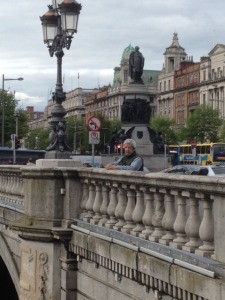 It was a brief flight.  Heathrow to Dublin airport in a little over an hour.  No time for a movie.  No time for any real food.  I looked across Mariam’s lap and watched the fields of Wales slide under us at several hundred miles per hour.  Still, when we landed and took the taxi to our hotel, we felt the need to take a walk.

I hadn’t been in this curious city in thirty years.  I wonder why it took so long to return.  Was I avoiding something?  Like memories that were so pleasant that I didn’t want to shatter them with fresh images? I wanted to keep thinking of this place as a cracked photo yellowed with time and not a memory made of pixels.  We walked to O’Connell Street and took a left.  A block and a half and we were standing in front of the General Post Office, still showing bullet holes from the Rising of 1916 when the English shelled it from a gunboat on the River Liffey.

We walked to the famous Abbey Theater where the cream of the English thespians trod the boards.

Then we crossed the O’Connell Street Bridge.  In my mind, nearly as famous and important as the Tower Bridge in London.  There is a legend that states that you will always see a white horse when you cross the bridge.  Another legend says you will see an Irish prostitute if there is no horse.

We saw neither (as far as I knew…I know a white horse when I see one).  One wonders what will become of your day if you saw both.  Or, even more ideal, a prostitute riding a white horse.  But I’ll save that story for another day and another blog.

We went a block into the section called Temple Bar.  It’s just opposite our hotel.  There were more pubs that one could easily count.  But the Garda (police), in their yellow vests, vastly out numbered the pubs.  It seemed like there had just been an upgrade in the terrorist rating…but it was more to do with the rowdiness of the drinkers than any bombs.  One Garda was riding a white horse.  I stopped to consider this.

I found a pub to rest in.  They were playing some traditional Irish music.  We sat for a bit and listened.  I took a photo of a pretty bar maid.  She seemed pleased someone noticed her behind the stack of empty pint glasses she carried.

The Irish are an attractive people.

Doubling back to the Liffey, we crossed the Ha’penny Bridge.  Small pad locks were beginning to collect on the metal bars of the railings.

Paris just recently dealt with the thousands of locks on the Ponts over the Seine…they simply cut them off.  Would this be the destiny of the Ha’penny locks?  Who placed the very first lock?  I wondered about this and lost myself in thoughts about whether they were still together or had they separated and left only a small chunk of metal or brass to rattle in the winter wind and signify nothing.

After dinner and a show of Irish dancing (think Riverdance with four dancers) we went back to the O’Connell Street bridge.

One would never guess it was a Sunday night.

I stood on the bridge and read a small plaque about a man whose carriage plunged into the Liffey at that spot.  I thought of ghosts.  Was the bridge haunted?

Was the bridge haunted by this poor drowned soul, or a thousand prostitutes…or a hundred white horses?