I stood in the soft loam, nine inches below ground level, leaned against my shovel, and thought about death and insects.  This is not a difficult thing to do when you’re helping to dig a grave on a day in May when the gnats and flies are biting ankles and arms.  After all, it is the Adirondacks.

Life is hard up here in the North Country.  The temperature can flirt with -40 F or the high for three days straight can be -9 F.  Yet, despite the cold that causes a finger to turn black and be amputated by a surgeon, the little annoying insects survive.  I get the science here.  They winterize themselves by simply not freezing, or if they do, some sort of chemical prevents lethal cell damage.  So, what seems to spend months in a state of near-death, merely needs a few days of warmth to emerge and find an unprotected patch of skin to bite and suck the blood (and they do).

Humans are different.  We don’t possess these uncanny abilities to stay alive when death is all around.  And, the tragic irony goes further.  Someone who was alive and breathing on a Friday afternoon, can be as dead as dead can be on Sunday morning.

Which brings us to cemeteries.  Many of my readers know that I am a volunteer photographer for an online group (something like Ancestry, but free).  I spend a fair amount of time roaming the forgotten, lonely country cemeteries in and around Franklin County.  I don’t find my fascination with cemeteries morbid in any way.  Indeed, I find them endlessly interesting.  I learn about local history, admire old headstone carvings, copy heartbreaking epitaphs and just sit and wonder about the lives that are behind the names on the stones.  I was roaming a large cemetery near Malone when a pickup truck stopped beside me.

“Kind of,” I replied.  These were two cemetery workers beginning on the spring burials.  I was thinking quickly.

“Do you dig all the graves with a backhoe?” I asked.

“Almost all,” the driver said.

“Well, this guy next to me is heading up to Brasher Falls.  He’s gonna dig one by hand.”

“I’m sure he’d love an extra hand.”  He then gave me directions.

Half an hour later, I’m waiting at this particular cemetery when the young man pulls up in another truck.

“I’ll bet you never thought I show up,” I asked as I approached him.

He extended his hand. “Ray,” he said.

I stopped watching and I picked out a shovel from his truck and began to dig.

I thought of many things.  The vast majority of human burials for thousands of years, were hand-dug.  I don’t know when the backhoe came on the scene, but digging a grave by hand will soon become a forgotten act of loving labor.

That’s correct.  I think about my taking a small role in preparing a hole for another human to be laid to rest is an ennobling act of a high order.  A guy on a machine is very different from a simple soul with a shovel and a blister.  While I dug, I made some quick mental calculations.  The grave was 8′ x 4′ x 6′.  That amounts to 192 cubic feet of earth that has to be moved.

I glanced at the sun.  It was getting low in the west.  We were about 65 miles from home.

“I won’t be able to help much longer,” I said.  I also had just lifted a sod piece to the tarp.  It must have weighed 40 pounds.  My back surgeon would have slapped me until my ears bled.

After another thirty minutes, I had enough.  Enough of moving soil and scratching insect bites on my shins.  I put the shovel back into his truck, gave him a cold bottle of water I purchased on the way, and said thanks and good-bye.

I’m sorry I couldn’t have finished the job with him.  I wanted to shave the sides and make everything just right to receive the old woman whose funeral was the next day.  I wanted it to be right for her.  I had no idea who she was, but this was going to be her final home…it had to be right.  But, I left that to  Ray.

I have no illusions about how hard it can be for many people to think about graveyards.  I’ve watched most of my family buried in St. Patrick’s Cemetery in Owego, NY.  I’ve stood in the chilly rain and watched a broken-hearted family inter their mother.  It went well beyond the definition of sad.

I recently visited the grave of a former student of mine who was murdered by her husband.  I stood and reflected on her sitting in my classroom thirty years ago and smiling at my goofy jokes.

In a few weeks, I shall stand over the graves of my Irish relatives in a sea-side graveyard in Inishcrone, County Sligo.

As we drove along the country roads, I thought about the irony of life.  The insects “die” a temporary death during the deep winter, only to reemerge as hungry and voracious as ever.   An old woman lives in a hospice, in her home, wherever, and dies when the warmth of spring arrives.

One departs while one arrives.

It’s one of life’s exchanges.  I suppose it’s fair.

It doesn’t really matter.  There’s nothing at all we can do about it.  We can curse and scratch at the newly reborn insects…and we can cry at the departure of person.

I can’t spot any glitches in this.  If you can, you’re a better, more perceptive person than I.  For even the insect who comes back after sub-zero temperatures, must die at the end of the summer anyway.

No matter how you look at it, it’s a one-way street for every living thing. 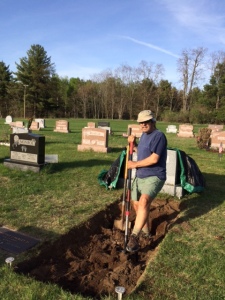