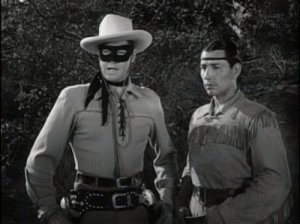 Media representatives, Native American leaders, cultural historians, gay rights activists and many cowboys rejoiced yesterday afternoon when two long-time partners against crime were united in a civil ceremony on a dude ranch outside Oxnard, California.  The marriage was held in strict privacy with only several hundred invited guests in attendance.  Reporters hiding in the hills and using high-powered spotter scopes were able to identify only a few attendees.  Among them were Johnny Depp, Bob Seger, Bono, Harvey Fierstein and Doris Day.  Bob Dylan’s Wedding Song was voiced by Lady Ga Ga.  Because of strong dust storms in the area, GaGa was forced to lip-sync the song.  The only tape available was a 1982 rendition by Liza Minnelli.

“Because of their on again, off again relationship, we had doubts the ceremony would ever really become a reality,” said Chief Running Water of the Potawatomi nation.  Tonto is a member of that particular tribe, but as a part-time actor, he has often been confused with playing a Mohawk of Ontario, Canada.

Neither Tonto or the Lone Ranger were available for comment.  Moments after the vows were exchanged, the two boarded a Tomahawk helicopter and were flown to a spa somewhere near Twenty-nine Palms.

Several friends close to the pair agreed to speak to this reporter on condition of anonymity.

“We can confirm the two exchanged silver bullets instead of rings during the ceremony,” said one part-time actor from Van Nuys.  “Silver is considered to be rare and precious, like justice, law and order, not to mention a human life…we think it was better than the old-fashioned ring-thing because when you’re out riding the range, rings can chafe the finger as you grip the reins.  We’re so totally into the bullet thing.  We think it’ll be a big deal in unions of this nature in the future.”

Asked about the unusual names the happy couple have used with each other over the years, one friend chimed in: “Well, we know that Tonto translates from the Spanish into a less than kind word, so sometimes the Ranger uses Toro, meaning “bull”.

I asked about the term “Ke-mo say-bee” and was greeted by blank stares by those standing nearby.  “We think it means faithful one or something like that.”

I pressed on because that was my job.

“How did the Ranger become known as The Lone Ranger.”

“It seems that he was a member of a party of six Texas Rangers who were tricked into an ambush by “Butch” Cavendish.  All the rangers were thought to have been killed.  This Native American rode by and found that one of them was still alive…barely.  He nursed him back to health.  The two recognized each other immediately.  The ranger had rescued the Native American when they were children.”

Apparently, the bond was made then and there and they have rarely been separated since.

“What’s with the mask?” I asked, blindly.  I thought I had pushed these guys enough, but I kept on.

“Well, to honor his brother, who was leading the group of rangers, the survivor fashioned a mask out of his older brothers vest.  He never revealed his identity until later in life to his Aunt Frisby.”

“It was the mask that apparently intrigued Tonto enough to keep hanging around the ranger,” someone from the back said.

“That’s right.  Say, I think you’ve asked too many questions.  Why don’t you get the hell off the driveway before I call Security?”

So, there you have it, folks.  Two strange men, always alone, always doing the right thing to help the helpless, finally seal their fate.

Right about now, they’re probably in a whirlpool spa somewhere on the edge of the Mohave Desert.

Word has it that they are going to open a landscape decorating business somewhere near Pismo Beach.