I stood hard against the tiled wall and made room for the rush of human traffic trying to pass me.  I was thinking about insanity and the blindness of powerful people to hold sacred something that once had beauty and class.

Beauty and class are rare commodities these days.

Somewhere, somehow something was missing.

I was waiting for the Adirondack, the train that would take us to Albany where our car was parked.  I looked around for the great wooden benches.  All were gone.  I had to wait inside an enclosed “waiting room” filled with plastic and metal seats.  The fast food outlets all sold the same wraps and bags of chips.  Somewhere, I’m sure, was a bar.  The small kiosk that sold the several daily newspapers were now Hudson News stores where I could get a hundred copies of Elle, Glamour and Men’s Health. I’m sure there was a shoe-shine, but I wouldn’t know where to look. 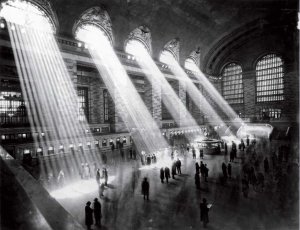 I thought of the thousands of GI’s who kissed their Bronx girlfriends good-bye during WWII.  Some of them came home.  I thought of the many others, soldiers, men and women, who went off to conflicts.  Some came home.

I thought of an out of work salesman heading for Chicago…there was a possible job waiting for him.  Sometimes he came home to get his wife and head back to the Windy City to start life over.

There were the thousands of runaway girls (and boys) who could afford a train ticket from Wichita or St. Paul who came to the City in search of fame or fortune, or just wanting to disappear into the masses.  A few made a new life.  Most didn’t.  But at least they were solvent enough to afford a coach seat.  The ones who couldn’t save enough from the waitressing job in Akron, had to arrive at Port Authority Bus Terminal.  So many ended up on 8th Ave. selling themselves for a bottle or a vial. 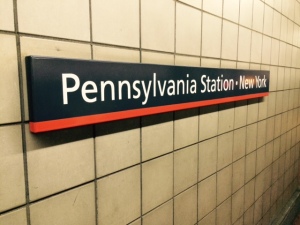 I looked for the Grand Staircase.  I found only escalators.  Where were the places where people stood and embraced?  Saying “Good-bye” or “Thank God you’re home”.  There was no place to stand and embrace.  Everyone was hurrying to somewhere.

Pulling rolling luggage, everyone stood looking at the big black board for the next LIRR departure or the next Amtrak arrival.

There was no place to stand and think.  So, I stayed pressed against the tiled wall. 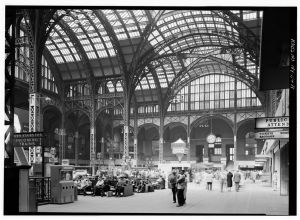 I’ve looked at the archives of Old Pennsylvania Station.  Things looked better in Black & White.  That’s the insanity.  The City razed the old station and built the place where I was now standing. 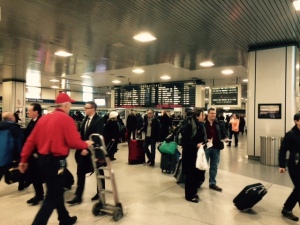 I saw my wife through the glass partition.  She was waving at me to hurry over because the Red Cap was going to help us get to Platform 7.  The northbound Amtrak, the Adirondack was on time.

The small bottle of water (water used to be free) cost about $3.00.  A bag of peanuts made me $3.25 poorer.  I looked over the turkey and cheese wraps.  More bread than turkey and cheese combined.  I thought about Ptomaine.  I passed on the wrap.

I slipped on my backpack, walked past four National Guard soldiers with AK-47’s on their shoulders and met my wife.

Before we boarded, I swallowed the diuretic I was taking.  Try dealing with that forty-five minutes later in a small bathroom on a train that swayed like sailboat in a gale.

Sometimes film directors will shoot several endings to a movie.  I’ve heard that Michael Curtiz had another conclusion set to go for Casablanca.  In this version, Ilsa does not get on the plane with Victor Laszlo.  One wonders.

Yes, one wonders.  Are sad endings better than happy endings?  Personally, I feel strongly that the Janus face of drama does indeed have two faces: Tragedy and Comedy.  After all, in all good comedy, there is a strong core of the tragic.  Chaplin can bring a tear to your eye.  Laurel and Hardy are every men, destined to make mistakes and go through life bumbling…like the rest of us.  I could go on.

I will go on.  Here are three very short tales (Part I).  I’ll do the set up…you construct your own endings.  In Part II, I will share my own alternate endings.

ACT 1–Mary stood with Ron on the platform of the west-bound tracks of the Erie-Lackawanna Railroad.  Her ticket stub had 4:20 pm stamped on it.  There was only one ticket and it was only one-way.  Mary did not plan on coming back to this town, not anytime soon…not anytime ever.

Mary and Ron were married five years and twenty-nine days ago.  They were crazy in love back then.  There wasn’t a hillside or shady riverbank location that was unknown to them.  They knew all the places to neck, kiss and make love.  That ‘making love’ is what started the great love they thought they had to diminish.  Mary never wanted a family.  She wanted Ron all to herself and the thought of sharing his affection with a child struck fear in her heart.  Ron waited outside the hospital room while Mary delivered the baby she didn’t want.

The infant could sense the lack of love from his mother.  This intense need on little Billy’s part was never met.  So, out of loneliness and a chill of the little heart, little Billy simply found another way to get love.  He let himself die to be with the Lord’s mother.

Ron could do nothing to stop this.  Billy’s loss was the beginning of an emotional barrier he built between Mary and himself.  Their marriage grew cold and soon Mary was talking of going to Chicago to live with her sister.  Who knows, she told Ron, maybe things will change with me.  Right now, though, I want to be apart from you and this horrid little town.

So they stood on the platform, waiting.  Ron was heartsick.  He loved Mary,  Indeed, she was the only thing he really did love.

He heard the whistle from the train approaching the station.  He looked at Mary, her eyes were dry and determined.  Ron wept openly and without shame.

Mary boarded the train carrying all she cared to keep in a small cardboard suitcase.  She turned to look at the wet eyes of Ron and as the train jerked forward, she blew him a half-hearted kiss.

Ron watched the train as it rounded a distant curve and was out of sight.

He found his car keys despite his tears. 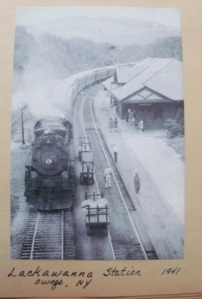 ACT 2–Gary Stebbins had been drafted.  He had been to basic training at Fort Bragg and was completing a weekend leave before being shipped to England.  It was 1944.

His mother, Mae, simply could not let go of her son.  She always felt she had an ability to sense the future…and at this moment, the future was a place without her only boy.  They stood in Penn Station waiting for the train to return him to Fort Bragg.  She was the only person seeing Gary off to war.  His fiancée was bed-ridden with the flu back home in Kingston.  The father, Harry, had been killed in a freak accident at a saw mill three years ago.

Three months later, Mae found herself standing in Penn Station again.  She wore a blue dress and didn’t bother to use make-up to hide the red eyes and pale cheeks.

Soon Gary appeared in the doorway of the arrivals area.  He was all smiles and proudly held his Purple Heart up to his chest.

That night, they dined at Delmonico’s. 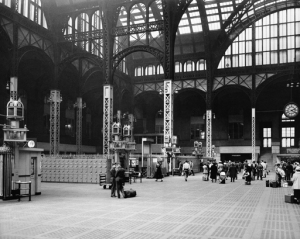 He had been a long-time smoker and failed to get the exercise the doctors had told him about a year ago.

Just then, the doors swung open and the orderlies pushed him past her.  All she saw was the sheets and part of his head with plastic tubes going into his nose.  She followed behind as they took him to ICU.  Nobody spoke to her.  Mavis was treated like a bystander.  After everyone left, she looked through the plexiglass window at her husband.  She could hear the beeping of the Machine.

She sat down and grabbed a copy of Good Housekeeping.  An hour later, the beeping stopped.  A nurse came out and told her the sad news.  Like a robot, Mavis walked to the chapel and lit a candle. 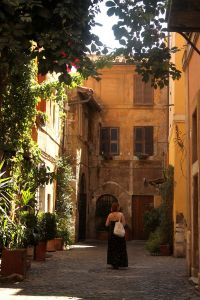