If you’re like me, you have a lot of time on your hands.  Maybe too much.  I’ve found that staring out of the window at the daily accumulation of snow passes the time quite well.  Sometimes I stand close to the window and my breath fogs the glass.  Remember that scene in Dr. Zhivago?  Unbelievably, this can get a little boring so my default action is to find something to update on my laptop…and watch the bar at the bottom of the screen move to the right, making my computer a better thing to own. 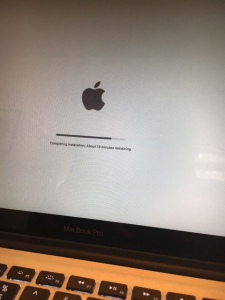 I found myself staring out of the window this afternoon.  There was plenty of action at the suet cage and feeder as the birds (saw a Tanager today) fill up on sunflower seeds.  Of course, they should be busy nesting and mating but there’s no time for hanky-panky when survival is a first concern.  My hearing is still above average for someone my age, so I know I wasn’t mistaken when I heard two Finches talking:

“We came back from Capistrano for this?”

Another easy way to break the mid-spring blues is to book an appointment with your eye doctor.

I knew there might be trouble when I sat down in the waiting room and began to shuffle through the magazines.  A copy of National Geographic caught my attention.  There was a rock climber on the cover so I was naturally interested.  I used to rock climb, back in the day.  My friend Greg and I would drive to the “Gunks in the Catskills and walk around with a brilliantly colored Perlon rope and lots of climbing hardware like carabiners and chocks.  The gear clanked a lot and we liked that.  We were good, and the more we climbed, the better we got.  I guess that’s an obvious thing, that practice makes perfect.

As I turned the pages in the Geographic, something felt amiss.  I checked the cover.  It was the April issue so it should have been filled with the hot new stories from around the world.  But, something was still amiss.  I checked the cover again.  It was April alright, but the year was 1996.  I did some simple head math and realized that I was holding a magazine that was 22 years old.  What does that say about my doctor?  What equipment did he have back there?  Call me naive but did they even use eye charts back in the mid-1990’s?  I doubt it.

I put the Geographic down and began to go through the other offerings that were there to make the time easy passing.  I saw a Country Living, six copies of Highlights, four copies of Bow Hunter, the latest issues of Golf, People and Time.  Under those I discovered a six month old Reader’s Digest, two issues of Good Housekeeping, one copy of Rotarian and one copy of Where To Retire.  I prayed the doctor was running late.  I had a lot of reading to do.

It was then that I saw the Holy Grail of doctor’s office magazines.  The Pennysaver.  Pinch me, I’m in heaven.

I began to leaf through the issue.  So much to get and so little time.  There was a quarter pager ad with the heading: MILITARY SURPLUS.  The first item in the ad was for Black and White Mickey Mouse Boots.  Did I miss something in some war?

The next page had a small ad that simply asked: GOT MUD?  There was a phone number listed but I forgot to jot it down.  Next page sported an ad: ELVIS COLLECTIBLES.  The location was Malone, about 30 miles to the north.  What poor soul’s life had gone so bad in Malone to force him or her to part with anything about Elvis?  I made a mental note to not look for real estate in Malone.  On the same page was a large ad that said: WARNING: DON’T BE A VICTIM OF ‘GHOST’ TAX PREPARERS.  Ghost tax preparers.  There’s a story there somewhere but I didn’t have time to make notes.

They were calling me.  It was my turn.  I asked for a moment to check one last ad.  ANTIQUE AND COLLECTIBLE CARS 1937-1977.  I almost tore the ad from the page.  Here, finally, was my 1952 MG!  Just before I ditched the paper, I caught sight of one last ad.  It was for a free bag of Real Country Dog Food.  When I saw the words: U Pick Up, I headed back to the exam room.

My head was spinning.

I sat in a reddish dentist-like chair.  There was a chart of the Anatomy of the Human Eye.  I wondered how they got this drawing.  Someone had to have had their eye sliced in half longitudinally.  I shuddered.

The nurse left to get something and the doctor hadn’t yet seen me.  I was free to look around.  I was quite startled when I looked at the wall in front of me.  There was a mirror and it reflected the eye chart that was on the wall behind me.  Now, if it was being reflected in the mirror, the chart had to be printed backwards.  Sounds like a lot of trouble.  Why didn’t they just pin a chart to the wall and forget the mirror?

[So where is my reflection?]

The mirror.  That’s when things got really spooky.  I was looking directly at the mirror, but there was no reflection of me.  Now, I know that happens in vampire movies, so I had to think things over.  This was scary.

I’d rather be back home staring out at the snow falling than to sit in an exam room and hope I was wasn’t among the living dead.

[All photos are mine except where otherwise noted.]