I’m not a collector, really.  I do have quite a few paperclips but I wouldn’t call it a collection.  My fondness for fountain pens and Moleskin notebooks is legendary, but I practice self-control…most of the time.  My grandmother’s barn was filled with a mountain of old tires, but they weren’t hers.  They belonged to my step-grandfather who was convinced that he was going “make a killing” in the rubber market when the next World War broke out.  Now, he was a collector.  I don’t think I own even one baseball card.  I do have several Bob Dylan concert tee-shirts, but they are never to be worn.  Somewhere among the many items I have from my father’s house is a Vote For Ike and Dick button.  I don’t know how we came about owning it since my parents were New Deal Democrats.  I don’t have a shadow box filled with butterflies stuck through with pins. (More on that later.) I have a fair number of CD’s but not nearly as many as my son-in-law, Bob.  He could open one of those booths in the court of a Seattle mall and make a fortune.

Bottom line here: you won’t see me on any episodes of Hoarders.

On one of our road trips I chanced to buy a rubber band ball.  I’ve spent way too much time trying to figure out how this ball was put together.  It continues to baffle me.  If any of my readers know how they’re made, please text me.  If your explanation has to do with having a double life in Honduras or China, the secret will stay with me. 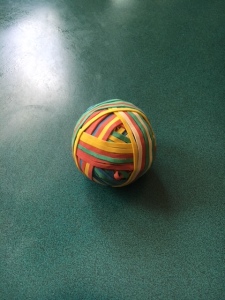 A few nights ago I was in my office/library pencil editing a chapter of my next novel.  I was tired and my creative juices were running dry.  (Actually, they’ve been running dry since 1959.)  It was then that I noticed something behind my Staples pencil holder.  It had been there, semi-hidden, for about six years.  I pulled it out and parts of it flew away.  It was a milkweed pod (Asclepias sp.) that I found in a field a year or so after we moved here.  I’ve always found the milkweed seeds and their bounty of fluff a miracle of nature.  Perfect dispersal method.  The wind.  These little puffs will drift about on the slightest breeze seeking a new home to grow up in.

One reason I brought the pod home was to give me a chance to look at the seeds through my new binocular microscope that I nagged Mariam enough into buying.  Hey, I was a Science Teacher for 35 years!  You can’t turn that off by relocating to the middle of nowhere in the Adirondacks. (Note to husbands: if you nag her enough, your wife will get it for you.  Just don’t start with 1953 MG’s, Adirondack Guideboats or any kind of sailboat that sleeps 6.  Work up.) 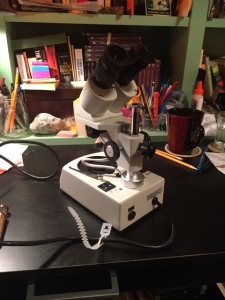 [My binocular microscope. Photo source: Me]

I began to ruminate.  By my taking this one pod home that day six years ago, I had prevented the growth of a large number of new milkweed.  How many?  Well, I went straight to Google, of course.  I found that the average pod contains an average of 226 seeds (Wilson and Rathcke, 1974).  One doesn’t have to be Stephen Hawking (God Rest His Soul) to calculate that, if all the seeds were viable, I had prevented 1,356 potential milkweed plants from taking root.

The implications depressed me.  I had broken a natural chain of events.  I had disrupted a cycle of nature, a small one to be fair, but still I had to own the sin.

So, what’s the big deal? you may very well ask.

Well, once inside Google, you must stay inside Google.  Follow the paths of limitless information and you might be surprised where it leads you.

Who doesn’t love the Monarch butterfly?  Nature Centers around the country celebrate.  4-H clubs, Scouting groups of all kinds have Monarch activities.  (My daughter made a special study of them in her elementary school science class). And, here’s the bit that will haunt my dreams for years: the milkweed is essential to the life cycle of the Monarch!  The caterpillar stage eats only milkweed.  They can not survive without those little seeds.

And, (I can’t cite references on this) the Monarch butterfly is listed “at risk” on some nature websites.

My story, then, ends here on a dark note.  Have I contributed to the “at risk” factor of the Monarchs?

In some minuscule way, I did.  And, if my actions were repeated by even 1% of the rural population of the Northeast, the beautiful butterfly will find less to eat and more to die from.

The Monarch butterfly; the name by the way, in Homeric Greek means “one who urges on horses”.

But, there is something you can do to help right my wrongs.  Go to www.monarchjointventure.org and explore.

One comment on “Late Night Thoughts On Milkweed Pods”