I would strongly object to anyone who would dare call me morbid.  It is not morbid, in any sense, to appreciate and love old (and new) cemeteries.  It is not morbid to stand over a grave of a total stranger and contemplate his or her life.

I grew up in a small town in upstate New York.  Overlooking the village below was Evergreen Cemetery.  I could never tell you the number of times I’ve wandered among the monuments of those who walked the very streets I walked.  Every time I go back to my hometown, Owego, I spend at least an hour strolling the beautiful landscaped, 19th century burial ground.

When I moved to the North Country in 2011, to the Adirondack Mountains where I am closer to Montreal than to any other major urban area, I began to discover the charm of the small graveyards of this part of the state.  Some are hidden and silent among the pine trees, some are six feet from a corn field and some are on breezy hilltops, with faded red barns in the background.

Then, sometime in 2012, I believe, I came across a website called Find-A-Grave.com.  I checked it out and found out that they were seeking volunteers to photograph headstones for people, upon request.  These were folks that lived in Montana or Texas who were doing genealogical research or simply wanted to see the grave of uncle Robert or aunt Hazel.  These people would place a request to Find-A-Grave and I, as a volunteer photographer, would get the message via email.  I then would find the cemetery, locate the grave…take a photo…upload it to the website and move on.  My reward?  Hundreds of thank you emails from the people who made the requests.

“Thank you for taking the time to photograph the headstone of my aunt Martha.  I knew I would never see her final resting place because I live so far away and I’m getting too old to travel”.  This was typical of the emails I would receive.

Doing this, I have learned a great deal about local history and the stories of the families who were so much a part of this area.

I did this alone for a few years.  My wife probably thought I was just trying to get out of the house, until I invited her along on one of my “graving” afternoons.  She became my best partner in this ‘hobby’.  She had the sense to look for women’s graves through the name of the husband.  My number of photos taken began to soar.  At this writing, on a mild Indian Summer afternoon in September of 2017, I have contributed over 1,000 photo requests.

It’s been said by some philosopher that one never dies as long as someone speaks your name, remembers you or thinks about you and your life.

I hope some volunteer photographer will stand over my grave and speak my name…then I know I never truly died. 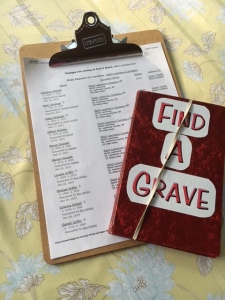 [An extra note: Below is a link to Find-a-Grave.  It’s all free.  You can open an account and make requests for photographs. And remember, it doesn’t cost anything.]