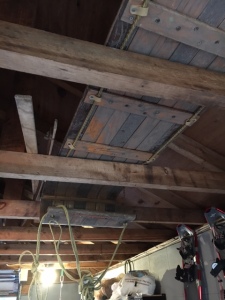 When I enter our garage from the door that faces our house, I don’t often look up.  What could be up there that I’m avoiding?  Well, there is an old oak bed head-board and foot board that was mine when I grew up at 420 Front Street, Owego, NY.  There are stickers of cowboys and indians on the head-board.  There are numerous tiny indentations of BB hits when I was young and used the head-board as a backdrop for my Daisy rifle.  The only other item of mine, settled and resting on the 2 x 4 inch cross pieces of the garage, is The Toboggan.

I stood and stared at the old sled for half an hour.  I brought it up here, to our place in the Adirondacks, intending it to be my first “project”.

My hands last handled this antique when we had to empty my father’s house after he passed in 2004.  Before that, I had placed it in the garage in Owego. Sometime in the early 1990’s, I stored it in the barn that was part of the house that my wife had owned in the years before we met.  The house was in Milford, PA.

I stood and stared and the memories came slowly at first and then I couldn’t stop them from filling my head with the past.

Was this the sled that my brothers tried to push me down the small hill behind our house in Owego?  There wasn’t much of a slope so I went nowhere until Chris or Denny ran behind me and pushed me onward.

That’s what brothers do.

Was this the sled that I took to a snowy hillside near Owego and jumped on behind Mary, my girlfriend, as we sailed through drifts of snow and patches of weeds and scrubs?  I don’t remember.

Was this the sled that came with me when I moved to a farm-house in the early 1970’s and I began my teaching career?  And also began a new role as a father to my 1 1/2-year-old girl, Erin?  I would take her on tours of the harvested cornfields that surrounded our lonely house on a snow-covered and wind-swept hill–pulling her behind me?

When I went ice skating with my brother Dan on a nearby frozen pond (before “they” broke the dam and drained the pond) and he was interested in film and I would pull them both while he filmed?  After Dan finished his project, I would skate backwards (I could, you know), pulling Erin on the toboggan and giving her a wicked swirl that would almost throw her sliding across the ice on her own.

The toboggan disappeared into the rafters of the slanted old garage behind our house in Owego–to be forgotten for years–with one exception.

I was informed of a great place to go tobogganing, the IBM Country Club in Endicott (or was it Endwell, NY)?  The golf course had a hill that was very popular.

So, one day in the mid-1970’s, we took the old sled down from my dad’s garage and headed for the slopes.  It proved to be a great place indeed.  Then I noticed that someone had built up a small snow bump.  I told Erin that before I would take her over it, I would have to first try it myself.

Off I went, toward the little bump.  The closer I glided toward the bump, the bigger it became.  When I hit it, I rose into the sky and felt I was going to land in someones backyard, across the river in Vestal.  I was airborne for what seemed like forty-five minutes, before I hit the ground.  The toboggan went one direction and my eye-glasses went another.  I simply came straight down onto the slope sliding in a third direction and feeling for broken bones before I came to an abrupt halt against a small tree.

“Mommy? Can Daddy do that again?” was all I could hear Erin cry out.

Was she kidding? My head buzzed for two days.

Back to my garage.  So there is the toboggan.  I had a fleeting thought about restoring it (once again) and mounting it on the wall in our screened-in porch.  It would require the removal of two antique snowshoes, but there are plenty of places on our walls to mount them in a new location. Ironically, the brand name stenciled in orange paint, on the curved bow reads: ADIRONDACK.

There’s a fair amount of dust on the old sled.  My best guess as to its age would be 90+ years.  But there’s one thing I am certain of; toboggans aren’t meant to gather dust.  Their made for the young and the old to ride on and scream from as it flashes past an old barn, an old tree or a fresh snowdrift.  They’re made to carry at least four adults, six kids and a metric ton of memories.

And, once it’s on the wall, I would never be asked to “do it again” on any slope, on any mountain or hill in the Adirondacks. 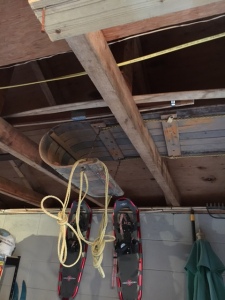 [The intended site of the restored toboggan]