The little apple of death hangs from the branches of the tree of death.

On a hot July day in 1521, Ponce de Leon, his body ravaged by agony, rolled his eyes toward heaven and, most likely, screamed his way into the hands of his God.  The man who searched for the Fountain of Youth in Florida,  found the Well of Death in Havana, Cuba.

He had battled the Calusa indians near the Calossahatchee River, not far from present day Fort Myers.  An arrow struck him in the thigh.  Normally, a soldier would survive such a wound–and he did, the wound was not the cause of his death.  It was a coating of sap on the arrowhead, the essence of the manchineel tree that killed him.

It could not have been a peaceful or graceful death.

After the battle, his army took him to Havana where he succumbed to the poison.

The Spanish called the tree the Arbol de la muerte, the tree of death.

The manchineel tree (Hippomane manchinella) is (according to the Guinness Book of World Records) the most dangerous tree on the planet.  To stand under it in the rain will cause your flesh to blister and fester.  If you stand in the smoke of a burning manchineel, you will likely go blind.  If you ate the little apple-like fruit from the tree, you would most likely die a painful death caused by your stomach lining being dissolved, like a salt crystal in warm water.

The indians of Meso-America, who knew of the trees potency, would sometimes tie their enemies to the trunk–ensuring an agonizing demise.

The toxins of the tree are complicated and hard to pronounce, but are spectacularly effective.

I sat on a tour boat in the Buttonwood Canal in the Everglades National Park and snapped a photo of the tree not twenty feet from where I stood.  To even brush against the leaves will cause a painful eruption of fistulas.  From the description of the effects, I thought that this tree would make poison ivy seem like a mosquito bite. 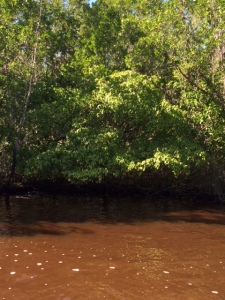 For over ninety minutes, I heard about alligators, crocodiles, water moccasins, rattle-snakes, coral snakes and vultures.  This is a landscape of death–these Everglades.

But hearing about the dangers that lurked and slithered around the roots of the mangrove trees, I still found profound beauty and nature in its most elemental form.  I only regretted that the Everglades were so plundered, assaulted and raped by the developers and agribusinesses that only a fraction of the original ‘glades exist today.