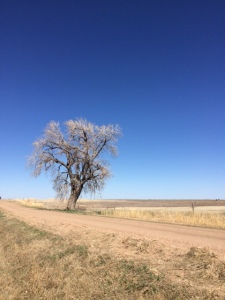 I didn’t write the following paragraph, but I wish to the eternal sky that I did…

Look out from the mountains edge once more. A dusk is gathering on the desert’s face, and over the eastern horizon the purple shadow of the world is reaching up to the sky. The light is fading out. Plain and mesa are blurring into unknown distances, and the mountain-ranges are looming dimly into unknown heights, Warm drifts of lilac-blue are drawn like mists across the valleys; the yellow sands have shifted into a pallid gray. The glory of the wilderness has gone down with the sun. Mystery–that haunting sense of the unknown–is all that remains. It is time we should say good-night–perhaps a long good-night–to the desert.

These are the words of John C. Van Dyke in his 1901 book, The Desert.  It is part of an anthology that I am reading, The New Desert Reader, edited by Peter Wild.  An excellent collections of historical and recent reflections on the mystique aura that is the Great American Desert.  I read this while I am tucked snugly into the R-pod, after several hundred miles of driving on the endless road…the Forever Road.

[The Vermillion Cliffs of Arizona]

As the trip odometer on the Ford clicked over another tenth of a mile at 44.4 miles from Dodge City, Kansas, I pulled the last of the iced coffee through the straw.  The morning sun had been glaring down on and warming up my icy brew for about thirty minutes.  The sun is strong here in the Great Plains–the prairie–now that spring is approaching and even my Starbucks thermal mug, decorated with a few stickers (I had removed the “Don’t Mess With Texas” label…too big!) couldn’t keep ice being ice for very long.

I stared at the road ahead of me.  We’ve been traveling since mid-October.  The road seems endless.  The road seems to go on forever.  The road is infinite for those who choose to drive it–like the surface of a basketball is infinite to an ant crawling on its surface.  One could go on until The Rapture (expected by some to occur some Thursday afternoon in a few months).

In a few days we will be crossing the Mississippi River.  “Big Muddy” separates the west from the east.  Behind us–can I still see them in the rear-view mirror?–are the waterless gulches and salt flats of Death Valley, the Full Moon of Joshua Tree National Park, the Buttes of Monument Valley, the shockingly painted Vermillion Cliffs of northern Arizona, the terrifying beauty of the canyon of the Virgin River in Zion National Park and the vast and forbidding mother of deserts, the Mojave.

[The road into the Mojave from Twenty-nine Palms, CA] 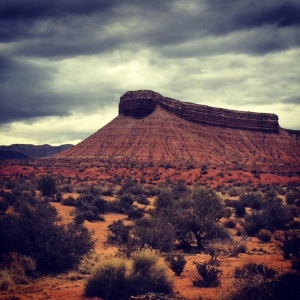 [Mariam and me at Four Corners]

It’s all behind us now.  And, I am sad at the thought that it may be a few years before I return, return to try to comprehend the comfort I took in those emptiest of places.  Collectively, the locations we visited in the southwest, attract me like a colossal lodestone.

As one who was born and raised in the northeast part of America, I was used to green in the summer, scarlet leaves in the fall and the white of snow during the shortest days of the year.  It shocked me to realize that there was more grass in my backyard in Owego, New York, than in 10,000 acres of the Nevada desert. 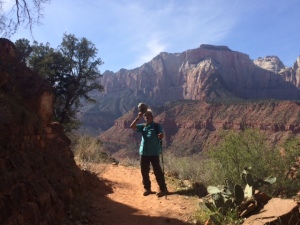 At night, the sky was visible from horizon to horizon–half my field of vision–and filled with more stars than I have ever seen (with a few exceptions).

I spent this day trying to find something to fix my eye on.  Is it an exaggeration to say that the Kansas prairie stretches so far that you can discern the curvature of the earth?  Maybe.  Yes, I tried to find something to focus on except the endless road, the white or yellow lines, and the sky.

I drove through the Wolf Creek Pass and paused at the Continental Divide at approximately 10,000 feet.  Out here, the tallest structures I can see–and I can see them twenty miles before I speed past them–are grain silos.

There were times, in the last few weeks, I felt that I could have been walking on the surface of Mars–the red desert–or sitting on a lunar landscape.  Now, with each passing mile, the backyards, malls, fast-food outlets and football fields are beginning to look more and more familiar.

The prairie is quite fascinating in itself, but the deserts of California and Nevada and Arizona have the bonus of being ringed by mountains.  I’ve read that when the Plains Indians were forced to move to reservations in Arkansas and Nebraska, they nearly went mad from the monotony of a featureless landscape.  It’s been said that these once noble masters of the deserts took to climbing trees to see–just see–as far as their eye could allow.  But, no mountains were in view.

I’m going home.  One of the first things I intend to do is watch the 1936 film, The Garden of Allah, with Charles Boyer and Marlene Dietrich.  In it, the Boyer character, suffering a crisis of faith, goes to the Sahara to search his soul for truth and meaning.  There he finds Dietrich, but that’s another story.  It’s what Count Anteoni, says to Boyer that sticks in my mind:

“A man who refuses to acknowledge his god is unwise to set foot in the desert.”

I’m going home.  It’s time to say good-bye to the barren and arid earth of the Great Empty.  But, to me, those places seem as interesting and limitless in their beauty as any Garden of Eden or Garden of Allah.

I like a place where a man can swing his arms…