“Moonlight becomes you, it goes with your hair.

You certainly know the right thing to wear…”

For many years, the Full Moon has fascinated me.  In the North Country, in the death-like silence of the mid-winter, and the snow on the ground is seven inches deep, and bending the branches of the cedar trees, you can read a poem, by Rilke or Yeats or Frost, using only the light of the moon to illuminate the page.

If you had a wall-map of Texas tacked to the paneling of your family room (and who doesn’t?), and you stood outside of the sliding doors (for distance), and you shot an arrow, aiming for the center of the state…you would hit the approximate spot where I’m sitting now.  That is, of course, if you considered the drop of the arrow due to gravity.  I’m not in the dead middle of the state, but I’m close.

We spent Thursday night in Junction, hard by the Little Llano River.  Tonight we are in a deserted RV park in Ozona, hard by nowhere.

I was out walking through an older section of the town cemetery as the sun slowly sank toward the western bluffs that ring this little town.  It was getting late and I needed to get back to the Rpod.  But, before I reached the car, another object in the sky caught my eyes.  It was the rising moon, waxing toward the Full phase. It will be a Full Moon on Saturday night, January 23; our fourth Full moon since we began our road journey.

I wondered about the Native Americans, the people who populated this valley long before white men with whiskers and whiskey came through.  I thought about how they died and returned to the elements.  And then, watched from the shadows as their children and their children’s children stood and watched this brushy, arid, and beautiful place give way to ranches and cattle drives.

I also wondered how these First People marked the passage of time. We have the modern calendar artificially divided into minutes, seconds, days, weeks, months and years…according to what some king or some Pope decided was convenient.

But, I wondered if our images of smoke signals were rooted in reality.  I learned that the use of smoke is an ancient tradition here in the Americas and not merely an invention of Hollywood.

Drums were often used to convey messages across long distances. But, this was information. This was not specific to the passage of time.
Sitting Bull probably never said: “I’ll meet up with you in twenty minutes at the other side of the mesa…”

No, it seems much more likely that they used the passage of seasons and the phases of the moon to convey time.
“Oh yes, my son, this took place many moons ago…”
“I will meet you near the bend of the creek in two moons…”

It makes perfect sense. The moon is as predictable as the rising of the sun. And, it’s conveniently segmented into twenty-eight days cycles (oddly, the same time frame as a woman’s monthly cycle).

So, tomorrow, night, in Pecos, Texas (any better name than that to invoke the west?) we will watch the Full Moon rise for the fourth time since we left New York State.

Our first was on October 27, in Brunswick, GA. It was a Blood Moon (or, more commonly, a Hunter’s Moon). I remember it was a warm night in Georgia. Halloween was approaching. It all seemed right.
Our second was on November 25, in Fort Myers, FL. I remember the overly warm night as I struggled to get the perfect photo of the moon through the palm trees. This was the Beaver Moon. 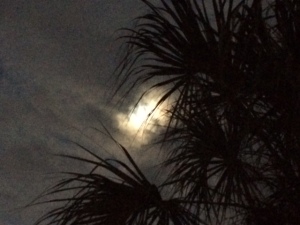 Our third was on December 25, again in Fort Myers.  It was a strange experience watching the moon rise, while standing against the edge of the swimming pool at our RV resort while Christmas carols drifted through the air from someone’s CD player.

So, like the persistent tide of the oceans, another Full Moon will rise tomorrow at sunset.  It will be the Wolf Moon. With any luck, the skies will be clear and the view will be profound and mystical, in its own way.  Such a common occurrence, yet so fresh and amazing.  Perhaps a coyote or even a wolf will howl at this moon…and echo through the canyon lands and mesas of western Texas.

Where the February, the Snow Moon find us?  Somewhere in the deserts of Arizona or the Mojave of Southern California, perhaps.  It may rise over the mythic town that will provide the promised cure for my troubled body and distressed mind.  The town that I’ve promised to tell you about…when I finally find it.

I’ll do my best to frame the perfect photo against a Sarguaro cactus.

If you’re up to it and the sky above your head is clear, step outside after the moon rises…and join me.  I’ll be in West Texas looking at the same dark mara and the same bright cratered features.  Let’s then wish each other a good night.

April 22, we will be seeing the Pink Moon from either Rainbow Lake, if the weather cooperates, or maybe we will remain for a few days in New York City and watch it rise, bright, dazzling and so urbane, over Queens.