One afternoon, in the late 19th Century, the fifteen year old brother of Maria Moreno complained about the way she was dancing.  She got angry.  His response was to say: “So, shoot me.”  Maria, who was sixteen went into her house and brought her father’s rifle.  She shot and killed her brother.  He should have let her dance anyway she wanted.  Maria was convicted and sentenced to the Yuma Territorial Prison.

One evening, again the late 19th Century, Elera Estrada, found out that her lover was being unfaithful.  She cut his heart out and threw it in his face.  She claimed in court that he fell onto her knife.  The jury didn’t buy her story.  Elvira was sent to the Yuma Territorial Prison.  Excuse the graphic description, I’m just writing about what I read. 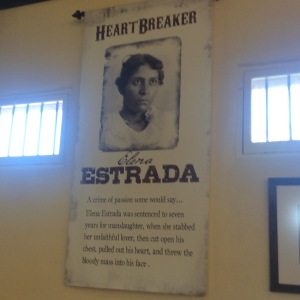 [Not your everyday crime] 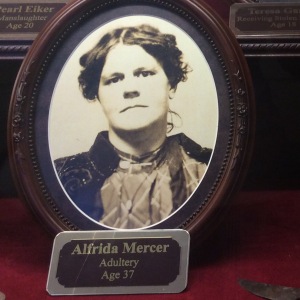 On Saturday, February 13, I parked our red Ford Escape and Mariam and I paid a small fee to tour the few buildings that was all that remained of the infamous prison.  I tried to imagine what a newly convicted person would feel like when we entered.

They would not have passed through a gift shop that carried hand lotions, lip balm, dream-catchers (made in China), post cards and books of the Wicked Women and Outlaws of the Old West.

They would not have entered a courtyard that was planted with blooming flowers and palm trees.  Inside the museum, there were display cases exhibiting the stories of the more colorful and interesting inmates.

There was a photo and story of Pearl Hart, a misguided train robber who teamed up with a guy named Boot.  They robbed one train and took away $421 in loot.  Both were captured and sent to different prisons.  Boot escaped and disappeared from the history books.  Hart went on to try her hand at acting.  She failed at that as well.  Her revolver was on display behind glass.

[Pearl tried her hand on the New York stage.]

There was the solitary confinement called the Dark Cell.  One poor soul spent 120 days in this room without light.  He emerged a “model prisoner” and never gave anyone any trouble after that.  My guess is that he had lost much of his reason inside this hellish enclosure.  That’s just my guess.

I tried to write down the names of the unfortunate souls who committed a crime, some hideous, like murder, and some that are not serious enough to require incarceration, like adultery.  I tried to look into the eyes of these men and women who suffered for what they did.  If you’re a religious person, consider that they paid twice for their sins, once in Yuma and again in Hell.  The two were the same if you looked deep enough into the eyes…those dark, wet, frightening, scared and pitiful eyes.  The eyes of people like Barney K. Riggs, Trinidad Verdugo, Henry Wilson, Donald Waters, Daniel Morin, R.L. McDonald, Jennie McCleary, Georgie Clifford, Pearl Hart and Frank Leslie.  There were too many to write down…too many to remember.

[A woman wrote to him while he was in prison. They married.]

I stood in the court-yard and tried to imagine the conditions…but it just didn’t get inside me.  Nearby, the truck traffic on I-8 drowned out any chance for quiet reflection.  A lot of traffic was crossing the Colorado River (what’s left of it) in and out of California.  On a nearby hill was a casino.  A bike path wound its way alongside the river.  The parking lot was half-filled with SUV’s…most with out-of-state plates.  Ours was one of them, easy to spot because of the two bikes mounted on the roof.

We drove down a small road (perhaps a hundred yards) and walked to the Old Prison Cemetery. Here are 104 small mounds, most are covered with rocks.  None are marked. These are the unfortunate souls who died up on the hill, inside the stone walls, of Tuberculosis, snake bites, murder, suicide and executions.

I stood and took a photo, noticing my shadow falling across the graves.  I looked to my right and noticed my car with the bikes, sitting in the hot sun…alone.  There were no visitors to this part of the prison exhibits.  I wondered if anyone ever came here to visit a distant descendant, take a pebble as a souvenir, read the plaque, swat the flies, apply SPF or to mumble a prayer for these unfortunate souls whose bones mixed with the sand and dust beneath the baked rocks.

[In the distance: A Ford Escape. Irony?]

There certainly was death beneath my feet, but there was also death in the eyes of those in the haunting photographs.  Those eyes.  Look at those eyes.

For a moment, they were forced to look at a camera…and in a sense into a society they mostly rejected.

But, for whatever despicable deed they committed, it occurred to me that each of them was born of a woman who loved them, for however briefly, before they grew up and found out what terror life can hold.

For a short time, they were fortunate souls.

The Curfew tolls the knell of parting day;

And leaves the world to darkness and to me.

Well, if you’re travelin’ in the north country fair

Where the winds hit heavy on the borderline

Remember me to one who lives there

She once was a true love of mine.

Well, if you go when the snowflakes storm

When the rivers freeze and summer ends

Please see if she’s is wearing a coat so warm

To keep her from the howlin’ winds.

Driving north from Saranac Lake to Malone, one notices that the country has a peculiar and distinctive appearance.  Mostly covered by trees, there is a the occasional pond or lake–even a farmhouse or, as you progress northward, a cornfield may come into view. 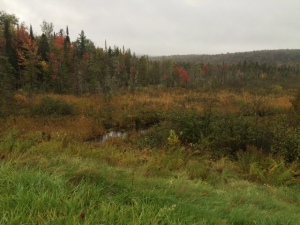 I’m driving to the county jail to tutor a few inmates in the correct methods to write an essay for a G.E.D. (now called, T.A.S.C.).  I sit and listen to a thirty-three year old woman in prison orange (with matching orange CROCS), tell a tale of a life spent smuggling drugs, addictions, abuse and even witnessing a murder.  Yes, I sit and listen.  I hand her a golf pencil and a few sheets of paper.  No staples, paper clips or pens that contain tiny springs are allowed.  I keep myself from staring at the diamond stud in her nose.  She wants her G.E.D. very badly.  I seriously question what meager skills I can offer this poor misguided woman who, ten years younger than my daughter, has already lived a lifetime of grief and bad judgements.  I feel helpless and not a little insignificant when I hear my voice explaining the meaning of a “Thesis Statement.”

As I drive, the clouds are low and heavy.  It has been raining steady all the previous night and day.  The spectacular colors for which the North Country is so famous, are muted in the dull monotones of a late afternoon sun that is hidden beyond a layer of gray, slate and approaching darkness.  Darkness comes early around these parts this time of year.  Usually, in these weeks of approaching winter, the dusk begins around the end of the day.  If the sun was shining, the shadows would be long.  But, it’s a world without shadows–because the day is one of clouds.  I am losing the npr station so I slip a CD of bluegrass into the player.  The group is called the Welfare Liners.  They sing a sad song.

I become aware of the date.  It is September 30, 2015.  In a few hours it will be October 1!  That should come as no surprise since there are only thirty days in September (April, June and November).  All my senses are now on alert.  I have yet to plan my 2nd Annual Countdown To Halloween blog series.  I will be weary and depressed when I get back home after the tutoring.  How will I ever have the energy to write an interesting post that will live up to the standards that my readers have come to expect?

I worry about these things.  But, something strange has happened in my subconscious.  My lateral thinking skills kick in.  Thoughts begin to fill my brain.

One terrifying thought concerns the date, October 1, 2015.  Another, relates to recent events that have happened.  I have stumbled on somethings so strange that I am fearful of revealing my discoveries.  But, I shall:

My fingers tremble as I type these words.  This is due to pure fear combined with the fact that the outside temperature is 37.8 F.  That isn’t far from the temperature from this dining room where I am writing this.  Hey, I’m always cold.

This, then is the first of an irregular blog post relating to Halloween.  The posts that will follow will be something like I did last year, a collection of scary and frightful things.  WARNING: The images I post may be too intense for those with gentle hearts and delicate natures.  Guys like Chuck Carter, for example.  But, be fore-warned.  You may be exposed to pictures of ghosts (I will state here that these images are in no way intended to disrespect those individuals who are “life-challenged”.  Some of my best friends are like this.)  There may be depictions of female vampires or zombies with cleavage.  I have viewed hundreds such images and I have selected only the most appropriate for general viewing.  I apologize ahead of time for this.  There may be graphic images of kittens dressed in goofy Halloween customs.  There will surely be photos, graphic photos, of disfigured and hideous pumpkins. 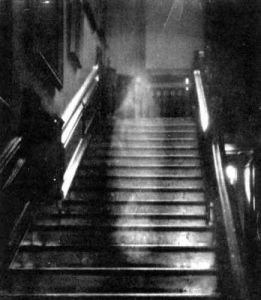 But don’t expect too much too soon.  I’m going to toss in a non-Halloween post on my ancestral castle in Ireland.  (Sorry, but I wrote it as a back-up to having failed at my speech at the reunion.)

I welcome public comment on the posts.  If you have something strange and frightening to share, please don’t hesitate, as long as it does not involve sleeping puppies.

And, speaking of curses–it is well-known that if a person reads a blog and fails to “like” said blog, well, I cannot be held responsible for the aftermath.  The most dreadful action, they say, is to take no action.  So, find the little button on my blog and click “FOLLOW”.  That way, my posts will come to you as email, along with all the other important emails you get every day.  (FYI–there a sale at Macy’s coming up!).

Sleep well, my friends.  Keep you collars turned up against the chilly winds of Autumn and keep your loved ones near you at all times. 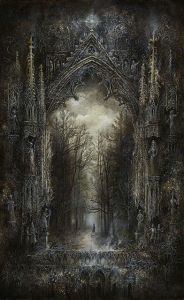