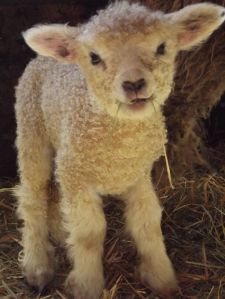 Remember me?  I’m Fluffy.  My human is the guy who writes these blogs.  I’m here to cover for him because he made a mistake and is unwilling to go public with it.  I’m also here to help him segue into two other topics about his recent time in Florida that he wants to “bundle” into one post.  First of all, he was mistaken when he posted his last blog and stated that the next one was going to be his 300th.  That blog was his 300th.  This one is his 301st.  Don’t be too hard on the poor guy, he’s been through a lot lately, all the driving, all the torrential rain, the humidity and the fact that his temporary henna tat is now gone from his forearm.  There are a few black spots left that look like insect bites, but it’s just the last bit of henna.

He also had to worry about how I’m being fed and kept warm.  You see, he left me in the North Country.  Don’t be overly concerned, though, I’m in a nice warm barn with plenty of straw and hay.  He thought about taking me along, but he assumed that there may be a federal law against transporting a lamb across state lines for humorous purposes.  And, besides, there’s barely enough room in the R-pod for his wife, Mariam, and the laptops, books, maps, art supplies and clothes.  I told him he could use me as a pillow, but Mariam is allergic to wool so that was out of the question.

Okay, so here are two topics that he wanted to combine into one posting:  Please try to read carefully and don’t forget to hit the “like” button at the bottom of the blog page.  For each “like” he gets on WordPress, I get a little extra chunk of a delicious apple.  You’d like to see me have that, wouldn’t you?  Of course you would…and have a Happy Holiday!  Remember the lambs in the nativity scenes?  Again, my future depends on you, the reader.  If my human gets to be really popular as a blogger, it could lead to book contracts and product endorsements.  Hollywood would be calling.  Then, I, poor little Fluffy (look at my cute little nose and sad eyes!  See my little legs, unsure and wobbly?)  If my human gets famous, I could end up scoring a major role in the Christmas Spectacular at Radio City Music Hall in New York City.  It isn’t all about the legs of the Rockettes (like my human thinks), no, they use real live animals in the show.

I could be a Broadway star!  It all depends on you!!!

THE WALLS OF FORT MYERS

Mariam and I are in this part of Florida for the first time.  I just finished reading a book about the over-development of the Miami area on the eastern coast.  We knew Fort Myers was subject to the same stresses of mall building and gated communities.  The gates to these developments are beautiful to look at and are executed with skill by landscape architects.  But, the walls…  The walls are said to keep the noise of the traffic out, but is that the only reason?  Are they a reminder that the million dollar homes behind the walls are to be left alone?  Are they some kind of class barrier?  I wonder.

The walls come in a riot of variations.  Here are two examples:

[A simple and functional wall]

[A “green” wall that is not too imposing]

I’d like to show more examples, but I think you get the point.  Besides, it worth your life to slow down or stop on these busy boulevards to take a photo.

Now, for something completely different.

THE BENCHES OF CENTRAL PARK

Before we set out on this long road trip, we had several days in Manhattan.  I was strolling through Central Park and stopped in the October light of a mid-afternoon.  I noticed plaques on some of the benches.  A little back-story:  Just before we left the North Country, the media was covering a local controversy about a college, a donation and a name change.  A woman was set to give Paul Smiths College $10,000,000.  The catch was that the name was to be changed to add her name to that of the institution.  In the end, a judge ruled against the name change because it violated the original deed of the donation of the land for the college, by Paul Smiths son.  And, the judge said that the college didn’t prove that the money was essential to the survival of the college.

Me? I was against the name change because I felt it violated the true nature of philanthropy.  But, that’s another story.  As I sat in Central Park and looked at the plaques, I sensed a certain humility in the naming and wording for each bench.

I came away with a gentle feeling of generosity with no real strings attached.  A simple plaque.  A simple memory of someone who probably enjoyed many October afternoons on that very bench. 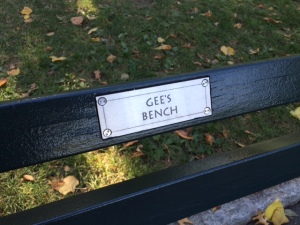 On a day last week when the sky took on a strange hue of Cerulean Frost mixed with patches of Brandeis Blue that hung, ever so delicately, over hills of Bulgarian Rose and Caput Mortuum, I happened to be having a chat with my octogenarian friend…a retired oceanographer.

“I am full of vicissitudes today,” she said, as she slipped her walker to the side of the park bench. “My tintinnabulation has increased a thousandfold.”

“Not only that,” she said with trepidation, “I am suffering once more with a bad case of Helminthophobia.”

“Now, that’s one for the books,” I replied. “Have you seen a specialist?”

“Oh, heavens, no,” she said stifling a sneeze with her forefinger beneath her proboscis.  “He would have to examine me and I have had Gymnophobia for years.”

[I thought to myself that after my recent bout with Eurotophobia and the resulting Defecaloesiophobia, I totally understood.]

“Nothing like airing your dirty laundry,” I said. “I guess all bets are off.”

“If it wasn’t for my awful Eremophobia, I’d dump my old man,” she said with alacrity.

“Hey, if you ask me no questions, I’ll tell you no lies,” she said with a sniffle.

“Now that you mention it,” I said as I shifted on the bench, “last month I suffered greatly with a case of Pteronophobia and along with that came a flare-up of my Proctophobia.”

“Psaw,” she replied, “at the end of the day that was as plain as the nose on your face.”

I looked at the sun dipping below the roiling hilltops.

“It’s getting late,” I said, thinking of my constant Myctophobia. “Let me walk you home.”

“Oh, you youngsters are all talk and no action,” she said with a wink.

As we stood up (it took me 14 minutes to straighten my knees), a young couple took our places.  They immediately began kissing like there was no tomorrow.

“Get a room,” I said, over my shoulder, as we walked away.