I’m standing at the window of our hotel in New York City watching the snow blow upwards. Fifty-two floors below, whatever snow survives melts quickly on Fifty- fifth street or perhaps Broadway. Winters in Manhattan are infamous for the wicked winds that gust in from the Hudson and clash with the bluster through the cross streets. The top floors of the high rise office buildings are invisible in the low clouds. Heavy coats do nothing to lessen the biting slashing winds that can cut through your outer layer like a sharp scalpel, like a razor or a saber honed to the width of several microns. These winds can turn your Burberry umbrella into fodder for a trash can. February in the City can be deadly to The Little Match Girl.

About 11:45 am on Tuesday, February 15 I will be lying on a table in the Operating Room of Mount Sinai Hospital. Most of you, my followers and curious readers, are well aware of my history living with and dealing with my lower back pain. It’s not a secret. I’m open to this revelation because I’ve discovered one thing that set me on my journey to Upper Manhattan. Simply put, I have a very hard time walking. I lean on Mariam as if she were a well-grounded oak tree. (This is not a good thing because she has a very painful right shoulder…but that’s another story or another blog. When I walk I shuffle like someone who just finished a bowl of gluten free Quaaludes for brunch.) But the most surprising aspect of my story is that I found out that I cannot ride a bicycle. Back in Rainbow Lake I tried to get on my bike only to find that I can’t raise my leg high enough to get seated. I would up with a mouthful of Adirondack sand. This was not a small inconvenience because I love to ride a bike. Every street in my hometown of Owego, NY has been peddled by me.

So on Tuesday I will lie on the surgical table. Doctors and nurses will check on me. I will get an Oxygen tube down my throat, an IV and a blood pressure cuff. The anesthesiologist, I’m told, will insert a catheter. Upon hearing this I will make an attempt to reach the door. The very thought of the catheter sends fear, horror and apprehension to my…. .

But by that time, it will be too late.

“I’ll be gentle” he whispered. “And besides you will be totally under.” I, hopefully will be wandering in the world of general anesthesia. What most amazes me about surgery this serious is the speed at which the anesthesia works. I’ve tried before to experience the drifting away thing and even counting down from 100 like it’s done in the movies. I stare at the clock on the wall. I stare at an entirely different clock in a room I don’t recognize. Who are these people dressed in green? Where am I?

I ask the first nurse that appears and ask her when the operation will begin.

“It’s all over, hon,” she said. “You’ve been asleep for about three hours.”

I’ll end this narrative now. There’s not much more to say. If it all goes well, I shall be able to feel like a normal human once again. If, for some reason the results are not too successful, I have a back-up plan:

I took a baby step over the curb and onto the sidewalk.  I poked along like an aged dog.  Several days after my back surgery…they said: “Get up. Get out. Walk a little. You’ll get stronger.”

My back hurt.  It was a #7.5 on the Great Medical Scale of 1 to 10.  My only thoughts were about whether I bit off more than my spine could chew.  How many blocks have I come?  How many to the movie theater?  I recalled the hospital stay.

I stayed two nights.  The surgery took about five hours…longer than I was told.  The Anesthesiologist fiddled with my tubes.  They said something about a catheter…I looked at them with big eyes.  Please, not till I’m under…for God’s sake, please!  I rolled over.  It was 8:20 am.

“If you want…won’t matter anyway.”

The earth opened up and swallowed me.  There were no lights.  There were no thoughts.  No dreams.  No visions…and thankfully, no light at the end of any tunnel.  I don’t even recall a tunnel.

Who were the nurses? What exactly did they do to me?  They took a disc and relieved the stenosis on my nerve.  Where was the disc? Wasn’t I supposed to get it in a little plastic bottle?  My back began to hurt.  What was my BP?  My temperature?  Who were these people?  I was fixated on my pain.  I owned this pain.  It was mine and no one else’s.

So, I’m on Broadway.  I’m off to see the new Coen Brothers movie.  My pain was on my mind.  How could I sit that long?

I paused next to a window of beautiful clothes for women.  I stared down at the sidewalk.  Pain was going to be my brother and sister, my mother and father, my old girlfriends, my wife, my lover, my old drinking buddies…and the pet dog I was going to walk for years to come.

No one was going to take my pain away from me.  Like a Wounded Warrior, I would wear it like a medal from the battles of the war.

Then I looked across the street…across Broadway.  It was nearing Christmas.  I saw an old man.  He carried a black plastic garbage bag.  I assume it contained all that he owned.  I used my powers to look inside his bag.  There was no pain in there.  He wasn’t carrying his pain on his shoulder.  Where was his pain?

Then, even from that distance, I saw his pain.  It was in his eyes.  He was probably ten years older than me, but he was more fit than a linebacker from the old Baltimore Colts.

But a life without love and without friends is a bitter pain indeed.

I forgot my pain.

I wept for the lonely, the unloved and the forgotten.

Through my wet eyes, I watched the old man continue up Broadway…to celebrate his own Christmas.

I hope the angel on the church steeple smiles down on him tonight…and every night. 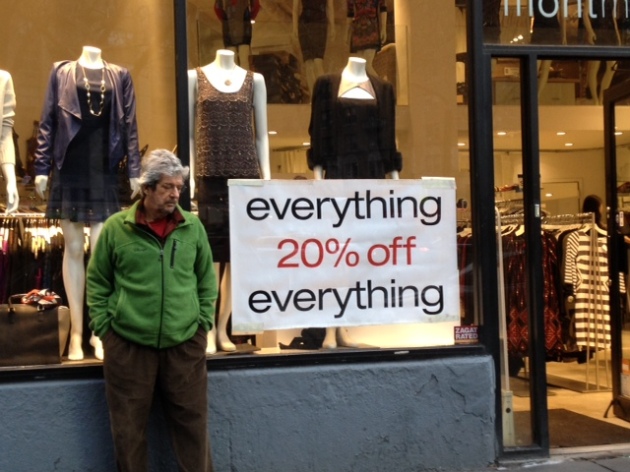