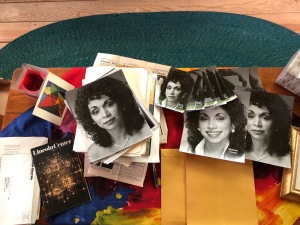 [A sampling of Mariam’s head shots]

We have something over our heads, above the ceiling in the room where we binge watch Big Little Lies, The Marvelous Mrs. Maisel and Doc Martin.  Some people would call it an attic.  Others might refer to it as a crawl space (one doesn’t need to crawl, really.  You can stand up straight unless you’re 2″ above the U. S. Norm of Healthy Heights.)  It’s accessible by a trap-door in our bedroom which allows folding wooden stairs to drop down.

I hardly ever go up there.  There is, perhaps, a two-week window of survival in our attic.  One is at the end of winter and the other is at the end of summer.  If you need to search for something in December, you’ll need an Arctic Expedition Parka and bib overalls, the kind the skiers wear.  The prowling about must be swift because hypothermia lurks in the corners.

If your needs take you up there in July, be aware that the ambient air temperature can approach the level that can melt lead, a little better than the surface of Mercury.

Like I said, I hardly ever go up there.

But, Mariam is a much stronger person that I am, so she ventures up the wooden stairs when she feels the need to get a box of something down.  We once stored many items in our attic but through the culling process, we have only a few items left there.

A few weeks ago, she decided to ascend into the heat and search for a box that might contain discardable items.  I stood at the bottom of the stairs and accepted the hand-me-downs.

Later, out on the coffee table of our porch, she opened one of the boxes.  What she found was ten pounds of memories.  She spread the items out on the table.  There were Playbills and Reviews of every opera and show she had ever done.  (In case you didn’t know, Mariam was a professional opera singer and performer years before she met me.)  She sang a solo at Avery Fisher Hall in New York City.

And then came the head shots.  Dozens of head shots, ready to send to agents.  Of course all were shot by a professional, but that extra touch wasn’t needed to bring out the glamorous features of my wife.

They were awesome.  Her short career was awesome.  The photo of her being hugged by Pavoratti was awesome…sadly, she couldn’t find that picture.

It’s probably in another box in the attic. 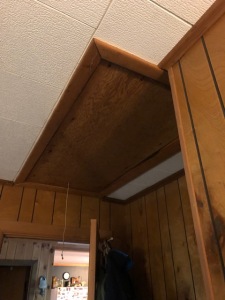 [The attic door to the Box of Treasures]