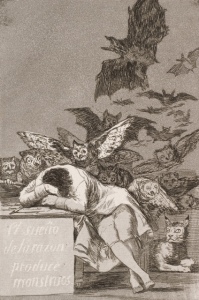 [NOTE: The following post is rated S for sad.]

When I was a young boy, about a hundred years ago, my mother would sit on the edge of my little bed and stroke my brown hair. It was well after my bedtime. I should have been sleeping the sleep of the innocent.

“What do you think you’re going to miss, honey?” she would ask, her voice soft and concerned. “Try to sleep, please.”

“Close your eyes so that the sandman can find you and help you go to dreamland.”

“I can’t,” I said again. I wasn’t been bratty or difficult. I just couldn’t stop staring at the ceiling. Nothing much has changed in all these years. I fear the setting of the sun and oncoming darkness. I plead to my wife to not turn out her reading light until I fall asleep.

And then in the morning, I wake from the usual nightmares with my heart pounding and my breath coming in gasps. (At least I don’t wake her up screaming and flailing about the bed like I did twenty years ago.

My dreams are full of frustration and anxiety. Typically, I’m caught in the school where I used to teach, frantic because I can’t find my classroom or my list of students. Sometimes I’m lost in a horrific version of a Manhattan that doesn’t exist on any map. I’m walking endless streets and wandering through a warren of a broken landscape. I’m trying to find my way home. I’m lost. I’m terrified and lonely…and then the dawn comes and I’m back at Rainbow Lake. 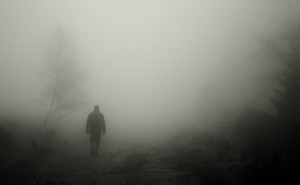 Out of breath and fearing what the next night will be like.

Bob Dylan wrote: “My dreams are made of iron and steel.”

My dreams are exercises in frustration and…loneliness. I feel somehow blessed if I can remember nothing of my nighttime. That is a rare morning.

I read that dreams occur during REM sleep. That’s not a good thing because it robs you of the deep sleep you need for a true rest. I never greet the dawn like they do in TV commercials…stretching and ready to take on the day.

I think my condition is inherited from my father. He struggled with insomnia for as long as I can remember.

My legacy to my children? I hope they have a love of books and reading and traveling…looking forward to drifting off with a good novel on their chest.

I don’t want to meet my daughter or my son on the midnight lanes I frequent.

I’d rather they find time to let the sandman into the bedroom.

I’m sitting on the sofa in our screened-in porch listening to the rain falling, heavily and with vigor, on our deck, roof and the new leaves of the maples.  I want another mug of Dorset tea, but that would mean going into the kitchen one more time.

I’m reluctant to do that.  There is something going on in the kitchen that causes me to suffer the most prolonged insomnia and induces the more horrific nightmares when sleep does finally come to my weary and reddened eyes.

I have only myself to blame…

I’ve always wanted to own an indoor/outdoor thermometer.  I wanted one even as a young child.  While the other boys in my neighborhood would be playing catch or stealing apples from the old orchard or riding their bikes around the block singing: “Back in the Saddle Again”, I would be dreaming of owning a device that would let me know what the temperature was both inside my home and outside in the yard. The only problem was that these instruments weren’t yet invented.  If I wanted to know how cold it was, I would have to don a coat and flannel-lined jeans and trudge out to the wall of the garage and look up at the mercury column, inside a glass tube that was attached to a Coca Cola advertisement.

Now, sixty years later, I own three of these wonderful little units.  There’s one in my “man-cave” in the lower level of our house.  There’s one still in the box, just as it was when I bought it at a Costco’s in Jupiter, Florida.

And, there is the one in the kitchen…on the narrow sill just above the sink.  It’s small.  It’s accurate.  And, it simply terrifies me.

I’ve written two posts on this Radio Shack model before (or maybe one blog and a Facebook post, I can’t remember).  So, for those who have been following me over the years, you may know what’s coming next in this particular report.  For those of you who are more recent “followers” of my stuff here on WordPress, then be afraid, be very afraid.  Do not let your children read this post.  If you’re weak of heart or a faithful church-goer, you may want to stop here.

You see, my friends, my wife and I bought this house in 2000.  We used it as a vacation home for a number of years, renting it out to people willing to come to the Adirondacks and get bitten by black flies and deer flies and mosquitoes while enjoying the hiking, boating and swimming that the Park offers.

We were living on the Upper West Side of Manhattan at the time.  It was the perfect weekend get-a-way retreat for us when we felt the need to escape the artistic and cultural life of a vibrant city.  It was only a mere six and a half hour drive (305 miles) from our front door on W. 93rd St. to the driveway at 58 Garondah Road.

Within a month or two of buying the house, I happened to be in the Saranac Lake Radio Shack.  I was looking over the radios and kits of all sorts when I spotted it.  There it was.  An indoor/outdoor thermometer!

Naturally, I bought it and within an hour I had it up and running.  I carefully placed the outdoor sensor outside our kitchen window and behind a shutter…in the shade.  It was this very same thermometer that I glanced at one evening while we making a quick winter trip to use our new L.L.Bean snowshoes, and saw that it was -36 degrees.  This was probably the first time that I began to question why we had chosen to live this far north.

I put in two AA batteries.  It was 2000.  At first, for a year or two, everything went smoothly.  Then, I began to notice something strange…something sinister…something that has grown more terrifying as year came and went.

“What’s wrong with thing?” I asked Mariam.  “It should have needed new batteries by now.  Nothing made since 1957 was made to last more that a few years.”

I knew this was especially true of batteries.  Why else would places like Best Buy, Wal-Mart and Radio Shack sell them in packages of sixty?

And, this, dear reader is where the story becomes unnatural…eerie…and downright frightening.  It’s been sixteen years since I put in those two AA batteries…and they are still working!  It’s not my imagination.  I will swear to the good Lord above that I have not replaced those two batteries.  I want desperately to open the back of the indoor/outdoor thermometer and check on the brand, but I am afraid to open the small plastic door.  I’ve seen enough Steven Spielberg movies to know that when you open certain items, unholy things come, like smoke from a clay Churchwarden pipe and the demons of the Other World are released.

I have enough guilt in my heart already…I don’t need to unleash Satan or whatever into this world.  It’s already too violent, religiously insane and terrorizing…and I’m not just talking about Donald Trump here.

But, something is powering my indoor/outdoor thermometer. Something sinister and unworldly.  It certainly can’t be the AA batteries…sixteen years is fifteen and a half years beyond their expected lifetime.

I still want a second mug of Dorset tea.  I think I’ll ask Mariam to go into the kitchen to make it for me.  I can claim my back hurts.