fric-tion (frik’shen) n. 1.The rubbing of one surface or object against another. 2. Conflict, as between persons having dissimilar ideas or interests, clash. 3. Phys. A force that resists the relative motion or tendency to such motion of two bodies in contact.

Friction is really good for only one thing…okay, two…no three. One important use is the simple act of striking a match. This would come in handy whilst camping, setting the stage for a special dinner for that special someone, arson, lighting a fuse of an M80 on July 4th or offering a light to that special someone you are hoping will come back to your place for that special dinner. (Full Disclosure: I would never date a smoker! Lips that touch tobacco shall not touch mine.) Besides, the above would have to take place in the rain or snow outside a Smoke Free bar. There are many ways to strike a match but I will leave those details for you, dear reader, to research. I will simply say: Watch any Bogart film. Striking a match is not to be taken lightly. The person striking the match must consider the coefficient of friction (fr). That is a number that is the ratio of the resistive force of friction (Fr) divided by the normal or perpendicular force (N) pushing the objects together. This is easily shown in the equation: fr=Fr/N. If you’re having trouble following all this, I would say: Trust Me or Get The Cliffs Notes.

Another vital use of Friction is the idea that involves static cling. As someone who has washed more than a few loads of soiled clothes, there is nothing worse than static cling. My personal solution to this problem is bounce. The only issue I have with dryer sheets is that the sheet clings to the clothes. This can be a very serious issue if you have to get dressed quickly. It is common when that special someone has a special someone who comes home from a business trip to Toledo. That rascal dryer sheet can cling to the back of your shirt or pants. People will stare. But static cling isn’t all bad. At parties it can be great fun to rub an inflated balloon on your shirt. The static will allow the balloon to stick to you. All kinds of obscene situations can be arranged.

A third and perhaps the most important use of friction is starting a fire. Putting matches (and Bic BBQ starters) aside for the moment let’s shed some light on fires. It is a well known fact that friction produces heat and enough heat can cause a flame to appear. We’ve all heard that one can rub two sticks together and make a fire. In fact, that is usually done in movies (Westerns). But if you ever saw two boy scouts rubbing two sticks together you would observe an exercise in frustration. It isn’t that simple. However, variations on that idea do exist. Take a close look at the photo below:

This method actually works. Notice the smoke wafting near the guys foot. This, dear readers, is friction in action! Personally, I would not attempt this in the heart of New York City. One problem is finding appropriate sticks. That would entail visiting Central Park. And most of the sticks readily at hand there would be covered with dog germs. In extreme cases of darkness, i.e., a Blackout, one could use a flashlight. However, when the AAA batteries lose power there is always the torch. (Not a British ‘torch’…that’s a flashlight), but a real kerosene-soaked torch like the angry villagers in Frankenstein (1931 Dir. James Whale). That would, of course, bring the Law down on you. You would likely end up making candles in Dannemora.

I will follow up this enlightening blog post with something else that has annoyed me for years…Gravity. 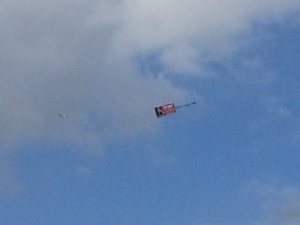 I’m sitting on the wooden walkway, on a green metal bench, sipping an iced coffee.  I’m watching a Cessna single-engine plane pull an advertising banner across the slightly blue hazy sky.  The banner is telling us to shop at the Tanger Outlet Mall.  I look around and realize that this is the mall I’m in right now.  Wow!  Is that a coincidence or what?  I’m grateful for this bench, because it’s located in front of the main entrance to the Polo/Ralph Lauren store.  Every time someone enters or leaves, I get a free blast of cold air.

It’s one of the few free things you can enjoy when you’re this close to Sanibel Island.

As I watch the Cessna fade into the humid air, I wonder why I’m spending my valuable time sitting alone at an outlet mall in Florida.  People flock here this time of year (we did) to escape the winters of the north.  How was I to know that we were arriving in the middle of one of the more memorable heat waves in recent years.

“This is very unusual for early November,” everyone says.  “Just wait, it’ll get better.”

I am very reluctant to cross the parking lot, get into my car, and drive back to our RV.  I know when I step off this deck and into the sun, I’ll pay dearly.  Yesterday, I looked at my indoor/outdoor thermometer that I mounted with Velcro on the wall just above my head where I sleep…if I sleep.  It displayed triple digits.  I began to worry about the propane canister that is attached to our L.L. Bean grill.  There was a warning on the label about exposing the little tank to…..degrees.  That part of the label was torn.

Was my cooking propane tank going to explode while I was at the Outlet Mall?

I thought about that for a minute.  There would be a fairly large explosion that would likely affect the trailers nearby–and that wouldn’t be hard because the distance between lots is quite small.  (I can sit in our attached tent structure and watch CNN in the RV next door.)  I pondered the damage of such a fire storm–the cylinder is new and full of propane.  The mushroom cloud alone would attract people in the pool or the Shuffleboard courts.  The fire truck that would arrive would block the narrow street we lived on and the people in the golf carts would have to make an extra block.

I hope our propane doesn’t explode.  I don’t even know if we’re covered by AAA for something like that.

After I dumped the watery iced coffee into a bright green trash can, I drove home.  I switched on our AC and immediately began to worry about how much electricity it would cost to get cool me off for ten minutes.  Mariam was working today–she does everything by phone and computer–so she’s over in the “library” taking advantage of one of the two “hot spots” for the WiFi in our resort.  I tried going to the “library” to do some writing and thinking but I found it very distracting.  Every few minutes someone would come in and borrow a Nora Roberts or John Saul book.  My concentration would be broken.  I’m trying to work on a novel, but a “real” writer needs time alone.  Even amateurs like me need a place to think things through in peace. 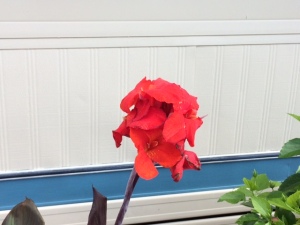 I guess I’m just listless in Fort Myers.  The humidity would tire anyone out, even perky people like Rachel Ray would begin to stir more slowly than usual.  I feel like a hostage to the weather.  Starbucks?  Too far away?  McDonald’s?  They won’t give me skim milk for my iced coffee unless I buy a half-pint container.  I don’t even have the energy to attend the Grand Opening of the new Walmart just a mile away.

My mind begins to wander as I lay back on our bed.  One possibility, you might suggest, is to go to one of the famous beaches and just sit under the umbrella and read or write while the ocean breeze comforts me.  But, they want $4.00/hour to park at these beaches.  And, besides, I’ve tried this approach but neither of us could get our umbrella into the sand deep enough.  The answer: I had to go to the nearest Publix store (they’re everywhere) and buy an auger so that we can drill a hole deep enough to support our shade-providing umbrella.  We’ll have to wait until our next beach visit to see if that works.

The other issue on my mind is that unlike most other places, we’re paying more for ice than for gas.  That doesn’t make sense to me.  Water isn’t shipped from the Persian Gulf and refined in New Jersey!  Crude oil is.  This is just water.  Ice runs around $2.50/bag (and lasts about a day).  Gas is about $2.09/gallon.  I did some mental math and came up with the fact that if we use a bag of ice a day, the cost will be $75.00/month.  You could rent a small room in a nice home in a tiny town somewhere in Ohio for that kind of money.

I’d like to look forward to our quiet little dinners in our tent attachment, but that presents yet another issue.  We sit at a little table that we bought at an RV store.  It has a surface texture that is very slippery.  When we used our new Corelle plates, and tried to cut a slice of fish, the plate slides around the table-top, nearly knocking over our plastic wine glasses.  I consider putting two adhesive Velcro patches on the table and on the bottom of the plates.  They would stay in place for sure.  But, if we both picked up our plates at the same time, we’d pick up the table as well.  Then the plastic wine glasses would surely fly–as well as the pepper mill and citronella candle–possibly burning a hole in our polyester rug.  Or worse…

I’m still laying back on the bed.  I’m still a little lethargic, a little listless and more than a little discouraged.

The reason I’m so down is that I recently checked my stats on my WordPress blog site.  My readership is falling.  I get three or four “likes” on the site.  I’ve looked at other bloggers and they get forty or fifty “likes” for writing six sentences on the shoes they’ve chosen for next Friday night.

Soon, I’ll have to turn off the AC ($!) and when I do the temperature will start to climb in nanoseconds.  I guess I’ll go out and sit inside our tent.  I’d like to put an ice pack on my head to keep cool, but ice is too expensive.  And, besides, it would slip off my hair when it begins to melt–which would be immediately.

Maybe if I used Velcro on the ice pack…