Like brave mountaineers, we weren’t bothered much by time.

It’s late August in the North Country.  The green of the leaves and shrubs are looking tired.  Some hints of the colors of autumn are emerging from the maples and oaks.  Late summer flowers like Black-Eyed Susans and Ragweed are everywhere.  The quarter moon rises after dark for a brief time before setting in the west.  The recent heat wave has broken, leaving the nights cool and breezy for sleeping.

In the Adirondack Park there is a region a few miles out from Lake Placid that is designated by the DEC as the “High Peaks Wilderness Area”.  I first hefted a pack and took to the trails as a twelve-year-old in 1959.  I’m still hiking these paths today…my pack is newer and my boots are better.  In those days, one could walk for hours and never see anyone else.  Now, the trails are crowded with climbers and people just out for a short time in the forest.

I owned a Sierra Club cup.  It’s wire loop handle of aluminum allowed you to carry it on your belt.  At every stream I’d cross, in those early years of hiking, I would stop and fill the cup with cold clear mountain water.  Soon my urine would change from deep yellow to a clear fluid.  Then, I felt, I was less filled with the toxic substances of normal life.  I was cleansing my body.

Now, I would never do such a thing without fear of getting the dreaded Giardia, resulting in extreme gastric pain, vomiting and diarrhea.  I carry bottled water from the Price Chopper supermarket in Lake Placid.  Price: $1.15 for 16 ounces.

I am on the Van Hovenburg Trail, the main highway to the summit of Mt. Marcy, the highest peak in New York State.  I’m not intending to go to the top today, I would have had to be on the trail at 6:00 am.  That was a climb I’ve made perhaps twenty-five times.  No, not today.  Today, I was only hiking with my wife and another couple to Marcy Dam.  It’s a 2.3 mile walk that I’ve done in the heat of summer, the chill of autumn with dazzling colors of the leaves against a sky so blue it hurts your eyes.  I’ve been on this trail in the dark, with friends, alone, and on snowshoes in -5° F weather.

When I was a teenager, I would often be found hiking in these hills.  I was fifteen…sixteen, full of vigor and carried a full Kelty packframe on my strong back.  Usually, I would prefer to let my brother, Chris or my friends hike ahead of me so I could walk in solitude.  I would often sing to myself, only to myself, the popular songs of the day.  Sometimes it was Moody River, sometimes it was Running Bear.  My songs led me to think about our return to Owego.  Hopefully, there would be a dance on the night we arrived home.  I thought of my girlfriend.  I would sing Teen Angel and think the dark thoughts of death and youth.

I don’t remember being tired.

Today, I’m not expecting a high school dance or my girlfriend.  I’m thinking of very different things now.  I think of my older brother, Chris, who first showed me the way to the top of the mountain.  His ashes were scattered in the forest only a few miles from where I’m walking.

In 1962, my legs were strong and the days would never end.  Now, my legs are that of a man who has had back surgery, leg surgery and foot surgery.  I’ll not be dancing tonight.  I’ll be home and sitting with a book on my lap…but, not without irony, still thinking dark thoughts…this time not of youth but of age.

I am carrying my load on 68 year-old legs.  I can feel how the years and miles have damaged my bones, my ankles and my lower back. 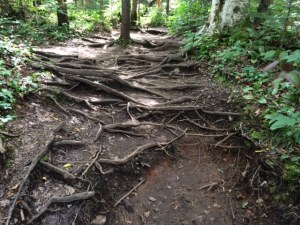 But, still I walk, stumbling over the same crazy pattern of tree roots that I tripped on fifty-six years ago.  I’ll cross the same streams, but on different wooden bridges.  Those old planks have long since rotted away.

Even when the bridges are no longer replaced and people stop walking these woods and begin to forget the cloud covered summits, there will always be a way to cross the stream.

I would search for a few large rocks and, taking great care, step from one to another.

Then I would find myself on the other side.  Then I would have to find that old trail again. 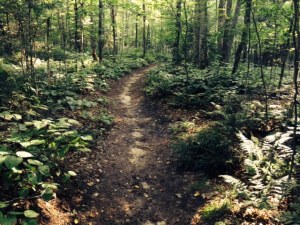