Just this afternoon, I found myself in a cemetery.  For those who are keen on details, it was Saint Alphonsus Cemetery in Tupper Lake, NY.  The skies were blue with patchy cumulus clouds; a departure from the thunderstorms we’ve been experiencing.  I love to stroll in cemeteries.  Usually, they are quiet places excellent for the necessary contemplation of Life and Death issues that we all should ponder every so often.  I had my favorite little notebook, a Moleskin, in my left shirt pocket.  I keep this book handy to copy interesting epitaphs, if I should happen upon one.  In my right shirt pocket was my iPhone (red protective case for those of you who are keen on details).  I had on an Amazon.com baseball cap.  I had already sprayed myself with my homemade bug repellant (see recipe below).  The gnats seemed to love the repellant.  I guess it’s an approach/avoidance kind of thing with those little bugs.

The tune “In The Mood” was running through my brain.  That’s because we had gone to the Lake Placid Center for the Arts last night to see and hear the Glenn Miller Orchestra.  I love big band music and the thoughts I was having last evening could make for a really cool blog.  Hmmm?  And, the female vocalist? Forget about it.  She came on stage like a sweet blend of Mae West, Jessica Rabbit and Betty Grable.  I was so intent on listening to her lovely voice and looking at her cherry-red lipstick, that I failed to notice the slit up her ankle-length gown.  They had to tell me about it later.

During the concert, I had turned off the ringer of my iPhone.  It was set on vibrate.

My wife had come along for the ride to Tupper Lake because she wanted to get some fresh air.  I mean we have plenty of air, fresh and otherwise at our house at Rainbow Lake, but she just wanted to go on a drive.  She took a short walk toward the Civil War section and then settled in the car to to escape the gnats.

So, there I was walking over a slight rise in the cemetery.  The lawn was freshly mowed and the scent of newly cut grass filled my olfactory system.  When I passed the headstone for Florence Rounds, my right chest began to flutter.  That’s it, I was sure I was having the “Big One” as Redd Foxx used to say.  For a moment, I thought that a cemetery is the perfect place to have the old ticker stop ticking.  After all, you’re right where you should be.  I asked God for the forgiveness for my few sins and put my hand to my right chest.  Then I remembered that my heart was actually on the left part of my chest.  So this wasn’t the Big One.  This was the vibrating iPhone.  It was Mariam calling me to think about getting home.  I said okay…just a few more stones to look at in an effort to find a collectible epitaph.  I switched my phone back to ringer mode and put it back in my right shirt pocket.

Quickly, I was lost in my reverie again.  I passed Anna Huntington and then Daisy Peets. Both ladies were about my age when they were called home, so to speak.

I was in a rather isolated part of the cemetery.  My cell phone went off again.  This time my ringtone kicked on.

I had downloaded Bob Dylan’s “Like a Rolling Stone” from iTunes about a year ago.  So, here I was standing in a lonely part of a cemetery and I’m hearing: “How does it feel?  How does it feel?”

My vivid imagination, for the briefest moment, had me feeling that it was the question sung by all those deceased people, some forgotten, some remembered, to me.  They wanted to know how it felt to be the one who was alive.  Maybe they forgot the sun and the rain, the clouds and the snow, the laughter and the tears, the joy and the sorrow of being alive.

“It feels pretty good,” I said, as I headed back to my car.

I was in the mood.

[Make Your Own Bug Dope]  This was put out by a friend of mine on Facebook several years ago.  I forgot who posted it, but thanks!

Get a 16 oz Spray Bottle

The photographic frame, measuring 3″x5″ sat on the flat surface of the headstone.

It’s a small quiet Catholic cemetery on the edges of the village of Saranac Lake, New York.  The winter snow was gone but no grass or Spring flowers had the courage, or time, to begin their life again.  Cemeteries are full of living, growing entities.  Flowers bloom.  Green turf covers the ground.  In this cemetery, fallen branches from tall pines, still green, sit on the ground.  There are hundreds of pine cones scattered about.

Amid all this growth and life, there are the mute stones that mark the resting places of people who walked the very streets and paths that I stroll.  Each stone has a name or names of those who lay below.  The dates carved into the stones tell the passer-by how long this man, that woman or this child had spent among the living.

Dead flowers, plastic flowers and potted shrubs adorn the stones.  Sometimes at night solar-powered votive lights glow with a spooky aura in the darkness.  Some enterprising funeral-industry worker thought it would be a good idea ($) to get the grieving family to pay for the small lights.  To some driving by after dark, one can perhaps make out Uncle Tony’s grave by the green light by the tree…just there to the left.  To others, like me, it’s a ghostly reminder of the loneliness graveyards can be when the sun sets.

Some stones have elaborate laser etched photo quality images of the couple, a daughter, a son, a grandparent, a set of golf clubs, a guitar, a pickup truck, a semi, a forest scene or the path leading into a setting sun.

This particular stone had a photo mounted in a frame.  The frame was separated from the backing.  The glass was dulled by abrasion and there was no reflection.  And, there was no picture of the deceased.

Who removed the photo?  A vandal? A parent? A sibling? A fiancé? A child?  Perhaps this was the last image…the only surviving image of the departed one.  I’m thinking is was too personal to leave out in the elements and best kept in a pocket, close to the heart.

Someone had the picture.  Someone carried the photo around with them.  They left only a broken frame.  I looked close and could almost see an after-image on the grey glass.  I couldn’t quite make it out.

But, it was of a person who, for years, had his or her likeness visible to anyone who cared to look.

Now, no one can see who lies six feet below the stone.

Only a name, dates and a block of granite are left.  But I did not miss the picture.  Instead, I thought how lucky this person is…to have something as a proxy.

I thought of the millions of people who lie, unmarked, in the soil of war-torn countries, famine stricken regions, roadsides and river bottoms.

The picture may be gone, but something is there for us to see.  Something for us to lay a flower upon.  Something to touch.  A place to pray.

On a morning, celebrating re-birth, I stand and think of these things.

Too many human beings don’t have such a luxury.

A few simples words about Mortality

It was a damp and warm day in mid-August.  I stood over the gravesite and heard the locusts singing in the nearby fields.  The stone was smooth, given its age and I had to drop to my knees to read the delicate epitaph on the lower half of the headstone.

It was a simple rhyme with a message.  But aren’t all epitaphs giving you a message?  Isn’t that the whole point?  To scold. To warn. To remind, yes, remind you of what your ultimate fate will be.

The church stood a few meters away.  It was a Baptist cemetery but the epitaph was without a promise of damnation.  It was a gentle ditty with a sweet cadence.  I closed my eyes.  I could almost smell the musty pages of the bibles mixed with the sweat of the congregation while they sang spirituals.  Perhaps a tent revival was promised for an upcoming weekend.

The names and dates really didn’t matter.  It was a mid 19th century stone, that I can remember.  The faint traces of a weeping willow tree could still be seen.  Who lay beneath the stone, under the sunken grass may have chosen the words.  Maybe not.  But all the same, he or she is playing out the story told in such simple words.  Their worries are over.  In our time, we read and pretend they are just words…not really meant for us…but they are.  We all know it.

For those of you who have eyes like mine, here are the words:

Great God is this our certain door

And are we still secure:

Still walking downwards to our tomb

And yet prepare no more.

And, here is the epitaph as I saw it.  The stone was almost too hot to touch: 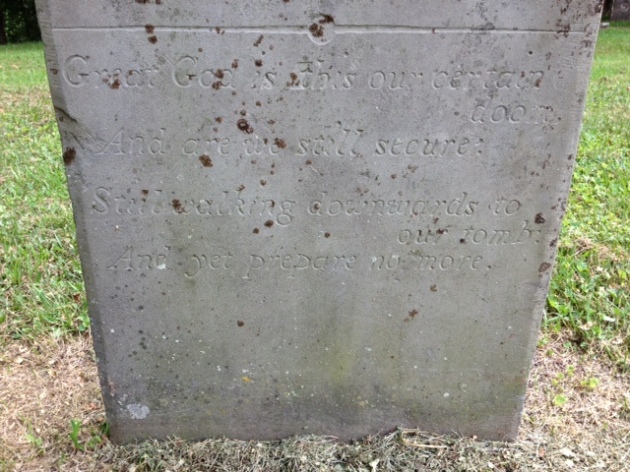 Sometimes, the stories that headstones tell you are long and often full of Biblical references.  Some I’ve seen are brief and to the point: “We Will Meet Again in Jesus”.  Once in a great while, one runs across an epitaph that is pithy and wholly understated.  The photo below is such an example.

It doesn’t leave much to reflect upon in terms of God or the future.  Here was a man.  He was three things.  Without question, he was a man of more than three roles, but this is all the family chooses to tell you.  The rest is up to you.  If you knew the gentleman, maybe you could add something.  But for those of us who never met or even heard of this soul, this is all we can look upon.

Gentlemen, turn your collar to the wind and lower your fedora.  Ladies, open your parasols and hold tight to them.  In Epitaphs: Part III, I will present you with the ultimate engraving that contains, in essence, an entire philosophy of life.  It is reputed to be one of the longest epitaphs in America. And it stands on a hill, in a beautiful cemetery, that looks down upon the town where I grew up.