Really great adventures always start with a sign taped to a window of a shop or to a wooden pole along the curb.  At least that’s how I found out about the circus.  We’re not talking about Barnum & Bailey here or even the Big Apple Circus that visits Lincoln Center every winter.  No, this is a small one-ring affair, very European, very English and very entertaining.

Once upon a time I saw a small circus just outside of Bruges, Belgium.  It should go without saying that I fell in love with the trapeze artist…a dark and beautiful being that floated, back and forth, over my head.  If you’re interested in the consequences that can come of having your heart stolen by a woman flying in the air fifty feet above you, then find a copy of the classic movie Wings of Desire.  You’ll get the point.

The Jay Miller Circus doesn’t pretend to be anything other than what it is.  A small traveling circus that winds its way through rural England.

After entering the Big Top from the bright day, I found myself greeted by forms that were indistinct to me…my eyes hadn’t adjusted to the darkness.  But I did notice a bright red jacket.  After we were shown to our chairs…set up in the grass. (Someone had scattered a bucket or two of sawdust on the green field to remind you that you were at a circus)

I went back to the red jacket.  “May I take your picture outside?  I’m going to write a blog about all this and you’re very colorful (and pretty, I thought).

A 5:00 PM, the lights went down.  And, as the cotton candy continued to be devoured by the many children, the Ring Master appeared.

[The Irish Ring Master. Total disclosure: this was taken half-way through the show, after the fog machine had been on for twenty minutes.]

What followed was a truly unique display of roller-skaters, jugglers, a state-of-the-art laser show, fire-eating women, ball rolling, magic and a woman who was spun in air above my head from a clamp attached to her hair!

Here are some of the visuals I took: 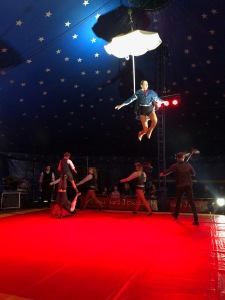 [Sand art projected onto a screen. It read Life Is A Circus] 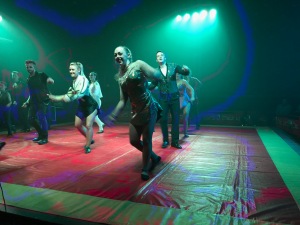 So, it was over.  I quite enjoyed the talent (the hula-hoop woman was sensational) and the effort, but my mind always drifted from the action, to the life beyond the show.  During the intermission, I went outside to get some fresh air.  I looked over at all the RV’s that housed the cast and crew.  What were their lives like after the Big Top came down?  Were any of them married?  Lovers?  Were they happy on the road?  Did they sleep well at night after they failed in an attempt at something?

The woman, early in the show, sat atop a very tall unicycle.  She put a little hat on.  She put a saucer on her toes and flipped it to her hat. She repeated this with a cup, then again, and again until there were four cups & saucers on her head.  She failed three times to get a small cube of ‘sugar’ into the last cup.  Finally the assistant handed her the sugar and she simply placed it in the top cup…without flipping it off her toe.  I wonder if she relives her mistakes at night.  Did she fret over her inability to finish her act successfully?  I wonder about these things.

I hope she will sleep well tonight.