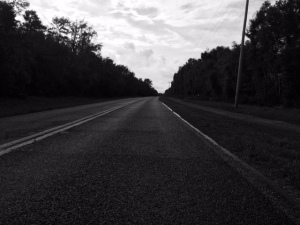 So much of Florida is simply and without question, beautiful.  The beaches come to mind.  The wetlands of the Everglades are near the top of the list.  The seemingly endless forests of the Ocala National Forest are a reminder of what Florida once looked like before Disney, Developers and Big Sugar got their hands on so much of the natural and unique beauty.

But, there’s a dark side as well.  This witching hour come at dusk, when the shadows lengthen and the details of the roadside becomes dim and indistinct.

I drove north, through The Villages, where we visited a friend, Nancy, who grew up a few blocks from where I did in Owego, NY.  I drove north, on roads that paralleled I-75.  We grazed Ocala.  We drove toward an RV park in Fort McCoy, near the middle of the state.

This was not Sanibel or Captiva Island.  This was a strange and unfamiliar country that got slightly more menacing as we sought our campground.

The roadsides lost a familiar clarity.  The houses looked a bit more run-down, some had sad Christmas lights still blinking in their yards.  Every mile or two, a gate at the head of a driveway, or a house, flew the Confederate flag.

I wanted to get settled in our site.  I wanted to collapse on the bed and play a few Scrabble games.  I wanted to nibble on a few vegetables and a cracker or two with a slice or two of Irish Cheddar.

Instead we drove along what seemed to be an endless road.  Our GPS was giving us contradictory commands.  My own confidence at map-reading began to falter.  Were we lost?  Did we miss a turn?

What about gas?  I hadn’t seen a station in what seemed like hours.  When you’re in an unfamiliar landscape, time can stretch and become distorted.

We finally located our RV park.  I don’t like to hear Interstate traffic when we camp…that would most definitely NOT be the case here.  There was no traffic noise at all.

A security guard was supposed to meet us at the gate-house and check us in.  There was no one there.  We followed the directions to check ourselves in.

We were listed for Site #50.  I was distracted by another RV in the exit lane.  The guy seemed upset:

“They knew we had to leave early.  I’m locked in!”

Indeed, there was a cable across the exit drive.  I went out to help him.  His RV was larger than mine.  He was traveling with a blonde that I could barely see through the smoked glass of the passenger side.  I helped him unhook the cable and I pulled the orange traffic cone to one side.  He drove off.

“Is there something going on here?” I asked myself.

The security guard drove up.  I told him we were heading to Site #50, but I couldn’t make out anything more than a small dirt road.

A few campers had fires.  People laughed in the darkness.  I settled in and felt hungry only for a few veggies and a piece of cheese.  I made a few plays on Scrabble but found the WiFi signal weak and uneven.  I gave up.  Mariam wanted a bottle of cold water, so I slipped on my shoes and went to the ice cooler in the car.  The moon, full only a few days ago (on Christmas Night), was Waning Gibbous.  Orion was bright and directly over my head.  It was a cool and pleasant night

I stood in the large mown yard and looked at the moon.  In a few hours it would be December 31.  I thought of my days in Florida, my sailing, my new friends and my new experiences.

I thought about my family.  Brian in New York City, Erin, in Washington State.  My grandson on Erin’s knee reaching for his dad, Bob.  I thought of my faithful readers of this blog.

And, as lonely as I feel at this moment, here in the middle of somewhere in Central Florida, that I wanted to wish everyone a Happy New Year. 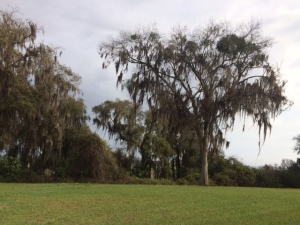