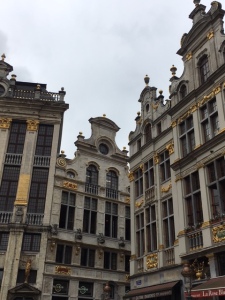 [Only a part of the Grand Place.]

I need to know the urban geography of any place I am in.  But, I had no idea about this city.  Changing the B&B we left to come to the Marriott was a great shift in plans. I could sleep cool and not suffer night sweats.

Besides we were closer to the city center and the city action. At first we thought we were on the main Central Place…but this afternoon, in a very light rain, we walked toward a steeple that had caught my eye.

When we got there we found it not a great cathedral or church but the Town Hall.

I watched as the middle-aged bride and groom passed and went into the room to be married. The Groom and I had eye contact.  It lasted several seconds…a long time in this kind of situation. I smiled and gave him a slight salute, he nodded and smiled into my eyes.  He noticed me…a nobody…on his way to middle-aged wedding. Mariam and I were married in our middle years. There was something about this man who, probably my age or more, saw in me and my wife the contentment that he was wishing for in his middle-age nuptials.

In my heart, I wished him the best of luck. I didn’t think I should take a picture. I wish I did.

But instead, I took some photos of the Grand Place.

We leave for London tomorrow morning.

[All photos are mine.]