I can’t recall seeing so many clusters and varieties of Fungi in my front yard in the sixteen years we have owned our home on the hill above Rainbow Lake.  I was on my knees examining a species that was unfamiliar to me.  I was on my knees in three inches of yellow, red and wet leaves that had fallen after a rain.  Too late to rake.  Too wet and heavy.  I also knew that when I stood, I would have two wet circles on the knees of the Route 66 jeans from the Malone Wal-Mart.

Something caught my eye.  Something almost completely buried in the leaves inches away from the mushroom cluster I was studying.  I brushed a few leaves aside exposing a wet and empty bird’s nest.  It must have fallen from the enormous bush in our front yard.

I looked at the nest and began to think of the family of avians that had made it their home for the spring and summer.

I had suspected something was different every time I walked from our front door to the car.  There was always a bird that would flutter close to me and make me duck.  Most of our bird activity was in the back of the house, observed from our deck, with the lake in the distance.  I never gave the creature much thought…until now…as I knelt beside what was probably its home.

How did I miss it all?

The spring was full of bird songs.  It’s what happens here in the Adirondack forest.  I knew in late April and May that the mating season was in full swing.  Some male bird (I never saw it long enough to make a positive ID…maybe it was a Robin?  A Sparrow?), was desperate to find a mate.  Our yard was like a bar at closing time.  The urge to procreate was overpowering.

He must have scored.  He must have found the one for him.  I was kneeling next to the nest that proved it.

I looked from the nest to our bedroom window.  Maybe twenty feet.  Ten more feet inside the room was my pillow. I stood up (wet knees and all) and walked over to a chair on our front deck.  I brushed aside the leaves and sat down, keeping an eye on the empty nest.  It suddenly occurred to me that the drama of life, birth and loss was played out a few feet from where I slept.

The chicks would need food.  That was the female’s role.

I thought of the thunderstorms that shook the trees around our house on more than one occasion during the summer.  The nest survived.  Then, when the moment, that unspoken unexpected moment arrived, one of the chicks climbed to the edge of the nest.  Another followed while the female urged them, one by one, to take the risk…to take the leap…to learn to fly.

Perhaps, I thought, the weakest chick fell and was made a meal by an animal.  Perhaps they all survived.  I’ll never know but nature is often unforgiving and the rules are not weighted in anyone’s or anything’s favor.

I do know that soon the nest was empty.  A breeze shook it from the branches.  It fell to the ground and the autumn leaves began to cover it.

Where did the birds go?  Are they migrating south as I sit here and write this?  Will they survive the coming winter?

I don’t have the answers.  After all, an entire Cycle of Life took place just thirty feet from my pillow.  While the Great Instinct of Life was being played out in the big bush, I was reading, playing Scrabble, tossing off a bad dream, napping, pacing, worrying, aging, weeping, staring at the ceiling, regretting, hoping or just sound asleep.

I decided I’m going to pay closer attention to that giant bush in our yard when the spring of 2017 arrives.  I’m not going to miss out on such a great story of life again.

But, I probably will miss something, some detail and the great drama will start without me. 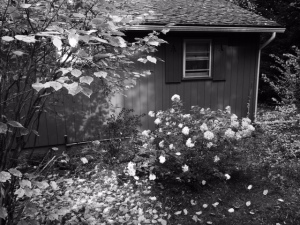 [The bedroom window.  The giant bush.  The nest is at the lower left of the frame…covered again by leaves.]