I sat in the Amargosa Opera House.  Half the seats were filled with ticket holders.  I looked around at the fantastic murals, I moved one seat away from the heat of the pot-belly stove and I watched the red curtain.  It was 7:05 pm on Saturday night.  There would not be an opera here tonight, no arias and no recitatives.  It would be an evening of ballet, with one ballerina, only one.  I didn’t care if the dancer was a few minutes late.  The ambience was enough for me.  We had parked the r-pod and had a room in the Amargosa Hotel for the night, the last room that was available.  It would be a three minute walk to our room…and a real bed. 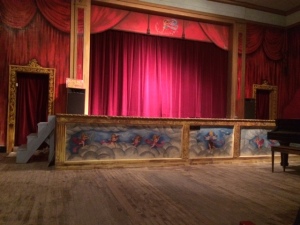 I should mention that the ‘town’ has a population of five humans, a very present cat…and I’m certain, more than a few ghosts.

The Opera House was built in the 1920’s when the Junction served as a focus of railroads that served several mines in the mountains that stand silently so close and so far.

[A door next to the Opera House]

The story goes: One day, in 1972, a New York City ballerina, Marta Becket was on tour.  She and her husband had a flat tire near the Junction.  She poked through the ruins of the old theater.  She had a vision.  She stayed on and repaired the old building…that had no roof.  She looked at the whitewashed walls and had a another vision.  She was an artist as well as a dancer.  She leased the structure, that was slowly falling apart, mud-filled and the victim of years of sand and scorpions…and began painting unbelievable murals on the walls.  And she danced there.  If no real person was in the audience, she danced to the audience that was painted on the walls.

The show went on…

The show is still going on.  Marta is now 91 years old.  But the sound of toe-shoes once again can be heard on the wooden stage.  The stage that is still lit by lights that are fashioned from coffee cans.  Jenna McClintock has taken on the mantle from the frail Marta Becket. 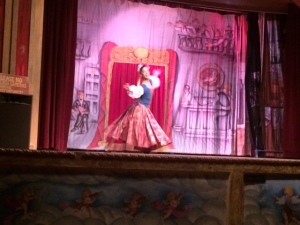 For an hour and a half, I sat transfixed by this tiny essence of pure art in the middle of an unforgiving desert.  Places like this are hard to find in the world today.  A place where the pretty ballerina will smile out to the darkness that may have a hundred people…or just three.  Pure art is like that.  It exists on its own.  If you are in the right place at the right time, you can watch it unfold…but it will unfold with you or without you…like the sunrise I would watch the next morning.

I was up before dawn on Sunday.  I walked a short distance from the little cluster of buildings that made up the Junction to watch the sun lift up and over the mountains of the desert.

I sat on an old telephone pole and took a picture of the sun as it crept over the distant ridge.  I looked back at the Amargosa Hotel and Opera House.  Mariam was still asleep.

Marta and the other four permanent residents were over there somewhere.

Somewhere, two ballerinas sleep.  One was nearing her final dance in life…and one was just getting warmed up.

[Sunrise over the Amargosa Desert]