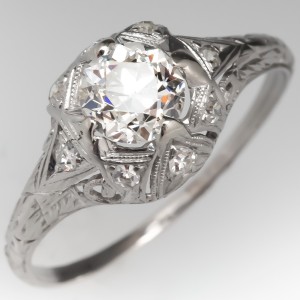 Eileen, a colleague of Mariam, wanted to meet us for a drink.  We were in New York City for the usual doctors appointments, meetings and our yearly Yankee game.

The three of us sat at the bar of Brendens Irish Pub on W. 35th Street.  I don’t know…maybe we were talking about Tolkein or circuses, but the topic turned to rings, specifically our wedding rings.

We each had a story about our wedding rings.  My story was probably the least interesting so I’ll start with me.  I wore my wedding ring for many years, removing it only for activities like kayaking and picking up hot babes in cheap bars (that was a joke).  Kayaking tends to cause my ring to rub against my finger.  But, for the last several years I’ve not worn my ring.  I began to lose weight and in the dry air of the North Country, my skin shrinks.  I performed a simple scientific test.  I shook my left hand several times onto the sheets of our bed.  The ring slipped off.  Not a good thing so I put it on Mariam’s jewelry tray where it sat until I decided it was time for action.  I needed to take the ring to a jeweler and have something put inside to hold the skin of my third finger.  This is what I got:

The nubs you see on the inside hold the ring securely in place.  I am now wearing the aforementioned ring 24/7.

Mariam’s story is a bit more interesting.  When we picked it out (Macy’s. circa early ’90’s), she chose a cubic zirconia.  It was a fine ring and fooled a jeweler once who commented on the quality of her “diamond”.  She worked at St. Vincent’s Hospital in those days as a Nursing Supervisor.  Often she would help in the bedside care…and that is how she damaged the facet of the cubic.  She continued to wear it for years, until we went to the jeweler on 86th Street and Broadway.  The woman behind the counter said it could be easily replaced with a new stone.  So we did it.

Here is her ring after the replacement:

But the real interesting story was the one told by Eileen, Mariam’s friend.

Eileen and her husband  are Filippino.  His grandmother had beautiful diamond earrings, given to her by her mother.  WWII brought the Japanese to the Philippines.  They weren’t a very friendly lot.  It is historical fact that the Japanese Army did some dispicable things to the Chinese and the citizens of the Philippines.  Knowing what was coming, his grandmother had the stones reset in nondescript (read ugly) metal earrings, which she wore throughout the war, hiding the precious heirloom in plain sight.  On her ears.

They survived the war.  His grandmother then had them reset as wedding rings.  One was lost.  The other was handed down to Eileen’s husband.  That is the one that resides on Eileen’s finger.  And she was sitting next to me.

I was taken by the story.  There are probably a thousand stories that are similar, but this ring…I was able to touch this ring.

As I did, I felt the weight of history, love, family, war and survival.

And, this is her ring: 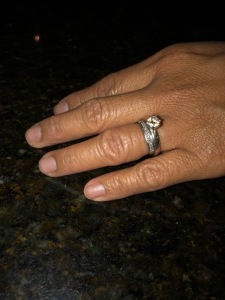 Rings are real material objects.  You can touch them, lose them, pawn them, steal them or even throw them into the East River.  But, they are also symbols of things that endure…like love.