A short time ago a friend posted this on Facebook:

Hooray! Only 59 Days Until The Summer Solstice!

[Diagram of the relative position of the sun (R) and the earth (L). Source: Google Search]

People think of BBQ’s, swimming, hiking and kayaking over seventy foot waterfalls.  Kites will fill the air at beaches.  Pyrotechnics are being prepared for the 4th of July.  Pom-Pom girls are practicing the baton tosses in their backyards while toddlers splash in small plastic pools under the watchful eye of parents, sitting in camp chairs, sipping bottles of Coors Lite.  Cans of Deep Woods Off are flying off the shelves at Target.  Tubes of SPF 65 lotion are in every picnic basket.  Big drinks with little umbrellas are served at pool-side.  The quarterbacks of the Fall flirt with the cheerleader/lifeguards of the Summer.  Sandcastles, surfing, hang-gliding, rodeos, NASCAR races, deer-tick bites and human pyramid water-skiing are the activities on any given day south of Manitoba.  (Actually, most of these events happen in Canada as well, but no-one goes up there this time of year to see for themselves.) 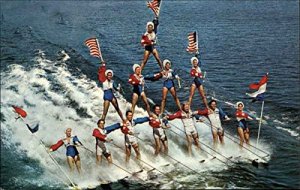 [This is how I spent my summer days at the lake. Source: Google Search]

And, in sunny England, the Druids are allowed among the Sacred Stones of Stonehenge to welcome the arrival of the SUN.

The Glory Days!  The Endless Summer.  Autumn is months away.  The Farness.  The Freedom.  The Freshness…it’s the eternal now moment everyone wants to be in and stay in.

And, best of all…it’s the longest days of the year!

[Allow me to muddy the waters a bit here.  The longest day?  No, of course not.  The length of the ‘day’ is and will remain twenty-four hours.  Can’t change that.  First day of Summer?  That depends on how you think of summer.  There are really two “summers”.  One is the Meteorological Summer, which traditionally is from June 1 to August 31.  This is when the thermal load begins to build in the Northern Hemisphere.  Hence, one can go swimming on June 7 because it’ll likely be warm enough and you are willing to hold your breath for twenty-three minutes underwater to escape the black flies.  But this post is mostly concerned with Astronomical Summer as described in the diagram above.  None of this seasonal stuff would happen if the earth was not tilted 23.5 degrees off the vertical plane in our relationship with the sun.  The planet Mercury has no tilt and therefore no seasons.  If you lived on Mercury, SPF would be your least problem.  The daytime temperature is approximately 800 degrees Fahrenheit.  Hot enough to melt your nail polish.  Hot enough to even…well, you wouldn’t have an arm to apply anything on.  It’s very difficult to rub SPF on a gelatinous mass of bubbling protoplasm.  But in the few seconds you perhaps survived, you’d need an SPF of 2,500.  I haven’t seen anything like that at Walgreens lately.  And, forget about a beach book.  The temperature is twice that of the burning point of paper.  You’d need a Kindle for sure.]

And, there’s the catch.  Just when you’ve reached the peak (the Summer Solstice) you have to begin thinking about going down.

After June 21, the days begin to get shorter.

You may say that after reading this that I’m a glass-is-half-empty kind of guy.  Nothing could be further from the truth.  I’m the eternal optimist.  After all, in a mere six months, the days will start to get longer!

And then you have the Holidays to look forward to.