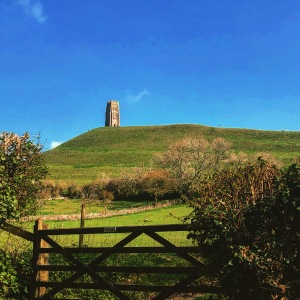 [The Tor at the start of our climb. St. Michael’s Tower crowns the hill]

Glastonbury is an ancient town nestled on a broad plain near the Mendip Hills in the county of Somerset.  It comes with a reputation, like that guy that sat in the last seat of your school bus.  You can shop for anything in Glastonbury, but you probably won’t find it.  What you can find is esoteric bookstores, more than one crystal shop and places where you can purchase a Druid-style cape (purple).

I love the town.

On my first visit, back in 1984, when I was an exchange teacher in Dorset, I found myself wandering the High Street.  After climbing the stairs to the second floor of an antique shop, I saw something I really wanted.  It was the part of the jaw bone of St. Basil.  There was even a Bishop’s seal on the glass box indicating its authenticity.  Best of all, it was reasonably priced at £50.  I didn’t buy it and I regret that to this day.

Now, I’m here with Mariam on our second visit.  We dined at the George & Pilgrim Hotel which dates back to about 1452.  It has three ghosts (according to some).  I never saw anything except a fantastic Steak and Ale Pie.

[The well-worn floor of the George & Pilgrim Hotel]

But our real goal that day was to climb the famous Tor.

The Tor has a ton of lore and myth that connects it with the figure of King Arthur.  Did the man ever exist?  Some say yes and some claim he was a combination of several of war-lords in the Saxon days.

Whatever.  I love mythology and I love the Arthurian legends.  And, it was the Tor that made it all so real and believable.  According to legend, Glastonbury was the mythical Avalon.  This is where Arthur was taken after he was wounded in his final battle against his own son.  He is said to be buried, alongside his wife (?) Guinevere.  He is awaiting the call to bring his army, once again, to save Britain.

[Parliament is voting as I write this on the Brexit…is Arthur stirring in his grave?).

I stood in the doorway of St. Michael’s Tower and looked out over the countryside.  I thought of the history that is so ancient, it’s sobering.  For more than 1,000 years people who climbed the Tor, worked the fields, herded the sheep, drank the ale, sipped wine, smoked old pipes with old tobacco, kissed in the churchyard, held firm to a quartz crystal, loved someone, lost someone and eventually died were all within my field of vision.

If you are a cynic, that’s okay.  But, if you read history, study myths and let your mind travel, you won’t be the same after a visit to Glastonbury.

[Me. Thinking about ancient times and myths]

[All photos are mine]