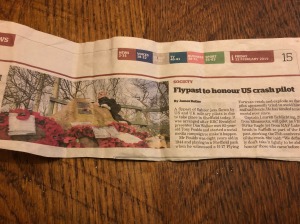 [Photo of a page of the Guardian newspaper]

I like fly overs.  The jets roar over a stadium during halftime…or more interestingly, the  Italian Air Force planes that swept over the church in Italy the moment when Pavarotti’s coffin was brought out of the church.  But deep down in my conscience, I see fly overs as a glorification of the military and by extension, a glorification of war.

So while they’re sometimes thrilling…they often send a message that I do not agree with.

Then I ran across a short article in a British newspaper yesterday.  After reading it, I felt quite moved…very moved.

The old fellow you see in the photo is eighty-two.  His name is Tony Foulds.  In 1944, he was eight years old.  He and his mates were playing in a park.  A B-17 Flying Fortress was having problems.  They needed a place to crash-land.  The pilot, an American along with nine other Yanks aboard, intended to land in the field.  The pilot spotted the children running around the field.  He purposely avoided the playing area and ended up crashing into the trees nearby. All ten Americans on the plane were killed.

Tony watched in horror.  And this horror is still with him today.  Years after the tragedy, the county council erected a memorial stone.

Every year since then, Tony has tended the memorial…planting flowers…and remembering.

A few days ago, a combined UK and US teams of pilots did a fly over.

Tony will be there.  Tony will probably cry.  Tony somehow feels responsible for the ten deaths.

He was just playing a game with his mates.