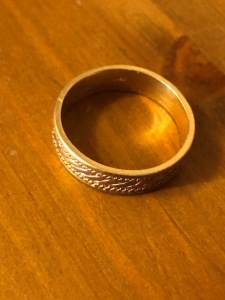 My left hand is ringless. The wedding band lies on a tray on the dresser in our bedroom, along with assorted jewelry.  Is this the sign of a marriage gone south?  Hardly.  The only thing that would be going south right now is my wife and I.  Because outside the wind howls and the temperature is dropping like the broken seeds of the sunflower mixture in our bird feeder.  Mariam reports from the kitchen that it is currently 14.2℉.  By 2:00 am, when I make my first trip to the bathroom (it’s a prostate thing), it’ll be -6℉.  It’ll bottom out at -12℉ in the wee hours.

So, what’s the deal with the ring?  In truth, I’m losing weight and a few weeks ago I tested the ring by lightly shaking my hand on the bed cover.  It slipped off.  I had a little clamp thing on it to keep is snug and safe on my ring finger but it broke.  For now it will rest, in security, on our dresser.

I have rarely taken it off in our 25+ years of marriage.  Why should I?  If I were out to ‘get lucky’ at the local pub…and I slid it off my finger, it would leave a white, unweathered ‘ring’ on the finger in question.  That would a dead give away for any twenty-something who had mistaken me for George Clooney (refer to my Facebook profile photo).

And I would never do such a thing anyway.  I can barely comprehend life without her.  She gets frustrated on her computer, but she’ll sit in my office for hours and we will read aloud the drafts of a novel I would be working on.  (A novel that will sell approximately 43 copies.)  Mariam will drop anything to help me with something that is beyond my ability.  She saved my life by locating the best hematologist in New York City, in 2003 when I was diagnosed with a rare leukemia.  She slept on a cot while I went through ten days of chemo.  She stayed on the phone (while she was working at Mount Sinai) for hours until we secured tickets to see the Rolling Stones.  She never denies my need to see Bob Dylan whenever he plays near us.  She lets me roam at will in a Barnes & Nobel…and even tells me which credit card to use. 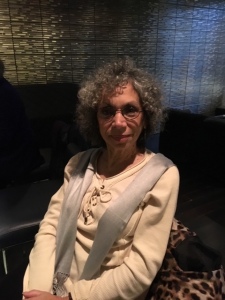 Twenty-two years ago, when I turned fifty, she asked me what I wanted.  I humbly suggested a 28″ sailboat or a 1952 MG TD (with wire wheels).  That’s when I think she started secretly stashing away money for one or the other.

We’ve traveled a great deal, especially since she finally retired after over fifty years in health care.  We’ve been to Paris, London, Belgium, Alaska, Istanbul, Ireland, Germany and countless other places.  And, we’re about to spend the winter in England and returning home aboard the Queen Mary 2., for the second time.

She is my wife and my best (and sometimes I feel my only) friend.

So, why this post?  Why now?  It’s not her birthday nor our anniversary.  It’s not Mother’s Day.  It’s just another day I wake next to my wife and feel that I could write a simple blog to brighten her day.  In the middle of a snowy and cold winter, she needs a lift.

After she reads this (which she will proof) I’m counting on her being a tiny bit happier.  So, now is the time to quietly mention the sailboat and the MG.