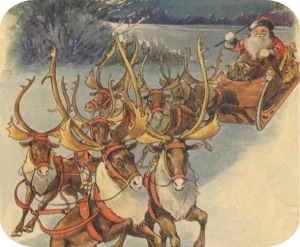 [A US Army drone photo of the CEO of S.Clause,LLC in action.

A traditional world-wide gift distribution (known legally as S. Clause LLC) is in danger of being shut down on the evening of December 24 after President Trump declared it would hurt major American private business, notably Amazon, Google and even the government-run USPS.

“This tariff, it’s a good tariff, will help American workers, good people, I know a few, fine people, will have more money in their pockets to do their shopping at Sears and Wanamakers, fine American-run companies.”

When a reporter informed the President that both Sears and Wanamaker are either already closed or slated to shut down in the near future, the President shrugged and said that the Chinese, Japan and Argentina were responsible.

He made further remarks: “These goods entering the American market from a crappy third-world country that is no bigger that a large factory and an attached cottage. This gives them an unfair advantage. They don’t even pay taxes.”

Another reporter from the New York Times stood and asked about the President’s own taxes. He was ushered out of the briefing room by Sarah Saunders.

The President continued: “And what are these goods that are being delivered for free to the children? Toys. Not good. Kids don’t need those evil objects. When I was a boy, I was happy to play with a cardboard box, sometimes for hours. Good thing. Wonderful memories. With this tariff, I will make American cardboard boxes great again. Good thing.”

Secretary of Education, Betsy Devos stepped up to the bank of microphones. “There have been no studies that show toys make children any happier or more educated then, say, cardboard boxes.”