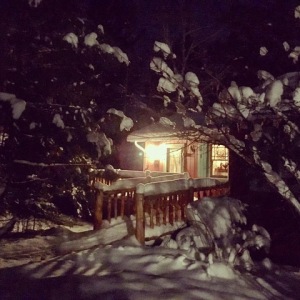 I’ve never lived inside a greeting card before. You’d have to be really really thin, like Wiley C. Cayote after being flattened by a road paver. Never fear. My readers know that and that the title of this post is metaphorical. Having said that, I will admit that I could drop a few pounds.

So, consider the lead photograph at the top of your screen. Doesn’t our house look like a Disney version of Santa’s Workshop? It looks so cozy inside and it is. Outside, it looks like a winter wonderland…snowy and frozen.

Many of my friends from back in the day will read this blog in Florida and say: “Beautiful, but no thanks.” Others may look at the picture and say: “How cozy. How peaceful.” 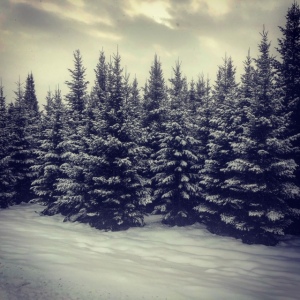 I used to love winter when I was growing up in Owego, NY. We had a toboggan, sleds, skates and shovels to pile the snow and make a ‘snow fort’. My views have changed since 1958. Consider this:

I have to get from the front door to the car in the driveway which means I have to shovel a path, clean the snow off the car and hope the battery isn’t dead. Then I look and see that the county plow has piled the road snow at the head of the driveway. We have a guy (last name is Winter by the way) who plows our driveway but to do so properly, the car needs to be moved. Can you see a problem in this situation? I can.

Now, for reasons I won’t get into here, we have two cars. My car is in the garage. Protected. But how do I get to said garage? I have to shovel a path from our porch to the back door. I need this path because every two weeks the recycling and garbage has to be brought to the large plastic buckets in the garage. Once these are filled, I have to shovel a short path so I can haul the bins to the roadside. Mr. Winter may have had a chance to clear that space from the garage door to the road. Sometimes he doesn’t have that chance…so I have to shovel.

The other day I brought up the idea of getting a snow-blower. They cost about $700 for a proper one that ‘drives itself’. I told my wife that we’d save on Mr. Winter’s plowing. We’d have the thing paid off in two to three winters. She said we’d still have to keep him on our payroll because when we’re away for the winter, the driveway needs to be plowed. It’s an insurance thing.

“Then I’ll shovel,” she replied.

“Not with your dicey shoulder,” I retorted.

We’re at the classic snow-blower stalemate.

[A beautiful landscape. Photo is mine.]

So, what is the situation now? Well, I need one of those patches for my lower back after I shovel even a few yards. I possess five buckets of ice-melting stuff on hand as well as three cans of de-icer, three shovels, a child’s plastic sled to haul our groceries from wherever I can park the car to the front door.

You can see the front door in the top photograph. The one that looks so cozy and inviting. But there’s not many people on our road to invite to our cozy home. They’ve all gone south for the winter. Like the hummingbirds, geese and other seventy-something-year-old folks.

We will be spending the majority of this winter in England. We have a great place to stay at the home of long-time friends. But, last year they had a freak cold snap and several inches of snow fell in North Dorset.

I wonder if I can use an English shovel. They drive on the left…maybe there’s a shoveling etiquette?

If you get a holiday card from your son or ex-wife who now live in Tucson, savor the photo of the lovely, dry, snowless desert.

2 comments on “Like Living in a Holiday Greeting Card”