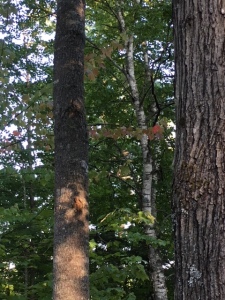 Omen n. Something believed to be a sign of good or evil.

Can you see it? Between the two large trees…behind the birch. I can see it. I first noticed it a few days ago but held-off saying anything about it.

It’s not a cardinal or an oriole.  It’s a leaf. And it’s turning red. So are the few other leaves on the same branch.

I know about omens. For example, I don’t need a crystal ball or magic stick to know that my next flight on American Airlines is going to be painful. Painful because I have two legs and American must assume you won’t need them during your flight. Other than that, I’m Irish and the Irish know omens.

But the leaf omen is telling me something special. It’s a warning from the Weather Gods of the North Country. Leaves, you see, are not supposed to turn color until it’s autumn. That’s the rule I grew up observing when I lived downstate New York.

But its August. August 22 to be exact. Legally, its still Summer. Fall colors are not to be a part of ones life until late September or October. Trick or Treat time, when you walk down the street and kick leaves dressed as a vampire.

So, what does all this mean? It means that WINTER is around the proverbial corner. I mowed the lawn once this summer. I haven’t blown the leaves and pine needles off the roof yet. And, yet, these leaves are telling me something:

“Winter is on the way. Get your snow shovel out and keep it handy.”

(Yes, I listen to the leaves. Is there a problem with that?)

I just put the shovel away in the garage. What am I supposed to do? Things are happening too fast for me. I’m retired. I should be slowing down.

But no. Winter in the North Country is just weeks away. It’s almost September. I predict that before the end of October, I’ll need to bring out the shovel again.

Don’t get me wrong. I love the fall colors…all eleven days of them.