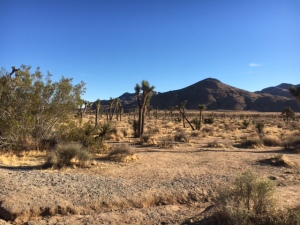 [Desert view outside Joshua Tree. Photo is mine.]

This is where it all began, right?  I don’t mean California…I mean the desert.

The Nativity story is set in the desert; much like the one I see from my bedroom window.  Very much like it, except that desert, with the Star, is half a world away.

Two years ago, we celebrated this season in Fort Myers, Florida.  There, the temperatures were in the low 90’s.  I remember wearing shorts and sitting outside my favorite Java cafe, sipping an iced coffee.  I had to position myself at an outdoor table so I could catch the AC’d air rolling out of the brand name outlets.  The palm trees were wrapped in holiday lights, Bing Crosby was singing on the PA system, shoppers were hurrying into Bass, or Tommy…but the feel of the season wasn’t inside me.  Red and green lights and Bing didn’t fulfill the images on Christmas cards.

Now, this year, we are enjoying the high desert of Joshua Tree, 29 Palms, Yucca Valley and the Mojave Desert.  And, it’s chilly if not downright cold.  Yet I know there’ll be no white Christmas here this year.

It’s hard to imagine experiencing the Yule without even the probability of several inches of white powder.  That’s because I was raised in Upstate New York, where snow was mostly guaranteed.  I built snow-people, skated with my childhood friends and tobogganed the longest slopes I could find.  I studied the crystals of the flakes when I caught one on my mitten.  I believe it’s true that no two snowflakes are alike.

But deserts are alike in many ways.  Strange and exotic plants, sand, crying coyotes and the limitless sky…filled with stars and a crescent moon.

Ironically, though, it’s here, in the California desert, that I can feel the true sense of the Nativity story.  When you’re raised with religious images of Joseph and Mary traveling across the desert, it’s hard to meld that into a backyard in New York, twelve inches of snow and a snow person.  I’ve never traveled to the deserts of the Middle East so I can’t speak to the winters there, but I can’t believe that the winter in the Holy Land is much different than it is here. 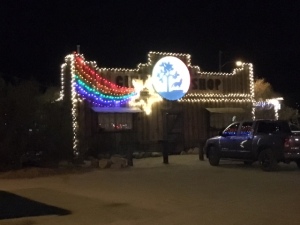 [Souvenir shop. Photo is mine.]

[Storefront lights in Joshua Tree.  Photo is mine.]

But, maybe they do.

I can imagine the solitude, the expansive star-filled sky…and the silent peace that fills those scenes we were raised with, in the pages of the Bible.

About an hour from where I write this, a raging fires is destroying hundreds of thousands of acres near Santa Barbara.  Peoples lives will be ruined.  No holiday cheer for them.

No fires will come to the desert.  There’s nothing much to burn.  It’s vacant and austere backed up by isolation and loneliness.  That’s the way deserts are.  Places to get lost and places to stand and contemplate the ways of the world and to confront the Great Empty.  That’s when you find that the Empty is not only a physical description of a desert…but also of your own mind.  The Desert Fathers of the Old Testament sought these places out.  The three great religions of the West were founded in the sands.

How different the high desert is.  There is, outside my window, all of the above (along with our rented Toyota), but there is something missing.  Beyond our sandy yard, beyond the Welcome to Joshua Tree sign, beyond the glow of Palm Springs and Los Angeles…something is dreadfully missing.

The peace.  Where is the peace and love that the whole Nativity narrative implies?

It’s just not there.

[Note to my readers: The next post is very special to me.  Please take time to read and comment on it.]

One comment on “Joshua Tree Diary: Christmas in the Desert”