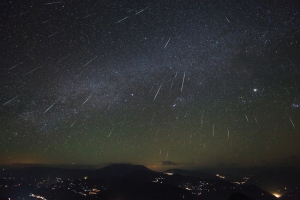 [The title is taken from a song by Bob Dylan, of course.]

Actually, I saw five ‘shooting stars’…and it was last night, not tonight. But I still thought of you.  Or, by the time I post this it will be two nights ago.  The date we had in the desert that night (December 13, 2017) was to drive into the dark areas, beyond the houses, beyond the lights and view the Geminids Meteor shower.  I took this particular event personally since I’m a Gemini.  I don’t necessary believe in astrology, but I did have two minds about leaving our cozy house and driving twelve miles into the National Park.

Night vision takes about ten minutes for me to kick in.  That’s because I eat a lot of carrots.  At least that’s what my mother always said.

But so many cars passed out the pull-over area that I had to close my eyes and turn my head away…like I was some kind of desert cattle rustler.

We’re nearing our half-way time here in Joshua Tree.  We will be on the road on January 1…to somewhere.  There has been a pall cast on the last phase of our vacation.  Our original plan was to take some back roads through Pioneertown and Victorville and then spend a week hiking in the hills around Santa Barbara.  But the recent fires in that area have given me some concern.  Today, I read that they are handing out face masks in that area.  I’m not concerned about the actual fires.  I think they will be contained by the first of the year, but it’s what we can expect that worries me.

I’ve been hindered (and Mariam, also) by bronchial problems.  The humidity up here in the high desert is around 10%.  That’s nose bleed time for me.  And, I just can’t lose the cough I’ve had since we were in Orting, WA for Thanksgiving.

No, I think the flames will be contained by early January, but we intended to hike the hills north of Santa Barbara.  I don’t know about you, but I don’t want to hike through six inches of ash while wearing a filter over my nose.  I’m fearful that it will remind me of my Catholic education…”ashes to ashes, dust to dust”.

We turned on the news from the LA area.  We saw images of people wandering through the remains of their homes that were destroyed by the “Thomas Fire”.  My hiking and their loss became a very real thing to me.  Who was I to feel distraught about my vacation when so many acres are burned, people’s homes are lost…and lives are ended…in so many ways.  I was being selfish in thinking how the fires would inconvenient  me.

We began to look at some alternatives (read: I don’t want to go home yet) because the Adirondacks are in a cold spell.  That’s what we’re trying to avoid.

So, we’re thinking of changing our plans and spending our last week in Palm Springs, or a nearby location.

That would be great if I golfed.  It would be paradise.

We were in Palm Springs two years ago.  There are some great movie palaces there.  Maybe we can catch up on some Oscar nominated movies…maybe the new Star Wars?

Maybe a movie that has some comets, meteorites, and shooting stars.

No wonder everybody on the planet comes to, or ends up in Los Angeles, or somewhere here in southern California.

I hear it’s snowing at home in Rainbow Lake, NY. 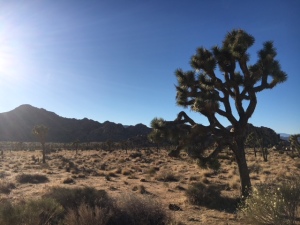 One comment on “Joshua Tree Diary: I Saw A Shooting Star Tonight And I Thought of You”