bat n : any of an order of night-flying mammals with forelimbs modified to form wings.

I considered naming this post “Listen to them…they are the children of the night. What beautiful music they make” but I decided: a) it was too long for a title, and, b) the possibility of a copyright violation because it was the classic line spoken by Bela Lugosi in the 1931 film Dracula (Universal Studios retain some killer lawyers, I hear).

But, actually my chosen title speaks more to the point of the story (all true, I assure you) as I am about to relate.  Less than 24 hours ago (as I write this), my friend and seasonal neighbor (his real home is in Ohio), D’Arcy Havill, had an hour-long, somewhat contentious, battle with a real bat that entered his house in the dark hours, after sunset and during a rainstorm.

In a sense, it all began as my wife, Mariam and I were finishing dinner at the Belvedere Restaurant in Saranac Lake.  The dinner (I had Salmon) was to celebrate D’Arcy’s wife’s birthday.  Her name is Judy.  You’ve read about this couple in past blogs.

It was a warm muggy afternoon and there were scattered evening thunderstorms.  We drove home in a light sprinkle of rain.  I pulled our car up to their garage and parked.  Judy and D’Arcy opened the garage door and went into their house.  Mariam and I followed…but we took the walkway to the front door.  We were there to end the evening with a bit of chocolate cake and ice cream.  No sooner was I inside and heard the screen door slam shut behind me, I heard D’Arcy say the dreaded words: “Who let the bat in?”  I thought he said “Who let the cat in?” and I became confused because I could see their two cats, Delilah and Sylvester standing in the hallway.  The cats suddenly began to act as though they were walking on a bed of hot coals…they hopped about and were looking up.  There it was.  A bat had come in behind us and was making circular flights around the ceiling fan.  The cats were immediately banished to the master bedroom…and for good reason.  When cats and bats tangle, things can get rough and ugly.

Being from the mid-west, D’Arcy probably had an edge over Mariam and me when it comes to bats.  The Adirondack bat population has plummeted in recent years because of something called “white nose disease” (don’t ask).  Consequently, the mosquito population has spiked (keeping me indoors until the first frost…probably in late September).  So he (D’Arcy) issued the first command: “Open the doors!”

Meanwhile, as the bat kept circling the ceiling fan, Mariam took my iPhone into the kitchen and found “bat calls”.  I had no idea there was an app for that sort of thing.  I thought at first that she had found a really awful jazz station on the radio, but they were indeed, bat calls.

I thought for a few minutes and realized she may have been playing an aggressive angry call instead of a mating call (that would have attracted the bat, one would think), so I suggested that she not play the calls.  Next thing I hear is some conversation that was recorded by a family who were facing the same situation…a bat in the house.  Their problem ended when the mother shooed the bat out of an open door with a broom.

The radio did suggest that the lights should be turned off.  The bat would become disoriented by a lot of light since they used echolocation and are known to have poor eyesight (you know…”blind as a bat”).

So the adults retreated to the screened-in porch to ponder the situation.  Here we were, four adults, all past retirement age, with three and a half Master’s degrees between us.  I was a science teacher but I never taught a lesson on bats.  What were we going to do?  Mariam and I just couldn’t say “good night” and leave the Havills with a rogue bat flying around their white vaulted ceiling.

Someone suggested using a butterfly net.  The only problem was that none of us caught or collected butterflies.  But, no authentic Adirondack camp is without an antique fishing net…the hand held kind.  D’Arcy had two.

We went back into the living room and found that the bat had landed on the wall, about fifteen feet above our heads.  We went back to the porch.  The fishing net thing gave me an idea.

“Just a thought, but why don’t we attach one of your nets to a pole and capture the bat while it is resting on the wall?” I said.

D’Arcy went to work like a true mid-westerner.  He grabbed his wooden hiking stick, disappeared into the garage and soon we were duct-taping the handle of the fishing net to the stick.

Back to the living room.  We turned on a single light and we soon had the bat trapped by the net (after a long reach). But as he was dragging the net down, the bat crawled out from the gap where the net handle and walking stick were joined.  Off it went to make more orbits of the ceiling fan.

Back to the porch.  Mariam suggested that if he turned the net inside out, there would be no gap.

“Then we would slide the bat down the wall and slide a piece of cardboard against the wall and the net, thereby trapping the bat.

We waited until the little mammal needed a rest and sure enough, it went to almost the same place it had been a few minutes earlier…only a few more feet higher.  D’Arcy made the supreme reach and covered the bat.  He dragged it slowly down, this time leaving the creature no gap to escape.  I slid the cardboard against the wall and before you could say “strike two”, we had it outside.  But then the problem of getting it out of the net presented itself.  It was hopelessly tangled.

“Scissors!” he yelled.  He was like a surgeon and Judy promptly brought a huge pair from the kitchen drawer.

We snipped and cut and gently, string by string, finally freed the bat, who promptly flew off toward our house…hopefully to gorge itself on all the mosquitoes that had been eyeing me for the last few days.

We let the cats out of the bedroom (where they had clawed the edges of the carpet trying to escape).

Mariam and I went home and watched two hours of a tense murder mystery series on PBS.

It’s been said that the last few Batman movies have become darker, more brooding.  I can totally get it.

And, even though we all lost a precious hour, I still believe, “Every little bat is sacred”. 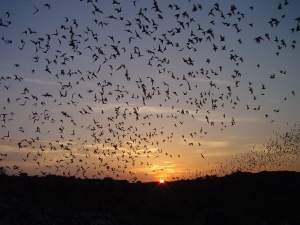 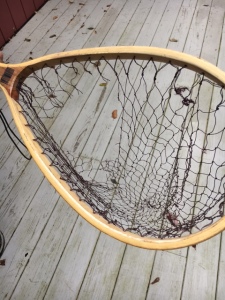 D’Arcy’s net the morning after. [My photo]