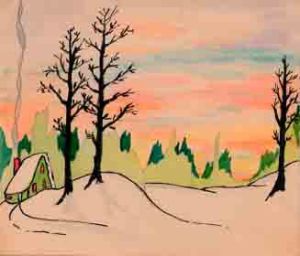 Note to my readers: If you think you’ve read this blog before, don’t thing you’re getting senile…(the doctors won’t release such information)..this is perhaps the third, maybe fourth time I’ve posted it.  Hey, maybe I’m the one getting senile.  I’ve tweaked the story several times to try to make the narrative better, clearer and more truthful.  This is not a made up story by me.  It really happened.

It’s another year and another chance for me to share this holiday memory…Happy Holidays to you all!

I am a grandfather now, feeling every ache and sadness of my seventieth  year. The stories that my father told me about his father has taken on new meanings. I’m the old one now. I am the carrier of the family history. When a recollection of a family event comes to mind, be it a birthday party, a funeral, a wedding or a birth, I get my journal and I write with haste, in case I might forget something or get a name wrong or a date incorrect. Or, forget the event entirely.

This is especially true when the snow falls and the Christmas tree decorations are brought down from wherever they live during the summer. There is a certain melancholy mood that comes with the wintertime holidays. The sentiment of A Christmas Carol comes to mind. It is a time to listen to the winter wind blow, put a log on the fire, pour a little more wine and to recall and celebrate the memory of those who have passed on.

It’s time for a Christmas story. It’s time to think again about my family and how they lived their lives so many decades ago.

I was raised in the post-war years. My parents were not saying anything original when they would tell me, or my brothers, that we had to be good…very good…or Santa would not leave us a brightly wrapped present, red-ribboned and as big a box as a little boy could hold.  No, Santa would not leave such a wondrous thing. But he wasn’t so vengeful to leave nothing in our stocking. No, he would leave a lump of coal…if you deserved nothing more.

My father grew up poor.  Not the kind of poor where he would walk barefoot through ten inches of snow to attend school or go from house to house asking for bread.  It was just the kind of poor that would keep his father only one step ahead of the rent collector. Dad would often make a joke about poor he was as a child.

“I was so poor that I would get roller skates for Christmas but I would have to wait until the next year to get the key,” he would say with a sly smile. It was a joke of course…wasn’t it?

His parents provided the best they could, but, by his own admission, he was raised in the poverty that was common in rural America in the 1920’s.  My grandfather and my grandmother should be telling this story.  Instead, it came to me from my own dad and it was usually told to his four sons around the time it came to bundle up and go out, find and cut a Christmas tree. I heard this story more than once when it was cold and snowy in the 1950’s. It comes from the years when my father was a child, when the winters were probably much colder and the snow so much deeper.  And, the overcoats were thinner and the socks had holes and the footwear was not insulated.

It was northeastern Pennsylvania. It was coal country and my grandfather was Irish.  Two generations went down into the mines. Down they would go, every day before dawn, only to resurface again long after the sun had set.  On his only day off, Sunday, he would sleep the sleep of bones that were weary beyond words.

Because of some misguided decision on his part, my grandfather was demoted from mine foreman to a more obscure job somewhere else at the pit.  Later in life, he fell on even harder times and became depressed about his inability to keep his family, two boys and two girls, comfortable and warm.  It all came crashing down, literally, when their simple farmhouse burned to the foundation.  After seeing his family safely out, the only item my grandfather could salvage was a Hoover.  My father could describe in minute detail how he stood next to his dad and watched him physically shrink, slump and then become quiet.  He rarely broke the silence after that and died in a hospital while staring mutely at a wall.

But all this happened years after that special Christmas Eve that took place in my father’s boyhood.

It was in the early 1920’s.  The four children were asleep in a remote farmhouse my grandparents rented.  Sometime after mid-night, my father woke up to a silence that was unusual and worrisome.  It was too quiet.  There were no thoughts of Santa Claus in my father’s mind that night–the reality of their lives erased those kinds of dreams from his childhood hopes. There was no fireplace for Santa to slide down.

He pulled on a heavy shirt and slipped out of bed.  The floor felt unusually cold against his socks.  He crept down the stairs to the kitchen where he knew his parents would be sitting up, talking and keeping warm beside the coal stove.   But the room was empty and the coal fire was burning low.  The only light was from a single electric bulb, hanging from the ceiling on a thin chain.  My father noticed the steam of his breath each time he exhaled.  He called out.

He heard nothing.  He pushed his cold feet into cold shoes that were six sizes too large.  Shuffling over to the door, he cracked it open to a numbing flow of frigid outside air.  In the snow there were two sets of footprints leading down the steps and then behind the house.  He draped a heavier coat over his shoulders and began to follow the prints.  A pale moon helped light the way. The tracks led across a small pasture and through a gate.  From there the trail went up a low hill and faded from his sight.  He followed the trail.  Looking down at the footprints he noticed that they were slowly being covered by the wind driving the snow into the impressions.  A child’s fear swept over him.  Were the young kids being abandoned?  It was not an uncommon occurrence in the pre-Depression years of rural America.

In his young and innocent mind, he prayed that the hard times hadn’t become that hard. But deep within, he knew of his parents’ unconditional love and concern. He knew he and his brother and sisters were cherished and loved.

He caught his fears before they had a chance to surface. His parents were on a midnight walk, that’s all.

At the top of the hill, he saw a faint light from a lantern coming from a hole near the side of the next slope.  He slowed his pace and went to the edge of the pit not knowing what he would see. He looked down.

He knew this pit from summertime games, but it was a place to be avoided in the winter. The walls were steep and it would be easy to slip in the snow and fall the dozen or so feet to an icy bottom. The children never went into that field after the hay was cut and the autumn leaves had fallen and the snow began to drift.

He dropped to his knees and peered over the edge.

At the bottom of the small hole were his parents, picking fist-sized lumps of coal from a seam that was exposed on the hillside.  They had nearly filled a bucket with the chunks of black rock.  They looked up, quite surprised, and saw my father standing a few feet above them.  They looked back at each other with a sadness that was heart-breaking.  They certainly didn’t want to be caught doing this in front of one of the kids, not on Christmas Eve.  They stared at each other and then up at my dad.

“Boy,” my grandfather said, “The kitchen stove is empty.  Come on down and help us get a few more lumps, will ya?”

My father was helped down and after only a few minutes his hands were black from the coal.  Two buckets were filled.  They helped each other out of the pit and walked back to the house together. My father and his father carried the buckets between them.

In a very short time the coal stove was warming up again.  My father sat up with his parents until they finished their coffee and the house was warmed a few degrees.  Dad kissed his mother and father and went upstairs to bed. He fell asleep, he always would say, with a smile on his face.

Twenty some years after the midnight trip to the coal-pit, my parents and my two older brothers moved to Owego, New York. I was born two years later, in 1947.

When I was a young boy, my father took me aside one Christmas Eve.  I had not been a very good boy that day, and I was afraid.  Neither of my parents, however, had mentioned the threat that would be used to punish a child if you were naughty and not nice.

My fear left me. Father’s voice was warm and full of understanding.

“Pat,” he said, “If anyone tells you that you will get a lump of coal in your stocking if you’re not a good boy. Tell them: ‘I hope so,’ then wish them a very Merry Christmas.” 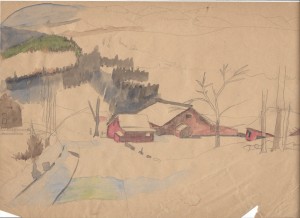