People like to put things on top of things.  Nature likes to just leave things where they were put originally.

I remember one afternoon, in mid-October, 1997, (if you need something more precise).  Mariam and I were visiting my brother, Dan, at his newish house on a hill just south of Ithaca, NY.  He asked:

“Did you hear about the pumpkin?”

“The pumpkin?  Is there a special pumpkin?”

“Yes, the one on top of the McGraw Tower Spire, on the campus of Cornell University.  Someone managed to get a hallowed out pumpkin on the very top of the spire.  No one knows how it was done, and no one has taken credit for doing it.  Right now, the main suspects are Engineering majors.  Want to see it?”

He reached for his TV remote and clicked on a community access channel set up by someone in the technology department.  It’s called a “webcam”.  The camera is fixed on the top of the spire so people can see the pumpkin.”

There it was, a pumpkin (later estimated to weigh about sixty pounds) sitting on the tip of one of the main spires on Cornell’s beautiful campus. 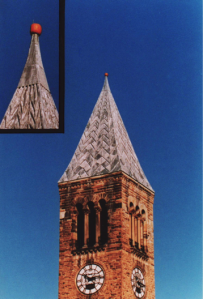 This coming October, the prank will celebrating its 19th anniversary.  It’s listed as one of the top five college pranks in history, according to a Web search.  To this day, no one has claimed to be responsible.  And, how it was done remains a mystery.

I’ll have to admit, it looked pretty cool up there, a giant orange sphere, crowning a majestic tower.  But, like I said, how it was done is still a mystery.  The slate roof is very steep, there were no sounds of helicopters.  It made the Networks and enjoyed six months of fame before it came crashing down during an attempt to remove it.

A small piece of it sits in an office of a Professor of Psychology…that is the last word I could find on it.

I remember, when I was a child playing with blocks, I tried to see how high I could stack the assorted shapes until they fell.  I think my record was about 3 1/2 feet!  Not bad for an 8-year old.

But, the pumpkin was quite a feat.  Unequalled in its originality.

A few days ago, we were driving through southern Utah.  We had spent the night in Monument Valley and we were passing through a cool little village named Mexican Hat.

A few minutes later, as we made our way to western Colorado, we passed a spectacular rock formation.  It was a “balancing rock” and it resembled a sombrero.

“So much for the strange name for that town,” I said.

I took a few photos.  I stared at it and it seemed to me like it was moments away from falling.  Would I witness such a thing?  I walked gently back to the car…I didn’t want my foot steps to move the cap rock and destroy this awesome natural rock formation.

[Further away than it looks]

It didn’t look real in a way.  How could nature alone keep that rock balanced there?  I knew the general geological idea; a more erosion resistant rock sat on a column of more easily eroded sedimentary rock.

The beauty of this rock was in its color, its location among the stratified rocks, and its delicacy.  It’s very existence was precarious.  A small earthquake and its gone forever.

I thought about the pumpkin atop the spire at Cornell.  Some very bright individuals found a way to accomplish that feat.  But, here, in the barren landscape of Utah, was something that just sat in one place for tens of thousands of years while the wind and water took away its sandstone base.  Nature does that.  It has a breathless way of creating scenery that could never be painted, piled, constructed, engineered or sculpted by the hand of a human.

Nature exists without us and resists our attempts to make it more spectacular.  We are modern beings who are mere observers.  We drive through a place or walk a path and see what the earth has done…by doing nothing, simply being.

We’re strangers here, even though we came from these very elements that make up the ground we leave our tracks on.  Our natural states have left most of us.  From what I’ve seen on my travels, there are only a handful of individuals who truly make an attempt to blend into the environment…I’ve yet to actually meet these rare individuals…but I’m sure they’re out there.  People who have taken the time and made the effort to leave the car behind and walk into places off the paved byways.

I’m convinced that the Native Americans were quite well attuned to the natural world as they saw and experienced it.  For some reason, I thought about a few lines in the Grateful Dead song, Ripple.  The words are by Robert Hunter.  The music is by Jerry Garcia:

When there is no pebble tossed

Nor wind to blow…

There is a road, no simple highway

Between the dawn and the dark of night

That path is for your steps alone…”

A pumpkin on top of a Cornell spire.  A majestic rock, balanced on a sandstone column in Utah.  A child’s stack of wooden blocks.  A Grateful Dead song about one’s journey through life and seeing ripples in a pond…ripples began by nothing.  It all comes together in a strange way.  At least I think so.

Nothing, of course, is not really the proper word.  The natural world contains more unbelievable phenomena than you could possibly see in a thousands lifetimes.