“When you’re lost in the rain, in Juarez, and it’s Easter Time too,

Let’s be realistic.  You didn’t think I was going to write a blog about crossing the border bridge to visit Juarez, Mexico, and not use this quote by Dylan?  If you did, you haven’t been doing your homework.

The problem here is that I wasn’t lost, it wasn’t raining and my negativity never pulls me through.  Ever. Not here. Not anywhere.

But, I found a moment of beauty and art and sadness and love on a dusty corner…all for a few pesos.  No, it didn’t have anything to do with a Mexican girl named Felina.  It had to do with an old man in a wheelchair and a sombrero…and a guitar.

It was surprising to me how easy it is to cross from El Paso in Juarez.  All it took was 25 cents and you were on the upward arch of the border bridge.  At the apex was the plaque that announced that you just had taken a step into a foreign country.  That’s where the poor panhandlers and sad faces began to appear.  All the way down the Mexican side of the bridge, men, women and children were selling trinkets and gum for a peso, or less.  Some young men worked the stalled cars in the endless line of traffic trying to enter the USA, by selling CD’s or fake flowers.

When we started walking along the main street, no one bothered us, no one had their hands out.  Everyone was hanging out in the store fronts and on benches.  Only about two men looked like members of a cartel, if you went along with the stereotypes.

I was looking for a certain destination.  I wanted to visit the famous Kentucky Club.  This bar, according to my internet research, was the watering hole for the likes of Richard Burton and Elizabeth Taylor, Steve McQueen and…Marilyn Monroe.  I’m sure countless others, rich famous or just tourists, had licked the salt from their hands and tilted a tequila   living the vicarious life of Marilyn or Liz.

I almost walked past the place.  Mariam had to grab my arm and say: 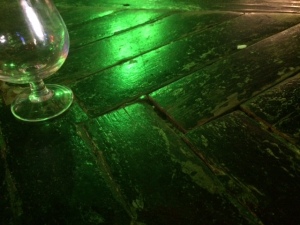 [The legendary bar of the Kentucky Club]

I sat at the bar and had a tequila.  Mariam had a dark Modelo.  We snacked on a dish of guacamole.  I tried to look as un-touristy as I could, but the more I tried, the more goofy I looked.  I had a backpack, a red Moleskin notebook sticking out of my pocket, a bright orange ball point pen from a bike shop in Fort Myers, Florida, an iPhone and a baseball hat that had the logo of a health food store in Saranac Lake, NY. (Nori’s, if you’re interested). At least I wore a short beard and had a bad haircut that, hopefully, gave me that do you really want to mess with me? kind of look.

Back out on the street, we began to walk a few more steps into this fabled city, this dark country that produces guys like El Chapo, Pancho Villa, Richardo Montalban and Emiliano Zapata.  I thought I had walked several blocks, but we only had gone to the nearest street corner.  There was a man in a wheel chair with his back to us.  He was playing the guitar and singing, but the traffic noise prevented me from hearing him…but I knew I wanted to stop and listen.

I walked past him, turned and leaned against the light pole.  Next to his left ankle was a red plastic gallon-size Folger Coffee container with the top cut away.  A few people dropped a coin or two into the bucket.

He finished a song.  I went up and dropped $2.00 into his tip container.  He reached out and touched my arm and said something in Spanish.  Mariam knows some of the language and she said he was telling us that he had another pretty song for us.

We went back to the lamp-post.  He began singing Cietlito lindo. I didn’t recognize the first few lines…then after a pause…”Ay, Ay, Ay, Ay…”.  It was a song I heard a thousand years ago as a child.  I heard it a thousand times, yet I never knew what it was about.  When we got back to the rPod, I googled the song.

The title translates, according to one source, as Lovely Sky.  I read the English lyrics several times.  It wasn’t the sky above our heads that is the subject of the song…it’s a woman.  Her name is Lovely Sky.

From the Sierra Morena

A pair of dark eyes…Lovely Sky

Because singing, they brighten up

An arrow in the air,

Lovely Sky, Cupid has launched it.

An arrow in the air

Lovely Sky, that has struck me.

I watched his gnarled fingers fret the strings.  I looked at his immobile feet in the wheel chair.  I saw the gap from a missing tooth.

I watched as he sang…his eyes were closed…he was singing to me, to Mariam, to everyone, to no one, to himself, to a woman, to a love remembered. 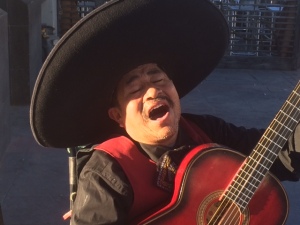 I wondered what kind of life he had.  What did he go home to?  Was it a house of grandchildren…or empty rooms and a bottle of beer?

Me?  We began our walk back to El Paso.  Another quarter in the slot.  No one checking our bags in Mexico…but when we came down the bridge and entered the Port of Entry building, the security was as bad as the TSA at JFK airport.  We pulled out our passports.  I was quizzed briefly. I felt like joking with the Border Patrol guy.

“Bringing anything back?” he asked.

“Nothing penicillin can’t fix,” I was thinking about answering.  He didn’t look like the joking type, so I let it drop

I was waved through.  Mariam had to have her bag searched.

Our packs went through an X-ray machine.  We emerged about seven blocks from where our car was parked.

I would never be able to convince myself that I had seen anything of Mexico.  It would be fifteen miles of malls and outlets, Taco Bells and muffler shops along I-10 East to our RV site.

I felt cheated.  I had denied myself any other experiences in that fascinating city.  I walked fourteen minutes into this amazing country and sat in a tourist bar.  What kind of soul-searching wanderer am I?

But, for a brief moment, on a dusty street corner, I could close my eyes (along with the singer) and imagine I was sitting in a cantina in La Boquilla del Ranchos on the eastern slopes of the Sierra Madre Occidental.

Yes, I would sit in the cantina and wait for Lovely Sky.

One comment on “On A Dusty Street Corner In Juarez”