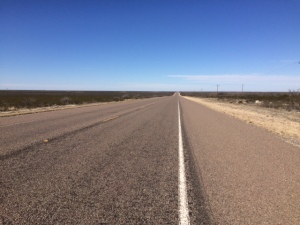 You shall cross the barren desert, but you shall not die of thirst.

You shall wander far in safety, though you do not know the way.

–From Be Not Alone, a hymn commonly sung at funerals.  Words by John Michael Talbot.

Deserts have always intrigued me for their power, lines of sight, clearly defined horizons and the emptiness.  Sometimes they’re referred to as The Fearful Void or the Empty Quarter.  It’s no coincidence that the three major religions of Western Civilizations all had their roots in the sands of the Middle East.  Sand is not known for its quality of holding vegetation, but these gods of Islam, Judaism and Christianity all have very deep roots. 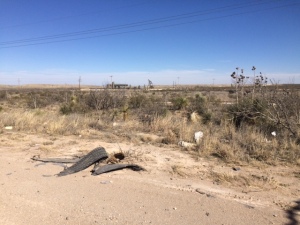 This was the ideal environment for the “Desert Fathers” to retreat and contemplate the meaning of life and death.  It is a place where a man can hear God’s speaking from a burning bush, or be forced to listen to one’s own inner voice…and confront the truth about his or her own soul.

The desert attracts mystics, loners, drifters, outlaws, survivors, fanatics, preachers and cheaters.  In these modern days of RV travel, it attracts the casual tourist.  Once it attracted those who had nowhere else to go.  It was the last stop for the pitiful souls that lived their lives on the edges of society.

It’s kind of a rule, I guess: Outlaw mystic bigamist simply don’t have time to shovel snow or put salt on the ice of their driveway.

There are towns in Texas with names like Bug Tussle, Ding Dong, Muleshoe, Spunky Flat, Mudville and Wink.  None of these would we pass through, however.  We’d have to settle for Austin, where I learned to do the 2-step.  San Antonio, where I finally walked through the door of the Alamo.  We stayed at Junction.  Drove through Sonora to Ozona where we parked in a nearly empty lot that was ringed by pre-fab houses.  No office.  No showers.  Just a few rusted Maytags and a few new dryers.  It was there that the owner/manager came to pick up our check that we had dropped into a black lock box.  Her husband sat in a pick-up truck while we chatted about life in these parts.

“Don’t stay over in Pecos,” she warned.

We settled for Fort Stockton instead of Pecos.  I confess I was disappointed.  The pure romance of the name, Pecos, was enough to tweek my interest.  At the Old Fort Stockton Cemetery, I stood amid forty or fifty graves, marked only with iron crosses painted white.

There were only a few names.

Our RV park in Fort Stockton was on a rise on the west end of town.  I had a fantastic view of the four lanes of I-10, paved straight as a ruler to the west, the point of convergence seemed to be beyond the horizon…at the very ends of the earth.  White lights came from the cars heading east, the red tail-lights were the cars and trucks heading into the unknown regions beyond El Paso.

Where were they going?  Who was in those cars?  Were they heading toward a dream and away from a nightmare (or the law), or was it the other way around?

I wonder about these things.

As we drove north from Fort Stockton, we passed through Pecos.  We crossed the Pecos River…the stuff of cowboy movies and pulp westerns.  It wasn’t as bad a place as the woman who held our $35.00 check in her hand…in a laundry shed in Ozona had said.  It was in Pecos that I gave up counting the number of a certain store, for I have found a place more ubiquitous than McDonald’s or Wal-Mart.

I found the most common retail store in North America…and it’s the Dollar Store or the Family Dollar.

We drove north on Highway 285, crossing empty stream beds named Cayanosa Draw, the Salt Draw and others that I forgot.

It was not a hot day, but the strong winds tore the car door from my grip.  I stopped to take a photo of an abandoned liquor store that probably sold its last bottle of cheap Tequila in 1963.  A semi sped past me at 80 mph, kicking up a cloud of dust that penetrated my tightly closed eyelids.

Once more, I stopped counting the working oil pumps.  The levers rising and falling like a children’s teeter-totter.  I thought all the oil in Texas was gone decades ago.  I was wrong.  A minor boom was driving the economy of half the state.  Dozens, perhaps hundreds of such pumps stretched off into the distance.  Several wells were burning off the excess gas vapor, the flames whipping in the wind like giant Satanic birthday candles, all roaring without a sound for me to hear.  The wind blew away the noise.  These wells were miles away, but I could almost feel the heat

It was a Dante-like landscape.  Fire.  Dust.  Empty.

I wondered if a sinner went to a place like this if a stain remained on their soul when life departed?

The flames reminded me of orange Chili peppers.  I felt hungry but not enough to brave the numerous burrito shacks that lined the streets.  With my digestive history, I knew I’d pay a dear price for eating the real thing.

I knew sooner or later, I wanted to taste the genuine burrito, not a Taco Bell version.  But, I had many miles to make this decision.  I’ll get brave.  Maybe I’ll manage to dance the 2-step again before we arrive at that odd spa in the Mojave Desert that I’ve been telling you about…you remember, the place that healed many bodies and souls…and hopefully mine.

But, that place is many miles from where I sit and type this post, here in the common room of the RV resort.  I’m looking out of the window, a cactus plant blocks some of the view I have of the pale blue sky, high clouds and the occasional car and truck a half mile away on Highway 285.

4 comments on “Mix Mesquite, Sage, Fire, Oil And A Dash Of White-Line Fever”