[Just to give you the right perspective.  We are a small fish in a large sea of RV’s]

I recently completed reading Deep South by Paul Theroux.  He is, arguably, the best travel writer working today.  His Great Railway Bizarre set a very high standard for that genre.  In Deep South, he begins by reviewing the styles of other travel writers.  Historically, he says, the wanderer often writes of how hard the journey is and complains a great deal of the difficulties encountered.

“The local food was exotic but I had to close my eyes to take a mouthful.”

“The insects swarmed into my eyes and nostrils and ears in uncountable numbers.”

You get my point.  Theroux was saying that to complain was to miss the point of the journey.  A good book about a great journey is supposed to impart a flavor of the local dialect, food, and geography.  Most importantly, to me, is trying to listen to what a stranger has to say…listen for their story…listen to the local legends of the back roads and byways.

When people see our r-pod, the words we hear most are: “Oh, how cute is that?!”  I admit that it is indeed cute, but it doesn’t do a thing for trying to fit months of clothes, books and stuff into something that has rounded ends and no room for closets.

While Mariam has been away for a few days in New York City for meetings, I fully intended to work on my novel and have room to spread out and just think.  It didn’t work out that way.

Let’s start with this table I am writing this post from.  This space is either a table (for writing and eating) or its a bed…but it’s not both.  It takes time and effort to make the table into a bed…time I could be out looking at a cow, a horse or listening to a local tell me a tale or two.  So, to save me that effort, I’ve taken the bottom bunk (which is about three steps away from the table/bed, and moved the clothes (remember, no closets) to the table (when I’m not writing or eating), or to the top bunk, which is already piled with…stuff. 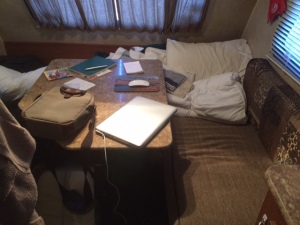 [My writing desk and dinner table and bed]

I will admit the lower bunk has a real “mattress” so that my back pain in the morning is not as intense as usual.  But, the back pain has been replaced by the pain on my forehead from knocking it against the bottom of the top bunk.  Laying in bed at night is a particular (and somewhat morbid) challenge.  I propped my head up on a pillow to read.  I looked up and saw the wood panel above me.  I measured the distance from the tip of my nose to the bottom of the top bunk.  I held my fingers apart and measured.  It was just shy of 4″.  I felt like I was the guest of honor at an open casket funeral.  Now I know how Bela Lugosi felt between takes of Dracula, while he waited for the cameras to be moved.  Now I know how Bela Lugosi feels now. 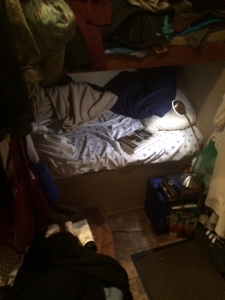 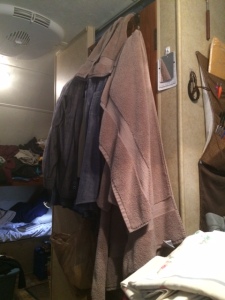 [There is a bathroom/shower behind these towels]

About fifty feet from where I’m siting, is a large blue mobile home…a bus-like affair.  A woman ties her little black dog to the BBQ pole and goes off to do laundry or drives away to shop.  The dog yelps and barks until she returns.  And, I’m supposed to concentrate on maintaining a narrative line in my novel-in-progress?  I can’t.  I’m easily distracted.  So, I escape to a nearby Starbucks.  We have a ‘card’ so when I buy a Cold Brew or a hot dark roast, I feel like it’s free.  I sat yesterday in an overstuffed leather chair and began to take notes on my characters when a large number of students from the University of Texas at Arlington came in.  At a table near me, three young men were huddled around a laptop.  One of them was telling the other two about his new idea to create a website to help other people find websites.  I realize that this could be the next Zuckerberg, but he didn’t have to tell the entire coffee-house about how many pixels he was planning to use, or what CSS meant.

I came back here.  The dog was inside, but I could still him/her barking…in that plaintive yelp that means: “I’m annoying everyone around here, but I’m so cute!”

I waited for darkness.  There was a beautiful crescent moon in the western sky (I thought I was in the west??).  I decided to do a load of soiled clothes in the nice warm laundry room.  I was hoping to catch the State of the Union speech (our TV has no reception), but a heavy-set woman was watching a martial arts movie.  She had a cough that would frighten a brown bear.  I didn’t want to catch some strange Texas respiratory ailment, so I darted back and forth to the r-pod and the laundry, trying to win a game or two of Scrabble with a high school friend, Jackie B.

Which brings me to our car.  The rear hatchback has been stuck since early December, 2015 while we were in Florida.  Just for fun, I tried pushing the button and much to my surprise, it opened!  I lifted it up and a bag promptly fell out and a bottle of red wine broke on our bumper.  I sprayed WD-40 all over the latch and succeeded in mixing that with the spilled wine.  That’s why I was doing laundry last night.

I didn’t have a banner day on Tuesday.  I wish I was back in Vicksburg, sitting in the back of The Tomato Place and chatting with Mallory, Luke and Angela.  Life was so much simpler a week ago.

But, y’all know where I’ll be on Friday night.  I’ll be in Austin, doing the Texas 2-Step…making strange squeaks with my rubber bottom soles.

My birthday is coming in May.  I want a new and bigger RV…and I want a pair of cowboy boots.  Just like the ones I had when I was five years old.  I wasn’t in Texas, I was in my backyard.  And, my dog, King, didn’t bark…to much.

[“You can’t lose if you close a blog with flowers”. My grandfather once told me.  These are roses,  They’re not yellow, but they’re from Texas]

2 comments on “Night Of The Living Entropy”