Is it possible that a eulogy can take forty-one years to deliver?

The dreaded answer is yes.  I know because I spoke that eulogy…silently, silently so that only I heard the words.  It was a rambling prayer over a heart-breaking death.  I knew the young man who had died.  In truth, I was with him when he passed away, away into the unknown world that we all dread…whether we admit it or not.

He is interred in the soil of his hometown in sunny and warm Louisiana.  His soul departed on a snowy trail, on a cold night in the mountains of the Adirondacks.

I’ve talked to him, about him and prayed for him for four decades.  Our conversations weren’t all one-sided.  I felt his presence.  I felt his answers.  I’ve felt his forgiving words when I find those occasional moments, when the moon is rising and the air is crisp and the snow is five inches deep…just like it was that night in November of 1974.

Once before, many years ago, I stood over his grave.  I remember that day.  It was unbearably hot in the southern sun.  I thought then of how I was so near him in such an opposition of environments…from when we last walked side by side.  Now, I’ve returned with time heavy in my arms and dried wildflowers of the North Country in my hands.  Now, the temperature is at a mid-point…from that night to this day.  It’s 55 degrees.  There are pine cones on the ground…not a flake of snow within five hundred miles.

Yes, I’ve talked to him and relived our friendship when I stop to recall memories, those sweet and terrible memories.  I’ve spoken to a few people about him, but I have never, until now, written a word about my friend.

I’ve waited too long and kept too many recollections lock away in my heart and brain.  I need to share these with you.

We met in a hallway at the college I attended in Louisiana, or perhaps we met at the Pizza Inn where we worked evenings to earn a few extra dollars.  I have never encountered a more curious individual.  He picked my brain for hours about what life in the North was like.  At the Pizza Inn, we were often left with the task of closing for the night.  But, we wouldn’t simply clean-up and lock-up.  No, after the lights were turned off, and before the ovens were shut down for the night, we would make a pizza, the likes of which was never seen on the menu.  We’d lock the front door and find a booth in the back dining area.  And there, by the light of a single candle (we didn’t want to attract the police who would be checking the locks on the doors of the businesses along the avenue), we would drink beer, eat pizza and talk for hours.  We’d argue.  We’d laugh. We discussed the philosophy of life.  We talked about women.  We talked about racism. (He was the farthest thing from a ‘redneck’ I ever encountered in my years in the 1960’s South.)  More than once, when we left for our cars, the eastern skies were getting light.

Time flew for us when we had important matters to ruminate about.

A few years later, after I graduated and moved back to New York State, we kept up our friendship through letters.  We had a chess game in progress for months, sending moves to each other on post cards.  I don’t remember whose turn it was when our game ended so abruptly.

He was curious about life outside of the South so he moved to Binghamton, where I was living.  He got a job.  I moved to Pennsylvania to begin a career of teaching.  He wanted to join me on a hiking trip to the Adirondacks over the Thanksgiving break of 1974.  I said yes.  I wish I hadn’t.

I will place this humble bouquet against the headstone.  My wife will stand at my side.

I will say a prayer for him to a God who I feel has been too quiet for too long.

My private prayer for the dead will start with his name.

[This is not Steve’s epitaph, but it could and should be.  I found in on a gravestone of a nine-year old boy named Addison Foster, Jr. in the City Cemetery of Natchez, Mississippi] 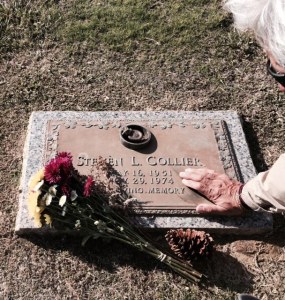 4 comments on “A Silent Eulogy: Late But Heartfelt”