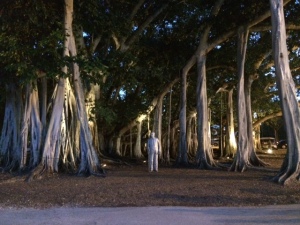 [The Banyan tree with a bronze of Edison standing guard]

We arrived about thirty-five minutes before sunset.  Heading for the admission window, we passed the largest Banyan tree in Florida.  There was a family on the path in front of us.  I heard the mother:

“Isn’t that amazing that this is one tree?”

We walked past the tree and I nearly stumbled over four people.  My attention was directed at this tree, this 3/4 acre tree, this alien-like plant that looked like it came from a moon that orbits a planet we haven’t found yet, this wonder of God and Nature.  It’s hard to put words on paper that would accurately describe the feeling I had when I looked at this tree.  The longer I stared, the more I saw…and felt.  If the Nymphs, the Dryads, or the Lauma live, they live in the Banyan.  To say that it “blew me away” sounds trite and immature.

And, the Banyan trees walk!

We’re down to nine days before we depart Fort Myers.

“Let’s go see the Holiday Nights at the Edison/Ford estates,” I said to Mariam.

In the late 19th and early 20th century, Thomas Edison, Henry Ford, Harvey Firestone and other extremely wealthy shakers and movers of industry, had winter homes here in Fort Myers.  These estates have been lovingly and intelligently restored and it is possible to stroll among the gardens and pools and ‘cottages’ that spoke of a time in the past when a heated swimming pool was a rarity. 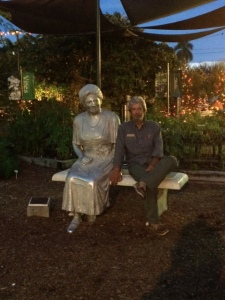 [Mina Edison and me.]

Henry Ford made cars, in case you haven’t heard.  I drive a red Ford.  Thomas Edison invented the light bulb.  But he was also intrigued by botany.  He planted the Banyan tree in 1927 as an experiment.  He was looking for a material that could be a cheaper method to produce rubber.  No wonder Ford and Firestone wanted to hang out with the guy. 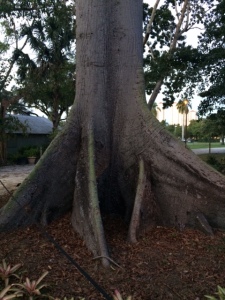 We walked the paths and poked our heads into the dining rooms, libraries, kitchens and pantries of the Ford and Edison homes.

I bought two “Welcome To Florida” postcards, done in the old style of the 1940’s.

We left the parking lot and drove down McGregor Boulevard, keeping an eye out for a nice restaurant.  I thought about the teenage girl and wonder if anything she had seen that night impressed her.

Maybe the 1,200+ patents that these two men held?  Maybe the thousands of lights on the palm trees?  Maybe the museum with a working model of a Model T (or was it an A)?  Maybe the dolls that were on display in one of the family rooms?

Maybe nothing impressed her.

Me, I pushed the button on the radio of my Ford Escape and began to listen to my favorite country music station.

We were just approaching the restaurant on McGregor when I heard another memorable song:

“Prop me up beside the juke box if I die.”

This guy’s main concern about death was that he had a stiff (no pun intended) drink in his hand and was left against a juke box.

Now, that was impressive. 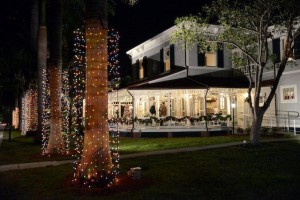