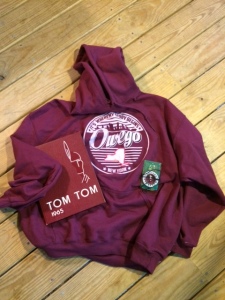 In this lecture we will explore the migratory habits of certain unusual groups of animals.  Let us begin by taking a glance at the Puffins of the North Atlantic.  They migrate to a big rugged and very isolated rock somewhere in the waters of the Atlantic.  There they breed.  Then they migrate somewhere.  It’s totally fascinating.

Now, let us consider the famous Swallows of Capistrano, California.  According to legend, they arrive at the mission on October 23, almost always on that date.  Pretty interesting, huh?  Then, on or about March 19, they circle the mission at San Juan and then depart.  Some say its a miracle.  Some say they just like the warm weather.  But you can bet that they will do a lot of breeding while they’re in California.  Isn’t that what California is for?

However, recent studies have uncovered a rather new group of migrating animals.  These would be the Owegoian alumni, which are rather new to the list of migrating groups.

It seems that each year that ends in a “0” or a “5”, this small population will make their way from far-a-way places, such as North Carolina, Georgia and the Adirondacks of New York State to gather in a ritual that has been termed a “reunion”.

The next such gathering is expected to occur very soon in the Southern Tier town of Owego, New York.

Experts who study such phenomena are wondering whether breeding is to be a part of this gathering that is soon to happen.  Some investigators say that the population is getting too elderly to partake in such risky behavior as breeding at this stage in their lives.

One comment on “The Migratory Habits of the Boomers”