I thought I’d write to you today.  It’s been such a long time since we had a chance to sit and talk about things.  I have so many memories of you, I don’t know where to begin.  It was so long ago.

Remember when I was a little boy?  You lived with Grandma in a big white house beside a lake in Pennsylvania.  In all the time I was growing up, you never had to go off to work in a factory or a coal mine.  You did all those things before I was born.  You spent your time tending a little garden behind the big house.  Once you showed me how to graft two different apple trees together.  I was amazed when, a year later, I could go out to the tree and have a choice of different apples on one tree!  Your garden had several fruit trees and I remember at the far end of your rows of plants was a steep bank that led up to an old railroad bed.  There was a short path up the hill.  In the far corner of your garden, you had a little white shed.  I think it was once an outhouse, but I was never sure.  There were so many hoes and shovels and rakes, sacks of seeds and old bottles, that I could never see whether there was a potty hole or not.

When my family would drive down to visit you from our house in Owego, NY, we’d almost always find you on an old chair beside your shed, sitting in the shade.  Or, under the big apple tree in the yard…always sitting in the shade.  Every time we saw you, there was a pipe either in your mouth or in your vest pocket.  I remember that you had a strange pipe lighter, not like a Zippo or Bic.  It was silver and round.  It was the size of my thumb.  And, you’d push it together somehow and there’d be a flame to light your pipe.

I would always run up to you and hug you and say: “Hi, Grandpa!”  When I was a little boy.

Once my brother and I found you on the front porch…in the old rocking chair.  We begged you to tell us a ghost story.  But you said you didn’t want to scare us.  You said that sometimes when you think about those things you couldn’t sleep.  You gave in one time and told us how you were walking home from a day in the mines and you saw a friend sitting on the stonewall of a cemetery.

You reached in your back pocket and broke off a plug of chewing tobacco and gave it to him.  You talked with him for a few minutes and then you walked on down the street.  A few blocks away, you stopped in your tracks.  You remembered that the guy had died three months earlier.  You said you’re not supposed to look back over your shoulder when you see a ghost so you ran the rest of the way home.

That story did scare me.  When I was a little boy.

I remember that you always planted potatoes in your garden.  My brothers and I giggled when you told us that for good luck, whoever planted the potatoes, had to pee on the first mound.  And, you always did, but it was never when we were around.  I wondered for years how you managed to pee on the correct potato mound in the dark of night.  Did you hold your flashlight under your arm?

Whenever one of us tried to talk to you, you always leaned over and said to talk louder into one of your ears, saying you were hard of hearing.  But, sometimes you heard us just fine.  My father thought you were “deaf” only when my grandma was trying to tell you to do something.  I still wonder about that.

Well, Grandpa, have I got news for you!  I have a grandson now!  That makes me a grandpa, just like you.  When I was a little boy.

His name is Elias and he is your Great, Great, Grandson!  He’s very adorable. (Did you think I was adorable when I was little?)

Well, I better say good-bye for now.  I’ll be seeing you sometime…someday.  We’ll have so much to talk about.  Maybe, if I’m lucky, you can tell me more ghost stories.  I don’t think I’ll be afraid to hear them when we talk again.

We’ll sit under a tree and I’ll watch you light your pipe again.  I’ll make sure we’ll be in the shade.

I think I’ll go and poke through some boxes for those old 8mm home movies my dad took of you.  I saw them a few years ago.  You didn’t seem to change much over the years.  But, I have.  A few weeks ago, I was visiting my grandson and someone took a short video.  Someday, maybe Elias will look at it and see himself as a child.  And, next to him will be an old gray-haired man.

In the old jerky, flickering films, you were holding me…when I was just a baby.  There is another one when you and I are walking, hand in hand, down the old railroad bed.

I was just a little boy.

P.S. Here’s a picture of your Great, Great, Grandson, Elias:

P.S.S. Here’s a picture of your Great Grandson, Brian: 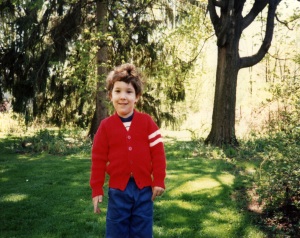