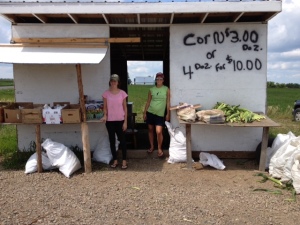 In northern New York State, in late summer, hot sunny days are not uncommon.  It was the height of the corn season.

I practically left skid marks on Rte. 37 when I saw the corn stand to my right.  I had once been scolded by the robotic female voice on my GPS about making illegal U-turns, so I drove another quarter of a mile before there was a safe place to pull over and head north…north to the corn stand.

My father always told me: “Knee high by the Fourth of July,” when we were kids and awaiting the first crop of corn-on-the-cob.  My three brothers all had their own ways to attack an ear of freshly boiled corn.  Me? I usually went for the “Remington” style.  Approach the cob like it was the roller on a typewriter.  Chew non-stop from one end to the other and then drop the carriage and continue in the opposite direction.

Every once in a while I would stop to chew and swallow.

I had a deep hankering for fresh corn that day in late summer of ’13.  When a man knows what he wants…well, he has to turn around sometimes and go backward to get it.

And, that’s what I did.  I pulled into the dusty parking lot.  The little white stand was hard by the cross-roads (and we all know how magical cross-roads can be).  The small white shack sat at the edge of the cornfields.  The stalks seemed ten feet tall.  There was a faded red pick-up truck nearby…it’s engine idling.  A ruddy-faced farm boy of perhaps seventeen was unloading giant sacks of corn, freshly picked, and putting them on the ground in front of the wooden troughs where buyers could paw through them.

Two teenage girls, probably juniors or seniors in high school were working the stand that day.  An old cap and a bandana hid their hair.  The tee-shirts were plain, one green and one pink.  One wore cut-off shorts and flip-flops revealed dusty and sweaty legs.  The other wore unseasonable black pants.  As fast as the corn was unloaded by the boy, they would package them in bundles of a dozen…for those who wanted the corn quickly and didn’t care to peel a bit of the husk and peek at the kernels.  Cars came and cars drove off.  The dust made me sneeze.  I bought a dozen ears.  The girls took a rest.  They stood together in the doorway, safely out of the blazing sun.  I asked if I could take their picture.  They looked at each other and giggled.  Sure, they said, wondering why I was so interested in them.  I took a photo and posted it in a short blog about the “corn girls”.  Another middle-aged man with fantasies, they were probably thinking.

I thanked them and drove off.  The corn was memorable.

So, why was I driving north on All Souls’ Day in 2014…when the first dusting of snow had appeared on my lawn a few hours earlier?  I was going to look for a tree.  I had heard about a tree that held onto its golden leaves well into the early weeks of winter.  I wanted to see the tree.  I wanted to see the gold against the brown and grey of the already naked trees that covered the hillside.

I sat in the parking lot and looked at the shack.  The price of corn for the summer of ’14 was painted on the wall.

I worried.  Were they well?  Did they graduate from the Malone High School and go away to college, perhaps ashamed to tell their new roommates how they earned their extra money.  Did either of them get pregnant and was pushed into a marriage they didn’t want?  Was it the boy who unloaded the sacks of corn?  Did their families move away to Rochester or Buffalo?  Did they find better paying jobs at the Kinney’s or Wal-Mart?

Most of all, I wondered if they were happy.  Did they still look forward to their lives like they did when they sold me a dozen ears in ’13?

I got in my car and went looking for the tree that might still have its leaves.  The corn girls didn’t need to hear me telling them anything.

It’s just a fantasy of a middle-aged man. 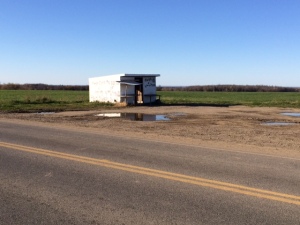 One comment on “Where are the Corn Girls of Summer?”