Just when I thought I knew nearly everything about the Victorians, something falls into the lap of my experience that amazes and astonishes even my jaded mind.  The great Age of Victoria (who ruled England from 1840 to 1900) gave us such interesting societal practices that continue to delight us…and frighten us.  The era gave us Jack the Ripper and Downton Abbey.  I mean, what more do we really need to know about life back then?  Foggy London and high-born people of the Manor House…that’s about it.

As far as the so-called “Victorian” attitude toward sexual mores, well, ahem, don’t we all know what really happened?  Somebody was making babies, somewhere in England in the late 19th century.  After all, they needed a fresh crop of young men and women to send into the fields of Flanders to be blown into small bits by the Kaiser’s army.  (It’s interesting to note that most of the ruling families that fought against each other in WWI, were related!).

The Victorians did have a rather fascinating view of death.  The incidents of premature burial (before ‘clinical death’ was clearly defined) was common enough that many people were terrified of being buried alive.  I don’t think I’d care much for the idea, myself.  Something like that happening can ruin your whole day.  A number of wealthy oldsters, when planning their own funerals and tombs, would have a bell system installed.  That way, if they woke up in a casket, all they had to do was pull a string and a bell would ring in the caretakers office. Imagine the poor cemetery worker, sitting by a tiny fire in a little cottage inside the walls of the graveyard, hearing the bell go off.  (Now, there’s a blog!!!).

It was also the fashion among some families to pose the deceased in such a way to deny the finality of death.

Here is a photo that I took from somewhere on the Internet…probably Pinterest.  This image is not a fake.

Look closely at the picture.  The women are sisters.

The blonde woman is dead.

What do you think?  Comments anyone? 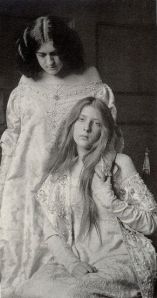 One comment on “Waiting For All Hallow’s Eve X: “Those Wild and Crazy Victorians””