There are creatures that can crawl up a wall, head down, in an upside down position (like a spider), turn themselves into bats, rats, moths, mists, and clouds of dust.  They ‘live’ by sucking the blood of a live person.  We call these demon-like beings vampires.  They would not make very good neighbors, although, I’ve lived next to people who can do pretty much all these things…but that’s a another story.

A vampire can’t do everything (although in modern days, they can do much more than tradition tells us, i.e., go out into the sunlight.)  They cannot cross running water (movie lore), and they cannot enter a room without being invited.  A vampire abhors garlic (a recent addition to the lore)…but it’s the Crucifix that will usually stop them in their tracks.

Vampires are hot these days…or should I say cold.  The adventures of the Undead, as a role model for teenagers, started long before “Buffy: The Vampire Slayer”.  “My Best Friend is a Vampire” probably was released around the time that “I Was a Teenage Werewolf” made a big star of Michael Landon.  My first experience of a vampire on the big screen was a re-release of “Dracula”, with Bela Lugosi (1931).  In the mid to late 1950’s, came the Hammer Films series that starred Christopher Lee as the Prince of Darkness.  I believe it all started with the 1957 “Horror of Dracula.”  It was followed by sequels, one of which played up the sensual/sexual nature of the vampire/victim relationship so clearly, it was not released in the USA for quite a few years.

For those of you who disdain vampire legends and have not done your homework, you will need this brief outline: The novel that popularized the character of Dracula was the book of the same name, written by the Irish writer, Bram Stoker in 1897.  He based the main character on a real person in history.  This would be Vlad Tepes III, Prince of Wallachia (1431-1476).  He was nick-named “Vlad the Impaler” for reasons I won’t go into here.  Use your imagine.  But this guy was real.  He did unspeakable things (refer back to his nick-name).  He lived in the part of central Europe that has long been known as Transylvania, in central Romania.  I cannot give the details about a woman who was a real-life counterpart to Vlad.  She was a Baroness or something in a small region, probably Transylvania.  She felt that to keep her beauty and youth, she needed to bath every so often in a tub of virgin’s blood.  So she sent her henchmen out to locate and kidnap the virgins of the village.  I’ll go no further in a description of what she did with the young girls and how she bathed in their blood…let’s just say she managed.  Between her and Vlad, she kept the female population of a fair number of villagers from ever reaching womanhood.  Together, they made Jeffery Dahmer look like Bobby Flay. (Maybe Bobby’s last name made him a bad choice to use here).

I wish I could remember the name of this woman…but it’s getting late in the afternoon…the sun is low in the sky.  So I must hurry to finish this before darkness descends on the North Country.  Too bad I used the last of the garlic cloves in a pesto sauce last night.  I wonder if garlic powder will work?

From books I’ve read, the belief in vampires still exists in remote villages in this region.  In fact, there are accounts of vampires who lived and “worked” here in America…and quite recently.  Google it.

A defrocked priest (now, that’s always worth a story to look into) named Montague Summers wrote many books on werewolves, witches and vampires.  His 1929, “Vampires and Vampirism” is a classic.  Anne Rice popularized the genre with “Interview With A Vampire” in the 1970’s.

[Vlad the Impaler in a historical painting] 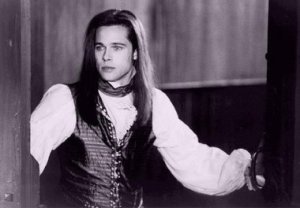 [Brad Pitt from “Interview With A Vampire]

Why have I chosen vampires as one of my Halloween posts? I think it’s pretty obvious.  But, most the most amazing fact about these fictional (?) characters is that people did and still do consider them as real! If you find yourself wandering through an old cemetery and you come upon a caged grave, it’s a good chance that the deceased that lie here were thought to be vampires.  The cages were put in place around the grave to keep them in.

[Please note: The idea that graves were caged (like these in Edinburgh), were to keep the dead in has recently been debunked by scholars.  Now it is claimed that it was more to protect the recently deceased from grave robbers.  Other details concerning Vlad have also gone through historical revisionism.  I like my versions better.  Like I say, “Never let the facts get in the way of a good story.”]

What makes the vampire legends compelling to me?  It’s the fact they represent the ultimate in true tragedy.  What was once a human soul…cannot die!  To wander the earth until he or she is standing at the Gate of Judgement must be unbearable.  And this brings a second aspect of tragedy: a vampire can be released (killed) by having a stake of “white wood”, ash, or oak driven through the heart.  And, there is the third element of tragedy.  Who does this deed?  If it’s a loved one, imagine the anguish one must go through to “kill’ someone you love so that they can find true death (and happiness).

It’s a good thing these are facets of fiction…or are they?

What is shown below is not a toy box.  It’s a real 17th century vampire hunter’s kit.  (If this is something you would buy your child, you need to seek professional help immediately.) 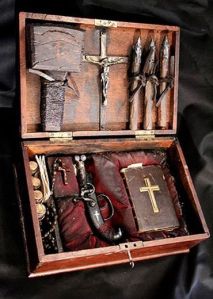 So, after you’ve read this post, make yourself a hot toddy.  Soak in the hot tub.  Get a good book (one by me, perhaps).  Check your windows…are they locked?  Are all the doors bolted?  Is you’re cell phone by your bed?  Are you ready to sleep?

Do you hear something? A creaking, a groan, clanking of something metallic?

It’s only your house settling down for the night.