Footpaths are as common in England as salt grains on a Big Mac.  (I’m not sure that metaphor works here, but I’ve been wanting to use it for decades.)  Unlike the States, the lines between private property and the pubic right-of-way are a bit foggy, like the desolate and lonely landscapes of Dartmoor and the Yorkshire Dales.  But, it’s not a free-for-all, by any means.  There are rules.

First, there is the obvious and gentle–always latch the gate you pass through.  That way, the sheep, cows and goats stay where they belong.  However, in Devon, that hypothesis doesn’t apply.  The sheep, ponies and cows are often found in the middle of the roads, causing you to slow down from 20 mph to 4 mph.  (An aside: Boy, are those sheep looking fat!  I wondered if it was the 345 lbs of heather and grass they chew 24/7 or because of all that wool?  I know when I wear my wool trousers, my butt looks fat, so maybe that’s it.

Another rule is to make haste when crossing a field that has been signed: Bull Present In Next Pasture.  When I’m in that situation, I do the only correct thing–I send my wife ahead when she has her bright red Helly Hansen parka on.

If you’re with your dog, King, there is a sign that carries a severe warning: Dogs Found Worrying Sheep Will Be Shot! This is for real and it’s happened.  Nuff said.

Onto the stiles.  Sooner or later, you have to cross from one field to the next.  The cattle gates are often locked so a stile is provided.  This is usually made of wood, but stone stiles are not uncommon.  Their design is simple and functional.

First there is the single-step stile.  [See example shown below]  It’s very simple to navigate.  Just get a leg up and over.  If it’s mossy or wet (it usually is–it never stops raining in England), then take extra care.  Otherwise, you’ll end up in a sordid and fetid mix of mud and cow dung.  That stuff will really do a number on your $400.00 Burbury jacket.  If there’s a rock hidden in the muck and you lose your footing, expect to spend at least two hours in a coma. 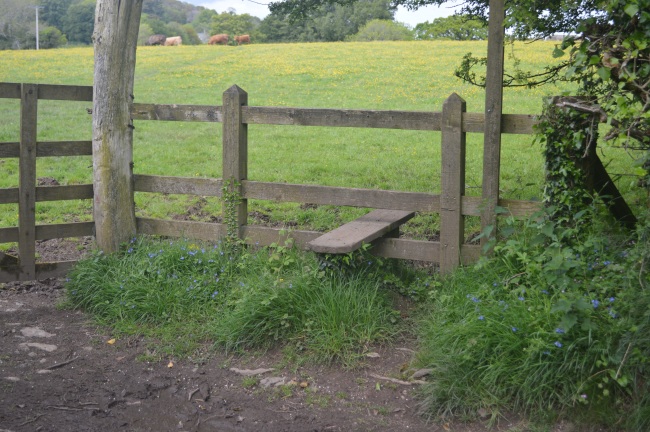 If you have a particularly high gate to cross, there may be a double-step stile.  [See below]  Stone stiles are simply rock versions of the above.  You’ll have to imagine what these look like because I can’t locate the photos in my picture file.  These, again, if slippery, can make an omlette out of your kneecap. 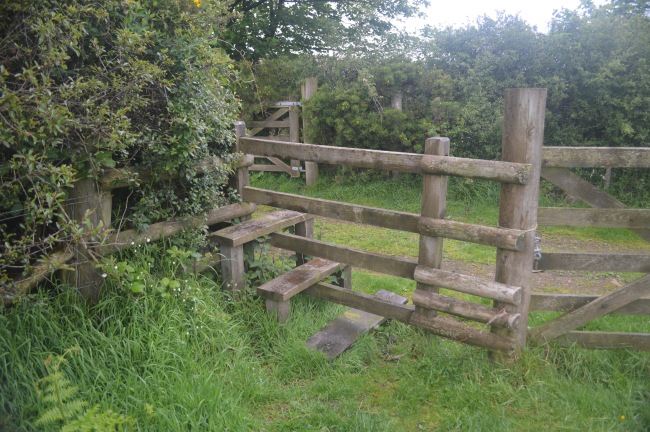 But the coolest stile by far, is the famous “Kissing Gate”.  These are designed to allow only the first person to pass through (or rather around) a swinging gate.  The first person, once through, waits for the next person–and before person number 2 can get through, person 1 must kiss them.  This works really, really well if you’re walking with Miss Ohio or the Prom Queen.  But, if you’re with your mother-in-law, brother, father, mother, sister or a blind date from hell, things can get dicey.

There has been some talk among the modernists who think that these gates are a tad too quaint for the 21st century.  I say: Let them stay.

If, by any misinformed action, the kissing gates are removed, I predict that the birth rate of England will see a significant decline.

One comment on “Passports 13: Getting a Leg Up–An Introduction to the Footpath Stiles of England”