The river rolls on, like a sad lover’s song.

But is it the beginning or the end?

Flowing water has always held a fascination with me.  I grew up with the great Susquehanna river drifting past my backyard.  Sometimes, during flood time in the Spring, it would be in my backyard.

The Susquehanna begins it’s journey to the Chesapeake Bay at Cooperstown, New York.  Otsego Lake is the source of this historic drainage.  I took part in the first General Clinton Canoe Regatta in 1963.  Since then, the race draws thousands of fans and hundreds of paddlers.

Standing beside the Falls of the Niagara, I become fascinated with the sensory overload and the hypnotic effect massive Falls can be.

I’ve camped at the highest lake source of the Hudson River when I was a young strong backpacker.  It lies tucked against Mount Marcy, the highest peak of New York State.  Later, I would live three blocks from that river as it entered into New York Harbor.

I’ve stood on the south rim of the Grand Canyon and contemplated what millions of years and a river can do to a landscape.

I rolled up my pants and waded, illegally, from Texas into Mexico.  The surprise to me that day was the frigid temperatures of the Rio Grande.  The other surprise was the handful of Mexican soldiers that began to descend a hill to intercept us.  We waded back into Texas.

Today, I sat in stalled traffic along side the Charles River in Boston.  I was trying to get back across the river to the Cambridge side.  As I sat in the car, listening to a woman talking about death on NPR, I looked out at the various watercraft that were moving about the river on this Sunday afternoon.  There were crew teams from M.I.T., Harvard and Boston University.  Tour boats ran about.  Kayakers and canoeists that were working out in small groups, like a line of ducklings following the mother.  There was the occasional Turtle boats that can drive on the roads and then move to the water.

The Charles River, flowing past the gingerbread boathouses of the college crews, is a vibrant river.  Towns that are lucky enough to have a water artery flow nearby should make as much use of them as they do with parkways, bike paths and jogging paths.

To carry ashes of the dead like the Ganges.  To deposit life-giving fertile soil like the Nile.  To move pioneers westward like the Missouri.  To gamble on and drain the major part of North America like the Mississippi.  To cross and make history like the Delaware.

To drop into the cool water of a river from a vine or rope is something every child should do once their lives. 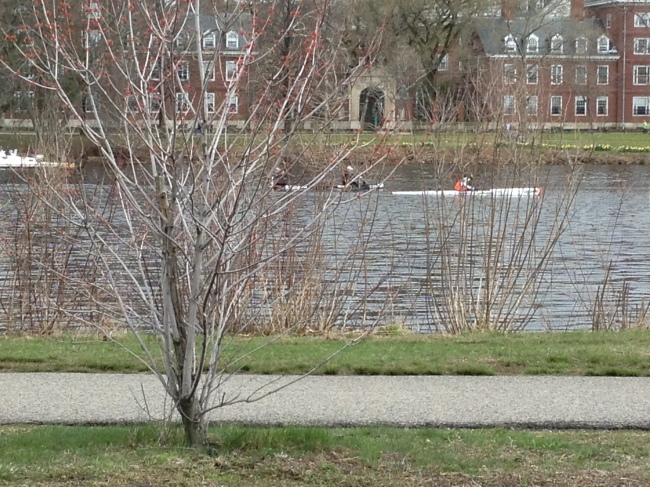