Normally I’m not averse to looking onto a rooftop of a building and seeing an unclothed female.

However, here it is on New Years Eve and the temperature in New York City is about 20 F, with a wind chill of -36 F.  The wind from the Hudson River a few blocks away can cut right through any fabric known to man or woman (except for stuff that NASA has hidden in airplane hangers in Nevada) or garments made from directions from some survival manual and manufactured by a guy whose screen name is “Skeeter” who lives in a trailer somewhere about three hundred miles from Las Vegas.

I’m staying in a friend’s apartment on the Upper West Side.  She’s in London visiting her daughter.  I’m recovering from back surgery and I’m getting pretty bored.  How many pages of Underworld by Don DeLillo, can you read in a day?  I was told NOT to do any BLT’s.  For those of you fortunate to still have the back you were born with, that would be NO Bending, Lifting or Twisting.  This is not any easy regimen when you’re laying on a pull-out bed and your torso wants to face north and your legs want to go south.  That’s the hard part.  The bending and lifting is something I’m glad to leave to someone else…like my wife.  Hey, she’s a nurse.

I shuffle over to the window and look down on the above mentioned rooftop.  So there’s an unclothed female.  Let’s not shy away from the obscene…she’s naked!  This is not a really huge surprise to me because, well, one can do pretty much anything in this Great City…and standing naked on a roof is actually no big deal.  I’ve seen it dozens of times (too bad I wasn’t awake during those dozens of times).

I tried to raise the window.  It was stuck…only open about three inches.  I braced my self against the sill and window frame.  I had to be careful, I was alone.  My wife had gone shopping at Fairway for some much-needed ice cream.  I asked for the Salted Caramel flavor.  Salt and caramel?  Salt goes on peanuts and roads and mashed potatoes…but with a sweet like caramel?  I dunno.  I didn’t care.  I loved it, and by the living God that made me, I deserved it.

The window.  I watched her with curious intent bordering on voyeurism.  I’m a man, am I not?  It’s in our genes.  Then I noticed that she held a horn to her lips. (I failed to mention that her back was to me, shyly, but without apology.)  She stood very still.  I couldn’t blame her, I was cold in the apartment.  She was demurely and partially hidden by a potted evergreen.  From where I stood, I think they were cedars…but I could be wrong.  In New York City, you never know.

I leaned over with some effort.  I was not bending!  I was hold firm to the window frame.  I put my mouth down to the three inches of openness and called out: “Happy New Year”.  She never acknowledged a thing.  But I’m used to that.  Clearly she was saving her breath to blow away on her horn, like a female Gabriel at the gates of heaven.  I stood up straight and stared.  She didn’t move.

Okay, ignore me, I thought, before going back to the TV to watch the ball drop in Times Square.  It was Ryan Seacrest in place of Dick Clark.  I studied Seacrest.  Yes, I now believe he will inherit the Rockin’ Eve Party for years…decades to come.  He has a mirror in his attic, just like Dick Clark did.  In about seventy-seven years, he will pass the mike to someone who’s not even born yet.

I went back to the window and yelled “Happy New Year” again.  Still she didn’t even glance over her beautiful left shoulder.

I’m being ignored by yet another naked female in New York City.  So what’s new?  I looked again at her shoulder.  The hue was that of weathered copper.

I studied her back, her hair and the hand holding the horn.  She never moved a micron, I’m sure.

I was yelling “Happy New Year” to no one and to everyone. 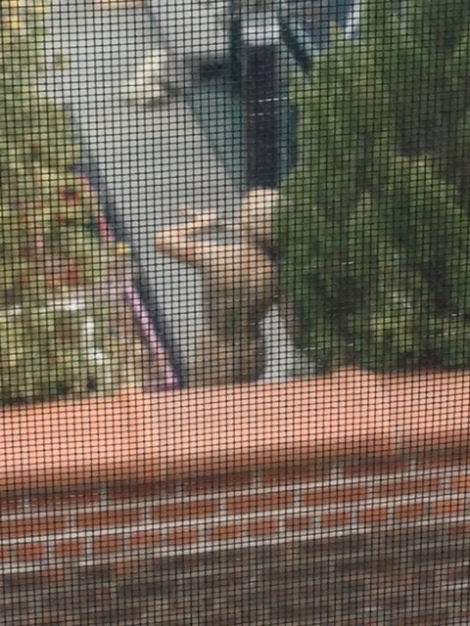 2 comments on “Throw The Lady a Sweater”